Disney's Hollywood Studios marked its 25th anniversary in grand style this evening with a spectacular fireworks show honoring the park's attractions. The fireworks featured music from the Twilight Zone Tower of Terror, MuppetVision, Beauty and the Beast, The Little Mermaid, Star Wars and more.

Walt Disney Parks and Resorts Chairman Tom Staggs has just announced at the dedication ceremony that the Seven Dwarfs Mine Train at the Magic Kingdom will be opening on May 28 2014.

“Seven Dwarfs Mine Train is both literally and figuratively the centerpiece of New Fantasyland, so we knew it had to be something special,” Staggs said. “The attraction appeals to everyone in the family and provides just the right blend of heart, humor, and thrill while keeping with the charm of this special land.”

Staggs was joined at Friday’s dedication by Snow White and all Seven Dwarfs who proudly brought their freshly-mined gems: buckets of glowing diamonds and jewels and wheelbarrows stacked with oversized rubies, emeralds and sapphires.
“It’s my honor to dedicate the Seven Dwarfs Mine Train, which we think will become an instant classic in New Fantasyland,” said Staggs.
FastPass+ reservations can now be made for the Seven Dwarfs Mine Train from May 28 2014 and onwards. You can currently only do this on the main web site. it is not available on the mobile app.

Disney has  announced plans to rename the Polynesian Resort, a new look for the lobby, and Trader Sam's lounge. The resort will be returning to its original name, 'Disney's Polynesian Village Resort.' Opening in 2015 will be Trader Sam’s Grog Grotto — based on the popular themed lounge at the Disneyland Hotel in Anaheim, Calif.

Disney has announced the details, pricing, and that reservations are now available for Harambe Nights.

From the official Disney Parks Blog:

It all begins with a Welcome Reception in the park’s Harambe Village, including mouth-watering appetizers and African-inspired wine and beer. Then it’s time for the ‘mane’ event! Take your seat inside the newly built Harambe Theatre for an unforgettable performance of “The Lion King – Concert in the Wild.” This all-new, never-before-seen theatrical experience features a live orchestra and choir, dancers, digitally projected movie moments, and dramatic lighting and scenic elements – all hosted by a celebrity guest narrator. The show brings to life the humor, heart, and stirring emotional power of Simba’s journey to find his place as the Lion King.

After the show, the celebration continues with the Harambe Nights Street Party, filled with music, characters, and live performers, encouraging everyone to join in and “Go wild!” You can enjoy an all-inclusive buffet of sophisticated and flavorful African cuisine and gourmet desserts. Exclusive Lion King merchandise and collectibles will be available for purchase during the event, and you’ll want to stick around for a special finale to bid “kwaherini” to a magical evening that could only happen at Disney’s Animal Kingdom!

Disney has revealed concept art for the new night show heading to Disney's Animal Kingdom.
According to Disney, “Rivers of Light” promises to be an innovative show unlike anything ever seen in Disney Parks, combining live music, floating lanterns, water screens and swirling animal imagery. The show will magically come to life on the broad, natural stage of the Discovery River, between Discovery Island and Expedition Everest, delighting our guests and truly capping off a full day of adventures at Disney’s Animal Kingdom.

No opening date was given.

Tickets are now on sale for the 2014 Mickey's Not So Scary Halloween Party.
Here are all the dates and pricing details.

Tickets are also now on sale for the 2014 Mickey's Very Merry Christmas Party. Here are all the dates and pricing details.

For the first weekend, available show are: Behind the Force - Star Wars: Rebels, Obi-Wan and Beyond starring James Arnold Taylor, and Stars of the Saga Star Wars Celebrity Talk Show.
The shows are included in tier 1 of the FastPass+ selection group at Disney's Hollywood Studios, which is also the group containing Toy Story Mania, Rock n RollerCoaster and Fantasmic. One selection is available from this group.

With the opening of the Seven Dwarfs Mine Train Coaster on May 28, Disney will have completed one of the largest expansions in the Magic Kingdom's history. New Fantasyland construction began back in Spring 2010, and was completed in Spring 2014. Walt Disney Imagineering shot pictures from a fixed camera throughout the project, which now gives us the chance to see the entire project in a 30 second time-lapse.

Disney's Animal Kingdom will debut a new macaw experience this summer on Discovery Island.
Called 'Winged Encounters - The Kingdom Takes Flight,' the experience will give guests up-close encounters with the birds and experts, and a chance to see the macaws fly around the island.

Rehearsals are underway now, so you may just see a few macaws taking flight around Disney's Animal Kingdom.

The Winnie the Pooh and Tigger meet and greet at Disney's Animal Kingdom will have its last day of operation on Saturday May 10 2014.

You can find them currently meeting guests at the Discovery Island Character Landing. After May 10, they will continue to be available for meet and greets at Fantasyland in the Magic Kingdom.

A new soccer store will be opening at Downtown Disney West Side on May 22.

Just in time for the 2014 FIFA World Cup in Brazil, 'United World Soccer' will open in the space previously occupied by 'BLINK by Wet Seal,' located next door to Candy Cauldron at Downtown Disney West Side.
Want to experience the ultimate Star Wars Weekends day? For $499 per guest, you and your party can do just that.
Your VIP tour guide will take you on a number of experiences including:
●     Premium seating for Star Wars Weekends shows at the Premiere Theater, such as Stars of the Saga—a Star Wars-themed talk show that’s as entertaining as it is surprising
●     Expedited access to attractions like Star Tours - The Adventures Continue, Toy Story Midway Mania! and The Twilight Zone Tower of Terror
●     Private continental breakfast at The Hollywood Brown Derby
●     Reserved viewing location during the Legends of the Force Motorcade
●     Table-service lunch at Disney’s Hollywood Studios

Plus, after your VIP Guide concludes the tour, you’re invited to continue this adventure by discovering the perfect end to your Ultimate Day—whether exploring the park on your own or enjoying a VIP viewing and dessert party for the all-new Symphony in the Stars Fireworks!

The Ultimate Day at Star Wars Weekends is available for $499 per Guest (tax not included) and takes place every Friday, Saturday and Sunday, from May 16 to June 15, 2014.

For booking, call (407) 934-7973. Advanced reservations are highly recommended as this special tour will fill up quickly. Guests under 18 years of age must have parent or guardian permission to call. Theme park admission is not included and is required. Entertainment and Character appearances are subject to change. 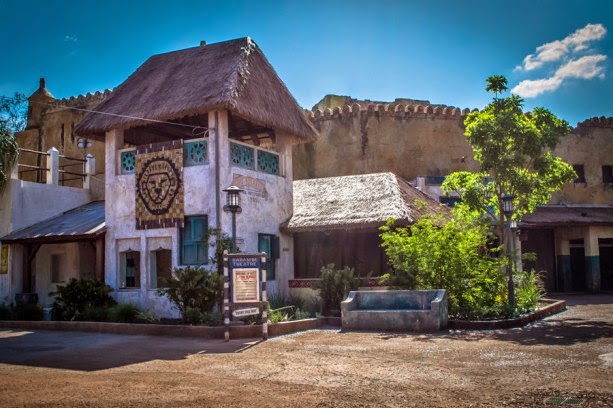 Disney has released a photo of the newly built Harambe Theatre at Disney's Animal Kingdom along with a look inside with the cast of 'Festival of the Lion King.'

The new theatre will be home to the hugely popular 'Festival of the Lion King' show that closed earlier this year in its original home at Camp Minnie-Mickey.

A precise opening date has not yet been released, but the show will be back entertaining guests in June 2014. The new theatre will also be home to a new show 'The Lion King – Concert in the Wild' during the summer 'Harambe Nights' event.