February 05, 2016
Ears the News is brought to you by our friends at WDWMagic.com 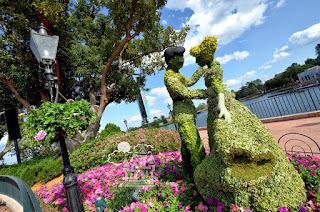 At La Isla Fresca you will find Jamaican Braised Beef with Pigeon-Pea Rice and Jerk-Spiced Grouper or Chicken with Mango Salsa. At the new Cider House, a Field Greens salad with greens harvested from The Land pavilion, heirloom apples, Stilton cheese and dried blueberries will pair well with a blueberry hard cider from Plant City, Florida.
A new Harmony Gardens musical playground with interactive drums and instruments will let children create music as they play on the playground.
Also new for 2016 is Fun Fresh Weekends that will bring specially themed weekends during the festival.

The full line-up for this year's festival is as follows.

·         On the south side of Spaceship Earth, Disney gardeners will paint the landscape with a Floral Sun garden and yellow “sunbursts” will sprout in a new Future World topiary garden featuring Minnie Mouse and Pluto.

·         The Ranger Mickey topiary garden in Future World will offer a guest selfie and family photo opportunity featuring a Spaceship Earth backdrop to celebrate the 100th anniversary of the National Parks Service launched in 1916 to conserve the country’s natural scenic treasures.

·         Anna and Elsa topiaries will travel to the Norway pavilion festival landscape following their 2015 debut along World Showcase Plaza in a scene from the blockbuster Oscar-winning animated film, “Frozen.” Nearly 100 topiary characters, including Snow White and the Seven Dwarfs, Lady and the Tramp, Simba and Peter Pan, will animate the Epcot landscape surrounded by themed gardens featuring herbs, peppers, orchids and more.

·         By night, twinkling lights will shine across festival gardens and topiaries.

·         The Garden Rocks concert series will present pop bands with music spanning four decades. This year’s lineup kicks off March 4-6 with The Orchestra starring former members of ELO and will also include new-to-the-festival acts like Bad Company.

·         A new edible flower garden by The Land pavilion will showcase petals with flavor.

·         The Butterflies on the Go garden will return with the story of the Monarch’s epic journey across the continent and featuring butterflies emerging from their chrysalises.

·         Each weekend at the Festival Center, guests can dig in for a complimentary hands-on Gardening Seminar experience and create a take-home souvenir or grab a seat to hear tips from experts on a broad range of topics. The center also offers signature festival merchandise, food and beverages.

·         Forty 8-to-9-foot-tall Disney-crafted “flower towers” and sweeping beds of multi-colored blooms will add to the floral splendor of the park’s landscape. At least 70,000 bedding plants will surround the Future World east and west lakes alone; on the water, more than 200 mini-gardens will be set afloat.

The performer line-up for the concert series is as follows.

Performances are at America Gardens Theatre at 5:30 PM, 6:45 PM, and 8:00 PM every Friday, Saturday and Sunday of the Festival and included with park admission.

The Boneyard playground at Disney's Animal Kingdom is scheduled for a refurbishment later this month. The closure begins on February 22 through to March 17.

The Bay Cove Pool at Disney's Bay Lake Tower is currently closed for refurbishment. The work is expected to be completed by March 18.

The Beach Pool Slide at Disney's Grand Floridian Resort will be closing for refurbishment later this month. Work begins on February 8, through to February 28.

The Orlando Sentinel is reporting that Fulton's Crabhouse will be closing in early April 2016 to begin a major remodel.

Documents filed with the state of Florida indicate that the closure will result in the layoff of 214 workers. The restaurant is expected to reopen later in the year.

The operating hours of the hugely popular 'Ohana Best Friends Breakfast at Disney's Polynesian Village Resort have been extended.

Breakfast now starts at 7:30 AM with seating through to midday. Prior to the extension, last seating was at 11:00 AM.

The adventure gets underway by picking up a Lion Guard Adventure Map at one of the park's merchandise locations to begin a park-wide search for the five Lion Guard characters: Kion, the fierce leader of the Lion Guard; Bunga, a brave and fearless honey badger; Fuli, a confident cheetah; Beshte, a friendly and good-natured hippo; and Ono, an intellectual egret.

The character statues are hidden throughout the park - Kion, the son of Simba, can be found in the Africa section of the park, Ono, the egret can be found near the Tree of Life, and Beshte, the hippo is hidden in Harambe.

Once all five characters are found, adventurers can head to Rafiki’s Planet Watch where cast members induct participants into the Lion Guard with a special pledge, fun activities, and a Lion Guard Button identifying them as honorary members. Rafiki will join the newest inductees for a photo opportunity.

The Lion Guard Adventure will be available through the end of March 2016.