Welcome to the latest version of Ears the News

Now that the news team from Kingdom Konsultant Travel has returned from their training at Universal Orlando, we proudly return you to your regularly scheduled news.

Opening in Spring 2017, the family raft ride will become the longest attraction at any Disney water park, clocking in at 2 minutes ride time.  Miss Fortune Falls brings to life the story of fictitious Captain Mary Oceaneer, a treasure-hunting heroine who got stranded at Typhoon Lagoon years ago by a rogue storm.

Once aboard their treasure rafts awaiting them at the ride’s entry point, Guests will embark on a journey through Captain Oceaneer’s past before plunging into a white-water adventure where Guests can see unique artifacts that Captain Mary Oceaneer collected on her many treasure hunts around the world.

The new ride is being built on unused land near to Crush 'n' Gusher.
'Art in August' will be taking place during the weekends at Disney Springs Marketplace

Taking place Thursday through Sunday each weekend (August 4 - 28 2016), the event will showcase local and Disney artists working in a variety of mediums, including painting, photography, crafts, and jewelry.

On the Marketplace promenade, there will be activities including chalk drawing and meet the artists behind the Disney magic. 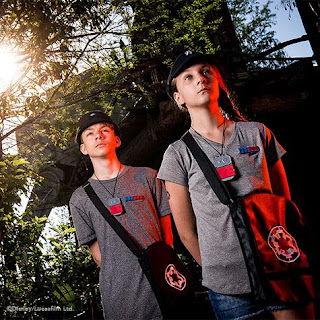 Available for guests staying at Walt Disney World Resort hotels, the adventure begins with the resort room decorated with an Imperial recruitment banner. The story goes that the Rebel Alliance has infiltrated the room, leaving gear and tech to help on a secret mission for the Rebellion. Through augmented reality on a smartphone, Ezra Bridger (from the TV series, Star Wars Rebels) guides the players on an undercover mission. Slipping on the included Imperial Security Officer disguise, they'll head to Star Tours-The Adventures Continue attraction where hidden data they're carrying will be transmitted in hyperspace.

Once the mission's completed, they'll be directed to their resort room to unlock a mysterious box holding a rebel medal of honor, like the one in the film Star Wars: A New Hope.

Theme park tickets are required and not included, as is an iPhone or Android device.

The Magic Kingdom's bag check area has become increasingly congested in recent times as security checks are becoming more thorough and time consuming.  For guests arriving from resort hotels by bus, or from the TTC by ferry boat, security screening now takes place on the right-hand side of the entrance - an area previously used for exiting only.  This area has been used on occasion in the past, but this summer it has been in constant use, with guests no longer being redirected to walk down the ramp and towards the original main screening area.  For guests arriving via monorail or resort launch, security screening continues to take place at the original main entrance area.  Despite having two screening areas, you should still expect some significant waits getting into the park if arriving at peak time near to opening.


Starting August 7 and taking place daily through to August 31 2016, the experience will be available exclusively to guests who have purchased Memory Maker, Memory Maker One Day package or a Disney Annual Pass with complimentary Disney PhotoPass entitlements (Disney Platinum Plus Pass, Disney Platinum Pass, Disney Gold Pass or Disney Premier Passport). Only one person in each party will need to hold the entitlement to enter, verified by a MagicBand or ticket scan.

Appearing in her formal dress, Belle will appear intermittently from 11:00 AM to 5:40 PM. Belle will also continue to appear at Enchanted Tales with Belle in Fantasyland.

Heritage House in Liberty Square has served a number of different roles since closing as a store a few years ago, including a MyMagic+ service center, and most recently as a meet and greet venue with Tiana.

Celebrating the opening of the new Bibbidi Bobbidi Boutique at Disney Springs in the Marketplace, Disney will soon begin offering a 10% discount for a limited time.

Themed as a country parlor, the new Bibbidi Bobbidi Boutique location offers an expanded salon with interactive features, and a new photo room to capture the transformations.

Four new locations have just been added to the Tables in Wonderland dining discount program, including the highly rated Tiffins Restaurant at Disney's Animal Kingdom

The four new locations are:

Disney's Night of Joy makes the move from the Magic Kingdom to ESPN Wide World of Sports this year, and Disney has now released for the full performer lineup for both nights.

This year there are eighteen Contemporary Christian Music artists performing in three different venues at the Wide World of Sports complex.

New for this year is "Fields of Joy" sporting challenges, including soccer, football and baseball. "FanFest" at the Jostens Center will include a fun, interactive area that includes video games, 60 second challenges, Imagination Playground and oversized versions of popular games such as foosball, connect four and chess. On Saturday night only, FanFest will include a special opportunity for guests to participate in multiple question and answers sessions with some of the top artists appearing at Night of Joy this weekend.

Mickey Mouse and Minnie Mouse, along with some of their friends, will be meeting and greeting 5:00 PM to 11:00 PM on both nights.

Disney has officially confirmed that the Main Street Electrical Parade will be leaving the Magic Kingdom and returning to Disneyland, with its final performance to be October 9 2016. It will debut in Disneyland in early 2017.

Also announced, Paint the Night will continue to perform during the holidays at Disneyland, meaning it will not be heading to Walt Disney World, at least in the short term.

Elena, who appears in the Disney Channel series “Elena of Avalor,” will be appearing on the Cinderella Castle Stage for a limited time in a brief show - "The Royal Welcome of Princess Elena of Avalor."

Check out the video below provided by WDWMagic for the very first appearance of Elena at Walt Disney World.


"The Jungle Book: Alive with Magic" will have its final performance on September 5 2016


The limited time show, which opened on Memorial Day Weekend, was brought in on short notice in place of the delayed Rivers of Light show.

Work continues on developing that show, with testing underway daily, and more testing to take place once the Jungle Book leaves the river.

The other nighttime activities at Disney's Animal Kingdom are unaffected, with the Kilimanjaro Night Safaris, Haramabe Parti, Discovery Island Carnivale and the Tree of Life Awakenings continuing.

Operating hours are likely to be shorter than the 11pm closings of recent, at least until Rivers of Lights debuts, which is expected to be later this year.