Minnie Van Service to the airport can be booked via Concierge Cast Members once checked in at the
resort, up to one day before departure. The cost is $150, and is one way only, from the Disney hotel to Orlando International Airport. Airport Minnie Van Service can carry 6 passengers and up to 3 car seats for guests under the age of 6.

The service is available for airline flight departures from 9:00 AM to midnight, and Disney recommends using the Resort Airline Check-In Service alongside Minnie Van Service.

The Magic Kingdom's nighttime firework spectacular 'Happily Ever After' has moved to a new time slot for the first quarter of this year.

Beginning January 28 through to March 10, 2018, 'Happily Ever After' will now take place at the rather unusual start time of 7:55 PM. The previously published showtime was at 8:00 PM.

Showtimes for two of the nighttime shows at Disney's Hollywood Studios are changing from previously published times for the first quarter of 2018.

Star Wars A Galactic Spectacular will now begin at 8:15 PM, from its previous 8pm start time. With Fantasmic! beginning at 7:00 PM, this should give guests time to see both shows.

The Star Wars: Galactic Nights ticketed event will return to Disney's Hollywood Studios on May 27 2018.

Tickets are not yet on sale, but expect pricing and the offering to be similar to previous events.

Celebrating the 65th anniversary of the Peter Pan movie, Captain Hook and Mr Smee will appearing for a limited time at the Magic Kingdom.

Beginning February 4 through to February 10, 2018, the duo will appear for meet and greets in Fantasyland intermittently from 9:00 AM to 6:15 PM, with PhotoPass on-hand to capture the moment.

PhotoPass will also be offering special Magic Shots, including a shot with Peter Pan's shadow, an the addition of your very own fairy wings.

Disney has now made its My Disney Experience Mobile Order available to guests using the Disney Dining Plan.

Mobile Order allows you to pay for meals on-the-go within the My Disney Experience app, bypassing the queue to order at the restaurant. Using the app, you can select menu items, customize an order and pre-pay for a meal. Arriving at the restaurant, you tap an “I’m here” button in the app, which will notify the kitchen to prepare the meal. When ready, you'll be alerted through the app to pick up the meal at a designated window. Until today, Mobile Order was only accepted Credit Card payments.

Dockside Margaritas in the Marketplace at Disney Springs is now serving a selection of food served up by the nearby Fantasy Fare Food Truck.

Although the new menu can be ordered from Dockside Margaritas, you can still walk up to the Fantasy Fare Food Truck and order the same items.

The Atlanta Braves have announced they will extend their Spring Training agreement with the ESPN Wide World of Sports through April 2019.

The Braves will play their final 2019 Spring Training game in the new ballpark in North Port, Sarasota County.

The team was expected to leave the Walt Disney World complex in 2017, having trained at the Wide World of Sports since 1998.

“We are thankful for our good friends at Walt Disney World Resort and are excited for this extension,” said John Schuerholz, Atlanta Braves Vice Chairman Emeritus. “We also appreciate the foresight and thoughtfulness of our partners in North Port, Sarasota County and West Villages in recognizing such an extension will be of benefit as we continue to make progress on our new facility. When complete, our new, state-of-the-art facility will secure our long-term goal of creating a perfectly positioned and operational Spring Training facility for the next 30 years.”

Beginning February 4, José and Panchito will join in the Discovery Island Carnivale at Disney's Animal Kingdom.

The dance party features music from the Viva Gaia Street Band and takes place nightly through May 5, 2018.

Enzo's Hideaway at Disney Springs will begin its 'Smuggler's Series' this month with a Classic Malt Whisky Tasting event.

Taking place on February 8, 2018 from 5pm to 7pm, guests will enjoy a tasting of six prestigious Diageo Classic Malts Whiskies paired with a meat and cheese plate.

The event will be hosted by Ewan Morgan, the National Director of Diageo's Reserve Program, a third generation 'whisky man' and one of the most knowledgeable whisky resources in the industry. He will use Classic Malts Tasting Mats to give us a tour of six famous Scottish distilleries. Added bonus: a very rare and unique whisky has been added as a 7th tasting, quite possibly a spirit from Enzo’s reserves that few people have ever seen!

This first event can only be attended by winning a ticket - enter now! Must be 21 years or older to enter. Contest winners will be announced and contacted via email February 5. Travel expenses to and from Enzo’s Hideaway for this tasting are not included.

Super Heroes take over the America Gardens Theatre at Epcot this summer with a Guardians of the Galaxy Dance Party.

Favorite Disney•Pixar super heroes will take over Tomorrowland – celebrating all things super from May 25, 2018. 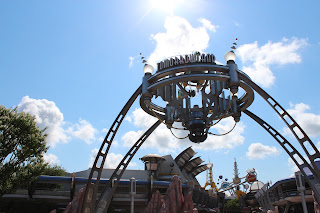 Guests will party with Mr. Incredible, Elastigirl, and Frozone from Disney•Pixar's 'The Incredibles' and upcoming 'Incredibles 2.'

For the first time ever, guests will get to see Edna Mode, the greatest superhero costume designer.

The super heroes will interact with guests throughout the land. And the festivities culminate with a 'SUPER' dance party on the Rocket Tower Stage.

Disney has revealed the name of the new show at Disney's Animal Kingdom to replace Flights of Wonder.

'Adventurers Meet UP! A Great Bird Adventure' will offer guests the chance to see Senior Wilderness Explorer Russell and his furry friend Dug as they discover species of birds from around the world in their newest adventure at the Caravan Theater in Anandapur village. There will be “UP” close encounters each day with amazing winged creatures!