In The Living Room, there’s Space Ranger Training where kids learn what it takes to become a Jr. Space Ranger of Star Command, including how to master the call of the Space Ranger, “To infinity and beyond!”

Then, Woody and Jessie will show them the ropes of the Wild West during Woody’s Roundup – complete with a sing along.

Around the corner, toys of all kinds are waiting to play in Bonnie’s Play Room.

Radiator Springs Racetrack is where youngsters can build their own race cars and send them down a soapbox derby racetrack in the Piston Cup Derby Races.

The evening builds to an Incredibles Super Dance Party with Mr. Incredible and Mrs. Incredible.

Doors open for registration at 5:00 PM nightly. Children must be toilet-trained. Activities and entertainment are subject to change.

The Pixar Play Zone experience costs $65 plus tax per child. Availability is limited and reservations are strongly recommended, by calling 407-824- KIDS (5437).


There is a new limited-time photo opportunity at the Twilight Zone Tower of Terror in Disney's Hollywood Studios.

For $19.95, you can get an 8"x10" lenticular print of your party in a "spirited form." This isn't an on-ride photo, and the picture is taken near to the photo desk at the exit of the ride.

Lenticular prints produce printed images with an illusion of depth, or the ability to change or move as the image is viewed from different angles.

The pilot is expected to last for the next 3 months.

FastPass+ is now available for those guests staying at a Walt Disney World Resort hotel, and are within the 60 day prior to check-in window. For example, if you have a 14 day stay arriving on June 16, you would be eligible to make a FastPass+ for Toy Story Land on June 30.

Morning Extra Magic Hours for Walt Disney World Resort guests will be held everyday from July 1 to August 31 2018, 7am to 8am.

Evening Extra Magic Hours will be held on Fridays during July and August, from 10:30pm to 12:30am.

EMH will include all of Toy Story Land and other attractions throughout the park.


Construction walls are now up in DinoLand U.S.A. for Donald's Dino Bash! at Disney's Animal Kingdom.

Donald's Dino-Bash!, which opens Memorial Day Weekend, is a “dino-tastic” celebration where Donald Duck takes over Dinoland U.S.A. The world’s most famous duck is celebrating his recent discovery that ducks are descendants of dinosaurs. He’s brought along feathered friends Scrooge McDuck and Launchpad McQuack, plus other Disney characters to meet guests. In addition to bringing his own decorating touch to the land, Donald puts on a nightly dance party where everyone can shake their tail feathers.

Disney has announced the upcoming launch of a new "Play Disney Parks" app for both Walt Disney World Resort and DisneyLand Resort.

Coming this summer on iOS and Android, guests can play in the parks using this soon-to-launch mobile app to access 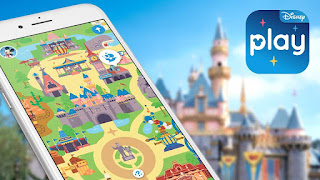 exclusive experiences at both locations through activities that interact with the surrounding environment.

With the touch of a button, wait time turns into play time with family and friends at certain locations. And the more you explore in Disney parks, the more there is to discover on the app.

Fairfax Fare at Disney's Hollywood Studios will be serving breakfast as part of a limited test next week.

Menu items will include:
The kiosk will continue to serve lunch as normal from 11:30 AM.