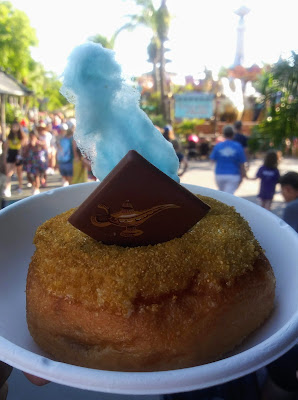 Hey there, hi there, ho there, Disney Foodies!

Who's ready to check out some new sweets and treats from the Magic Kingdom? The fam and I hit up the park the other night to enjoy some rides and fun before summer officially kicks off and school is out. (Yes, our kids last day of school is THIS WEEK!) While we were there, we of course, had to try out some of the newer items that are being served up in the parks. What kind of Disney fans would we be if we didn't? I'm happy to share that we experienced some tasty new items and would love to share them with you now. Let's check 'em out! 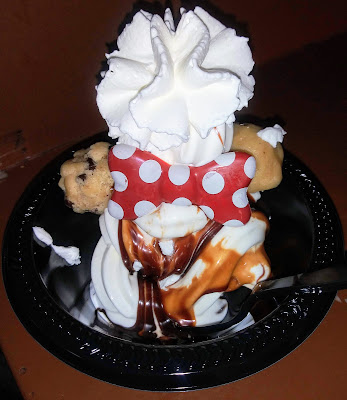 It's super cute and the chocolate chip cookie dough is a unique twist on a basic sundae. The edible cookie dough has been popping up all over property, including at the value resort's food courts. It's an egg-free version of cookie dough, made with treated flour, so no pesky salmonella for enjoying this dough! The consistency is a bit gritty, but that's really the only noticeable difference between this and regular cookie dough.

As for the sundae, it was good. Not great, but good. The ice cream would have melted quickly anyway, but with the hot fudge on it, it didn't have a prayer. We had ice cream soup in about two minutes. It didn't stop the kids from eating/drinking it. Good one for ice cream lovers, but not something I'll get again.

Also from Storybook Treats, this refreshing ice cream cone is super cute and honors the "lost princess" herself, Rapunzel. 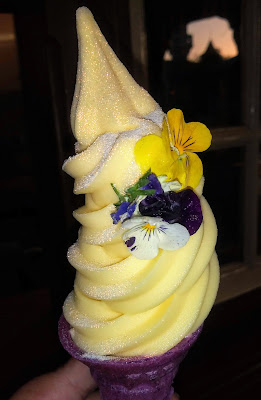 The twisty yellow soft serve resembles her long braid, complete with flowers to decorate it, and the purple cone is reminiscent of her dress. It even has some sparkle to make it more 'princess-y'. The cone is really just a regular, dyed cake cone but the ice cream part is something special. Meet Dole Whip's new cousin, Lemon Whip. It's a light, tangy, refreshing lemon soft serve that's more like sherbet than ice cream. SO YUMMY! Yes, the flowers are edible but I do not care for them. To me, they taste like... well, plants. The sparkly topping I could have done without too. It looked pretty, but it didn't have any sweetness to it so it was more like flour had been dusted on top. I would totally get this one again, but next time I'll ask for no glitter and I'll toss the flowers.

Right next door in Fantasyland, The Friar's Nook is celebrating the Big Cheese with this fun cake pop. It comes in a clear tube, lined with this adorable Mickey paper. The pop is advertised as a confetti cake with buttercream. Now, as you can see from the side of the tube, it was not packed very tightly, and there was some empty space inside the tube, lowering its value to me. The "cake" was more like cake batter or cookie dough. It was very, very moist, and in fact, mushy. The buttercream was very tasty and the sprinkle topping was super fun. 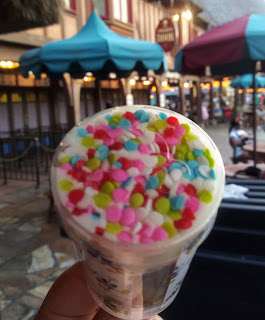 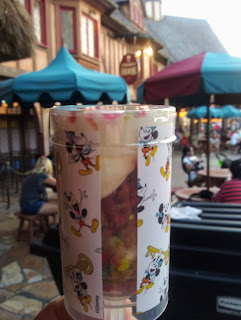 I also liked that the hole at the top was Mickey-shaped and made the pop come out in a Mickey shape! 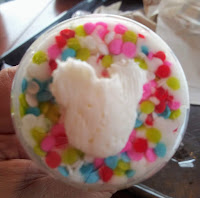 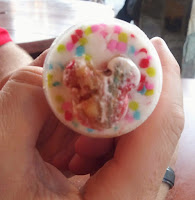 Overall, though it had a nice vanilla flavor and was a fun treat, I would not recommend this one. For $5 the pop was small and was basically a tube of frosting. Not that a tube of frosting is a bad thing... just not worth price.

Casey's Corner on Main Street USA is also celebrating Mickey with a tasty treat: a buttercream-topped brownie! This brownie-in-a-cup is topped with a generous layer of vanilla buttercream and a white chocolate disc with the main man himself on it. 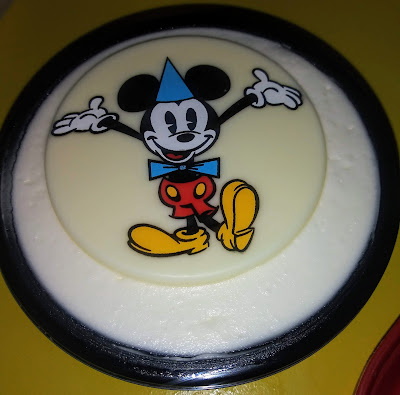 Though not terribly exciting, it was a nice, moist brownie and my daughter (a self-proclaimed brownie connoisseur) loved it.

In honor of the arrival of Disney's live-action "Aladdin" into theaters, the Sunshine Tree Terrace in Adventureland is selling this amazing confection. The base is a fried, yeast donut, coated in gold sugar, and topped with a chocolate disc, printed with a magic lamp, and a tuft of blue cotton candy coming out the top of it. 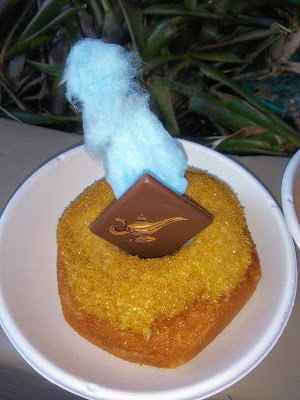 Now, the picture that advertises the donut at Sunshine Tree Terrace shows a considerably larger amount of cotton candy coming from the top, but it worked out fine, since the already extreme heat and humidity of Central Florida made the cotton candy melt and evaporate into a sticky mess almost immediately. More cotton candy would have just meant more mess.

The donut itself was fresh and more like a beignet or fried dough than a yeast donut. And bonus: it was egg-free! We were psyched to hear that, since my little guy is allergic to eggs, so he was able to enjoy this treat with us. The gold sugar didn't make the donut overly sweet, though it was kind of a weird texture, since it was large grains of sanding sugar. Kind of crunchy for a donut. The chocolate square was rich, delicious milk chocolate. The cotton candy was Disney's standard blue raspberry cotton candy.

Overall, we really liked this one. The price tag was a little high, at over $5, but since we liked it a lot, it was worth it.

Which one do YOU think sounds best? Need help planning a trip to get yourself down here to try them out? Contact the agents at Kingdom Konsultant Travel and they will help you plan the trip of your foodie dreams!

Until next time, Disney Friends, have a magical week!