May 15, 2012
In the weeks leading up to our surprise vacation, my son was always bringing up Disney World and what he would be allowed to ride the next time we went.   I always told him "everything" because we wouldn't be going until our other little one was 3.   He said, "Next time we go, I will definitely get on Rock 'n' Roller coaster!"   Needless to say, he had no clue it would be just a couple weeks away, and I didn't know if I should hold him to it.   I always hated when my parents forced me to get on rides that I wasn't comfortable with as a kid, so I felt like I couldn't force him if he backed out at the last minute. 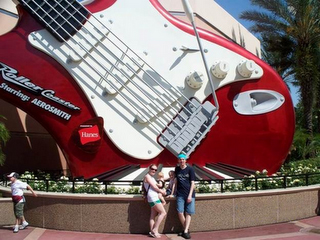 A couple of days into our trip, we arrived at Hollywood Studios, and he knew it was decision time to go on Rock ‘n’ Rollercoaster or not.   As the kids and I waited for my husband and my mother-in-law to get off of Tower of Terror, he started asking me questions.   I tried reassuring him that he would have fun, and if he didn't like it, he didn't have to ride it again. So after receiving our Child Swap ticket, we headed towards the big guitar.   He held my hand the whole way.   As we started up the ramp, he was starting to doubt if he wanted to go or not. I talked up the ride and how exciting it was and explained the only thing that was scary was the take-off, but it was over in 2.8 seconds.   Hitting 60 mph that quick  was a tad scary, but after that he would have a blast, right?
I myself was nervous--who isn't?   This ride’s G-force on your body is WICKED!   As we were walking through the queue, I explained everything that would happen.   We would enter a room that looked like we were watching Aerosmith and their manager having a discussion.   We then would be invited into their stretch limo to get down to the Civic Center to see them perform live!   After this room, we would then enter the line in which you look like you are in an alley with chain-link fences, and there in front of you, pulls up a stretch limo waiting for you get in to head to the show!
It was finally time to board the stretch limo.   We got the last seats.   I crossed over the seats, and he sat down next to me, while my hubby sat behind us.   An 11 year old girl was next to him, and this was her 14th time THAT DAY.  So before we could even blink, we were sitting at the stop light about to take off.   *Is it bad that while I am typing this, I am reliving it and actually getting nervous?*  He said "OK, Mommy, I don't think I want to do this anymore."   I told him it was too late, but we would have fun.   I warned him every second what was about to happen.   They were going to start pumping music into the headrest, and it would start counting down.  Then the second the light would turn green, and we would shoot off.   I was so nervous for him yet so proud that he was going to do this without a fight.   He grabbed my hand; the lights started changing, and Steven Tyler started screaming in my ear...
3... 2... 1---BOOOOMMM!   We took off and hit the first inversion.  I asked him if he was okay, and if he was having fun.   He said, "I didn't like that!"  I kept telling him to look at the lights and to look for the doughnut that we would go through.  Besides the fabulous music and high speeds, I love seeing all the neon lights and road signs.  He wasn’t that impressed.  The whole time I was trying to talk up the ride and say how fun it is.  He made a couple of statements about the cool lights, but after a couple of cork screws he had enough and asked me if it was almost over.  Just at that moment--the brakes took over, and we were done.  We came to a stop, and the restraints popped open.
<><> <><>
As we stood up, I ask him if he liked it.  He just said "No."   No explanation, just "No."   I kept telling him how proud I was of him!   I couldn't believe my little baby, only 6 years old, WANTED to attempt this ride.   NO hesitation, NO fighting, NOTHING.   He told me he wouldn't get on it again until he was older.   I told him I was just so proud of him for even trying it.   We stopped in the gift shop and looked at the picture.   I immediately ordered a picture and bought a pin to commemorate the occasion.


So after all of this, if someone were to ask me “Is this a ride that is ok for a kid?” I would have to say, if they are okay with doing it, then yes.   If they are kind of hesitant, I would explain what the ride is like and go from there.   If they try it and hate it, then you know that they won't try it again until the next trip.   Never force your kid to ride a ride that they are not comfortable with.  That is what Child Swap is for!


In my eyes, this is one of the best rides at Walt Disney World... up there in my top 5 favorites!!   What are your thoughts?   Should younger kids--as long as they meet height restrictions--be able to ride this kind of ride?   I say, LET THEM ENJOY!