Disney’s Live Entertainment - AKA - Confessions of a Disney Groupie


As anyone who knows me can tell you, I am into music.  It started when I was in grade school.  My Dad was into music, so I received a great appreciation for all types from Big Band on up to present day.

Disney has a lot of great music in the attractions, the parades, and other big events.  It surrounds you at the resorts and theme parks, setting the mood and theme for where you are.  Something that many people overlook or don’t even know about is the Live Entertainment available at each park and in some of the resorts.  These are great attractions in and of themselves, but unlike a regular attraction, it isn’t in a building or on a map and sometimes the locations change depending on what else is going on.   Make sure you grab a times guide as you enter the park as this will have most of the entertainment listed along with the locations and show times for the day.  If you don’t see a particular act, check with Guest Services in that park, and they will be able to give you information on any acts performing that aren’t listed in your times guide.

My exposure to this started a number of years ago when I kept hearing about this great band in EPCOT - Off Kilter.  I never seemed to run across them, so I went into Guest Services and asked.  The days that I was usually in EPCOT were, of course, the days they had off.  I made it a point to plan to be there on one of their show days and incredible didn’t begin to cover it!  The music is Celtic in style, with a bit of a twist on every song.  There are your traditional reels but in between if you listen carefully you can hear riffs from the band Rush.  "Danny Boy" is done with a rock beat, and "Amazing Grace" is usually preceded with a quick bit from “Stairway to Heaven” and is played with a bit of a jazzy blues feel to it.  Definitely not your Dad’s traditional Irish band, that’s for sure.

Over the years, I have become friendly with most of the gentlemen in the band, and a lot of the other very talented people who work with them.  Many of the people who work with the band to cover the regular members' days off also work elsewhere within Walt Disney World.  My musical world, as far as Disney went, was about to open up a .  One of these talented individuals, who covered for the normal guitar player in Off Kilter, was working with a new band that had just started in Disney’s Hollywood Studios park called “Mulch, Sweat & Shears” and recommended that we go over and see them.  Another member of Off Kilter had mentioned this same band to one of the girls in our group.  I didn’t make it over there to catch them until March of 2005, and I was HOOKED.  Their blend of comedy and great music is very addictive.  The sets usually consist of rock & roll covers from the last few decades and routinely get everyone up and dancing to their great playing and vocals. Audience participation is encouraged and definitely a fun part of the show. 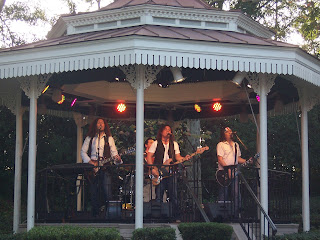 Another very talented gentleman, who substituted for the regular bass player in Mulch, Sweat & Shears  for a while, recently received his own band in the United Kingdom Pavilion as part of the British Revolution.  Of course, I just had to get over there to see them, and another must do was added to the list.  Are we starting to see a pattern here?

Those are always my must do’s.  I have several others that I do try to catch as often as I can such as Mariachi Cobre, Mo’Rockin’, Oktoberfest Musikanten and Voices of Liberty. Any special concerts such as the Eat to the Beat Concert Series and the Flower Power Concert Series in EPCOT with special guest performances by artists who are fairly well known are also on my list.  Admission to these concert events are included with your admission to the park; however, some of the more popular acts will fill up the America Gardens Theatre quickly so you will want to get there early.  The Dapper Dans and Main Street Philharmonic always get me singing and dancing over at the .  The Notorious Banjo Brothers and Bob are also great over in Frontierland.

I almost never manage to fit all of them into one trip in between everything else, but I always know that I will be surrounded with the happiness and joy that great music can bring to people while I am at Disney, regardless of the variety I happen to be listening to.  So whether you are dancing with the parades, marveling at the scores to the fireworks, being amazed at the talent of the live entertainment, or enjoying the music of the stage shows, what musical memory will you and your family make this year?   Let me know what your favorite is!  I look forward to hearing from you.  Until then, Rock on!
Marie