Perry the Platypus Needs Your Help! 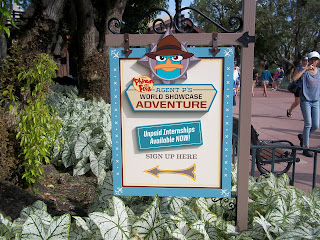 Perry the Platypus’s alter ego Agent P is looking for volunteers for unpaid internships to help him foil Dr. Doofenshmirtz who is up to no good while he is vacationing thru seven countries. Perry is nearby but is locked up in his carrier with his step brothers Phineas and Ferb, and needs assistance until he can get loose.


This is the premise of the new Agent P’s World Showcase Adventure located at Epcot which replaces the former kid’s adventure, Kim Possible.

Volunteers can sign up at 4 kiosks located at the , the International Gateway Bridge, Norway and . The mission is free and all you need to join the ranks is present a Key to the World Card. You will then be handed a FONE (Field Operatives Notification Equipment) which is a small flip phone with a screen.

New recruits will get to choose their agent name…my son chose Agent N for Nicholas. You will also be assigned a country for your mission and a time to report for duty!

There are currently adventures available in 7 of the 11 countries in World Showcase with more to follow in the coming months. The cast member at the sign up location will let you know what countries are available for missions. The country of your mission will be determined by availability. During peak mission times, you may only be able to choose from 1 or 2 countries. Agents assignments are done to keep things evenly spread out so you don’t have all the agents in one country at one time. 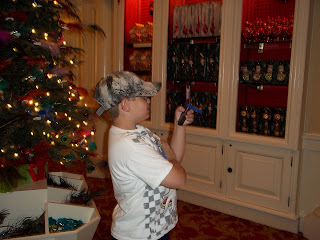 We trailed Dr. Doofenshmirtz thru first. Clues are given on your FONE screen which will either show you a picture of exactly where to go and stand, or it will give you verbal instructions on where to go. In the Christmas shop, a nutcracker revealed 4 letters that had to be keyed into the FONE for the next clue and a stop by the outside miniature train village center square revealed another. We were hot on his tail through the crystal shop, the teddy bear shop and then located a clue painted on a building. When we finally caught up with Dr. Doofenshmirtz, we were the least of his worries as a lovely maiden in a clock tower was chasing him with a broom. accomplished!

Later in the day we did a mission in that included having a hidden camera taking your picture and sending it to the FONE and finding a cast member by Maelstrom to say a secret code to, and then he would hand you a card with a code for your next clue.

Agent P is a lot of fun for both kids and adults. It’s free and a nice break for the kids who might not appreciate World Showcase like grownups do. Since there are 7 different countries and the missions usually take 30 minutes or less, parents don’t need to worry about a mission consuming a large portion of the day.  You can even include doing missions as part of your plan for the day!