Whipping it Up in Adventureland! 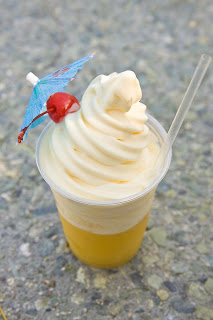 Everyone has a favorite snack when they go on a Disney vacation and mine is the Dole Whip.  Well, that’s probably me and a million other people, too!  In Magic Kingdom’s Adventureland at Walt Disney World, you’ll find a small store front called Aloha Isle.  Chances are, you may have passed by here and wondered why so many people were standing in line knowing there is no ride there.  This is so much better than a ride!  It’s one of several locations that you can get this soft serve frozen pineapple dessert along with Captain Cook’s at the Polynesian Resort, the Tiki Juice Bar in Adventureland in Disneyland and the Dole Plantation in Hawaii.


If you find yourself in Adventureland, I’d highly recommend treating yourself to one,  whether it’s in a cup by itself or as a float in pineapple juice.  Either way, it is absolutely delicious!  They also have vanilla if you don’t care for pineapple.  After you try this wonderful confection, you’ll be asking yourself "How did I miss this place? Are you sure this is non-dairy and not ice cream?"  Dole Whips are considered a snack item on the Disney Dining Plan.
What is your favorite way to enjoy a Dole Whip?