April 17, 2020
Disney Cruise Line offers a truly out-of-this-galaxy themed cruise that's a must do for Star Wars fans! Star Wars Day at Sea is available on select 7-Night Caribbean cruises sailing from Port Canaveral and combines the power of the Force with a little Disney magic.

I recently sailed on the Disney Fantasy and we were lucky enough to experience our first Star Wars Day at Sea sailing. We are pretty big Star Wars fans so we were very excited for everything Disney Cruise Line had in store for us on this specially themed cruise. In preparation for this cruise, we had our 3-year old son start watching the Star Wars movies and I'm happy to report that he's also a big fan now!

When we first boarded the ship, I immediately noticed the additional Star Wars Day at Sea themed photo opportunities in the atrium. There was a large Star Wars Day at Sea backdrop and there was also Han Solo frozen in carbonite a la The Empire Strikes Back. It was nice that these were up all week so you had plenty of opportunities to grab a picture.

The actual Star Wars Day at Sea was scheduled for the last day at sea but technically the event started the night before. There wasn't anything officially posted in the daily Navigator but our servers at dinner filled us in that Darth Vader may be boarding the ship around 10:15pm that evening. We gathered in the atrium and enjoyed some live music from Firelites while we waited for the Sith Lord to arrive. Right on time at 10:15pm, the lights in the atrium turned red and that classic Imperial March began to play. Darth Vader entered on Deck 4 along with a few Stormtroopers and they took over the ship. I recommend grabbing a spot in the atrium either on Deck 4 or towards the elevators on Deck 3 for the best view. 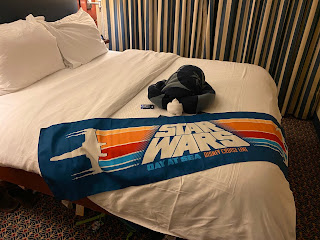 When we returned to our room after dinner, we were greeted by a towel animal (as usual) but there was also a Star Wars Day at Sea banner. It was a nice touch to get us excited for the special day at sea. And, we got to keep the banner as a souvenir!

In my opinion, one of the coolest parts of the day was the characters that just roamed the ship. We saw Jawas and Boba Fett walking around on Deck 3. The Jawas would actually trade items with guests. We didn't participate but it looked fun! There were also some characters from Star Wars Rebels we saw wandering the atrium area. We don't watch that show so I wasn't familiar with the characters but I later found out they were Sabine, Ezra and Ahsoka Tano.

My favorite run-in was when we were lounging by the 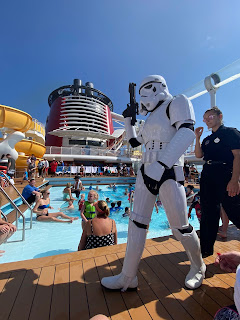 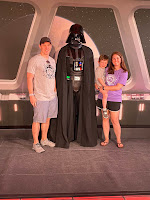 We scheduled our meet and greets bright and early, with Darth Vader being our first of the day. Our son was SO excited! Darth Vader is his absolute favorite! (Shh, don't tell him he's the bad guy! Although, spoiler alert, he redeems himself in the end so maybe he is good?!) Any way, we were very excited to meet Darth in The Tube. They had a neat backdrop that made it look like you were inside the Death Star.
C-3PO and R2-D2 were naturally available for meet and greets together and the backdrop was the Forest Moon of Endor. Chewbacca's meet and greet line was the longest one we saw that morning but I'm not sure if that's because it was a little later in the morning or he's just that popular. The backdrop for Chewy was fittingly inside the Millennium Falcon. There were also character experiences at the Disney's Oceaneer Club which looked like a lot of fun for the kids! 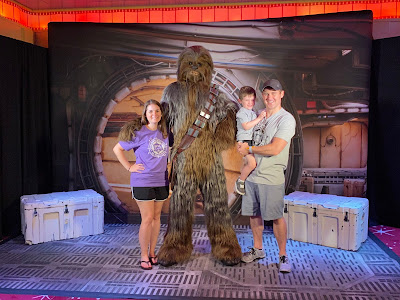 The day was filled with galactic activities! There were so many activities that it was impossible for us to do them all with a 3-year old. What I really liked was that the majority of these activities were available multiple times throughout the day. So if one time didn't work for you, you had some other chances to experience them later in the day. 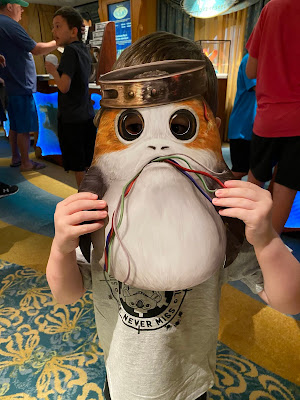 My favorite activity was the Porgs Onboard Scavenger Hunt. Porgs had been wreaking havoc on the ship and Chewbacca needed our help to track them all down! We were able to pick up an adorable Porg mask at the Port Adventures desk that also had clues as to where to find the Porgs onboard. I'm not going to lie... these things were hard to find! Once we found the first one, it got easier since we knew what we were looking for. Later in the evening we were able to meet in D Lounge for a special photo opportunity with everyone else who did the scavenger hunt and some special guests. Spoiler alert...it was Rey and Chewbacca! 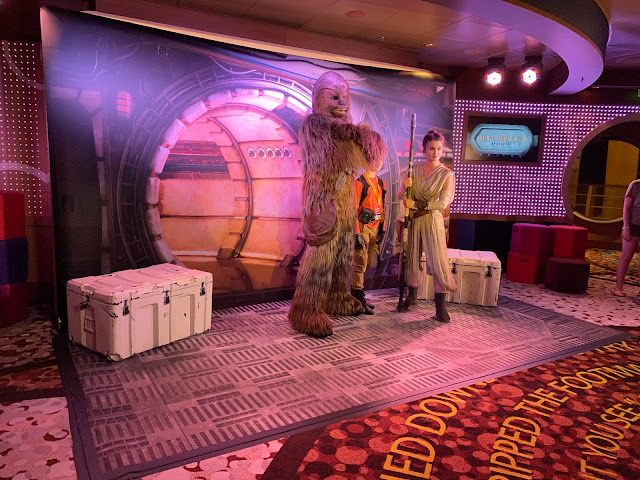 In addition to the scavenger hunt, we also attended the Costume Celebration, BB-8 Races and watched Star Wars at Lightspeed. The Star Wars at Lightspeed was actually pretty funny. Cast Members try to retell the original trilogy of films in 20 minutes. There were only 3 Cast Members doing the reenactments so it was very entertaining watching them run around and play various roles in the films.

Some of the activities we didn't get to included Star Wars Drawing Academy, Family Trivia, and Star Wars 101. I wish there would have been time for us to do these but it's just too hard to get a 3-year old out of the pool sometime!

There was a TON of specialty merchandise for Star Wars Day at Sea. There were shirts, toys, mugs, Christmas ornaments, you name it. Outside the Buena Vista Theatre and Walt Disney Theatre they had awesomely cute BB-8 sippers in addition to other character beverage containers available for purchase. We also saw the very popular, however impractical, Millennium Falcon popcorn buckets outside the theatres. 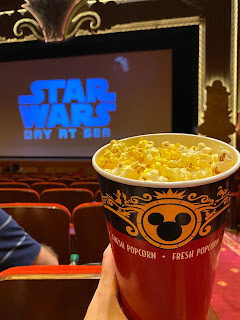 Throughout the cruise, they showed movies from the Star Wars universe in the Buena Vista Theatre including Rogue One: A Star Wars Story and The Mandalorian, the new hit Disney+ series. So, if you've been living under a rock for the last 40+ years and have never seen a Star Wars movie, this was your chance to catch up on the franchise before the big Day at Sea! Then on the actual Day at Sea, there was a movie marathon from morning until night.


The Walt Disney Theatre also showed the newest and final film of the Skywalker Saga, Star Wars: The Rise of Skywalker. Just like the nightly stage shows in the Walt Disney Theatre, there were two opportunities to watch the movie so you could coordinate with your dinner seating in the main dining rooms. 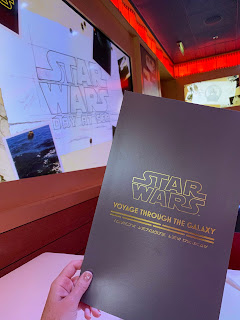 The Star Wars theme continued at dinner in the main dining rooms. There was a Star Wars inspired menu that included Sand People Salad, Bantha Steak Empanadas, Lord Vader's Nerf Steak and Qui-Gon's Crisp Chicken, to name a few. It was a really fun menu! The dessert menu was just as fun with Calrissian Velvet Cake and Han Solo's Frozen Carbonite Sundae. I love how Disney really pays attention to every detail. 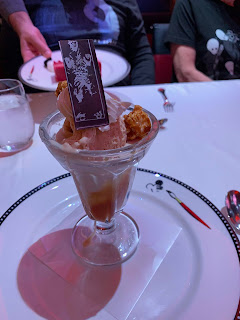 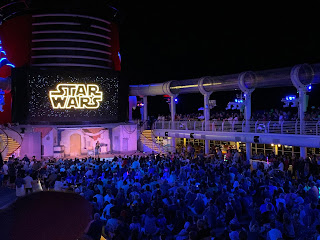 To end the evening, there was the Summon the Force Show up on the Deck 11 stage followed by Fireworks at Sea. The show was a compilation of clips from the movies as well as characters on stage. It felt like a really nice tribute to the Star Wars saga. After the show, it was time for fireworks! I mean, does it get any better than fireworks set to a John Williams' Star Wars score?! I don't think so.

Here are some more pictures from our day: 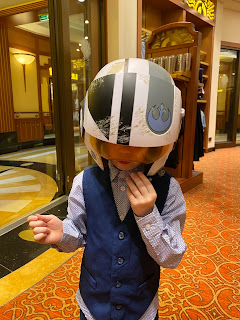 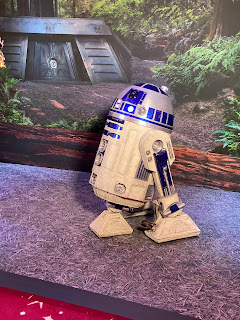 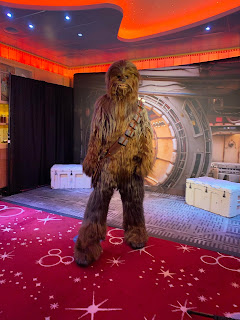 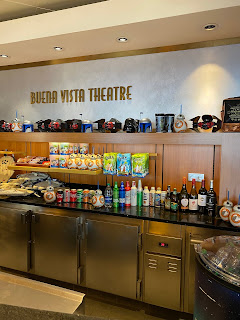 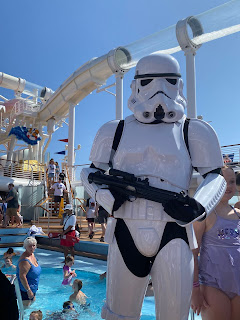 We had such an amazing time on our Star Wars Day at Sea! I highly recommend booking one of these select sailings if you can. Contact your Kingdom Konsultant Agent to find out more and remember... 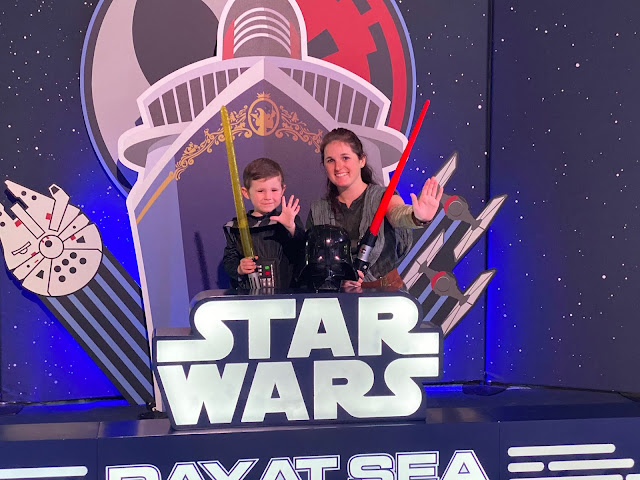 May the Force be with you!

Ashley Lehman
Ashley is a Gold Castaway Club Member and has sailed on all of the Disney Cruise Line ships. You can email Ashley at ashley@kingdomkonsultant.com.