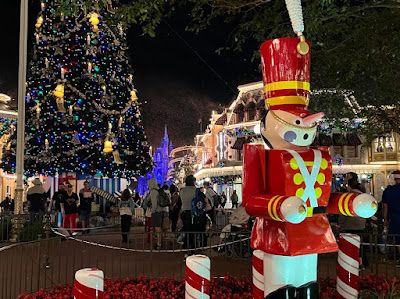 The holiday season is an extra magical time to visit the Walt Disney World Resort. One special event only available during the holiday season is Mickey's Very Merry Christmas Party at the Magic Kingdom. Celebrate the season with a special Christmastime fireworks show, parade, stage shows, dance parties, treats and more! This special event takes place on select nights from early November until a few days before Christmas.

Know Before You Go

In 2022, Mickey's Very Merry Christmas Party will take place on 24 select nights from November 8th through December 22, and ticket prices vary by date. In 2022, prices ranged from $149-$199 per guest ages 10 and up and $139-$189 for guests ages 3-9, excluding tax.
It's very important to know before arriving at the Magic Kingdom that this is a separately ticketed event which means that your general admission ticket does not include admission to this party. Each party night the Magic Kingdom will close at 6pm to day guests and the party officially takes place from 7pm to midnight. However, party ticket holders will be admitted to Magic Kingdom park as early as 4pm. That means party ticket holders get even more time to enjoy the park before the official party begins. It's also important to know that your MVMCP ticket does not require an additional theme park ticket or park pass reservation to attend.
If you are planning to attend Mickey's Very Merry Christmas Party in future years, you'll want to remember that tickets typically go on sale in July and party dates will sell out as you get closer to the holiday season. In 2022, all MVMCP dates were sold out by November 19th.
Now, let's review what you can expect at the event.

Guests can enjoy complimentary cookies and festive beverages at 5 holiday treat locations located throughout the park. Each location offers a different cookie like Snickerdoodle, Gingerbread or Chocolate Chip along with Hot Cocoa, Eggnog or Apple Cider. Allergy-friendly and alternative healthy options are available upon request. Make sure to visit all 5 treat locations to grab one of each cookie and beverage offered.
The cookies are individually packaged so they make for great souvenirs to bring home with you! We grabbed one of each cookie to bring home to our kids and they loved them! I managed to try a Snickerdoodle and Gingerbread cookie before my boys got ahold of them and they were delicious. I wish I had picked up a few more!
You can find the treat locations marked with a candy cane icon on the park map. When in the park, look for the giant candy cane striped inflatable to find each location.

In addition to the complimentary treats, there is also specialty food and beverages that are available throughout the park for purchase. The treats at this year's party include items like the Once Upon a Christmas Tart from Sunshine Tree Terrace and a Sugar Plum Shake from Auntie Gravity's Galactic Goodies. The Holiday Dinner Dog at Casey's Corner sounds especially... interesting. Unfortunately, I didn't get a chance to try any of the speciality items this year. There were just too many activities during the party and I didn't find time to grab one of these items. Next time I'm making snacking more of a priority.

Start your holiday festivities off by picking up a complimentary holiday ornament! This is an extra special treat included with your party ticket admission. The ornaments are super cute and a great keepsake to remember not only the party but also Walt Disney World's 50th anniversary celebration. The holiday ornaments are available to pick up on Market Street until 8pm so don't forget to grab yours! 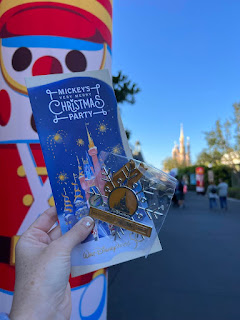 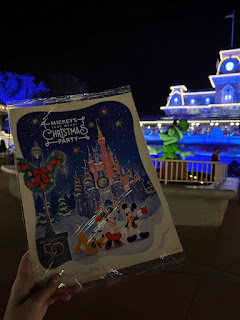 In addition to receiving a holiday ornament, guests can also pick up a complimentary holiday-themed 50th anniversary celebration commemorative print as they exit the party. Each guest is limited to one print and one ornament with their valid admission ticket. These special gifts were a really nice addition to the party and helped me feel like I was getting more bang for my buck.

Characters also get into the spirit dressed in their holiday best for meet and greets! You'll find character greetings throughout the park during the party including some rare characters like Jack Skellington and Scrooge McDuck. This was another activity during the party that we didn't manage to fit in. We did spot some characters at the meet and greets and they looked very festive in their holiday attire. The character greetings definitely make for a cute photo op for a Christmas card.

Entertainment is where MVMCP really shines! There are two stage shows, a parade, fireworks and two dance parties. Each stage show has several viewings throughout the night so you can decide which time works best for your schedule or see a show twice if you really feel inclined! You'll find Mickey's Most Merriest Celebration on the Castle Forecourt Stage and A Totally Tomorrowland Christmas on the Rockettower Plaza Stage in Tomorrowland.
Mickey's Once Upon a Christmastime Parade offers two viewings, one at 8:30pm and one at 11pm. The parade is definitely worth seeing! There are a ton of great floats, characters, toy soldiers and Santa Claus. You can't miss seeing Santa Claus close out the parade!
Another must-see event entertainment is Minnie's Wonderful Christmastime Fireworks Show. Although I prefer viewing the fireworks from Main Street, viewing locations are available throughout the park and are often less crowded in the park's other lands. 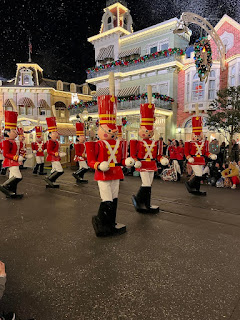 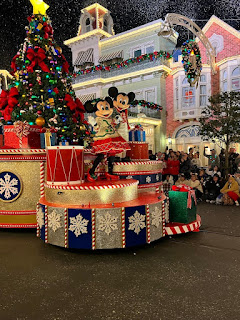 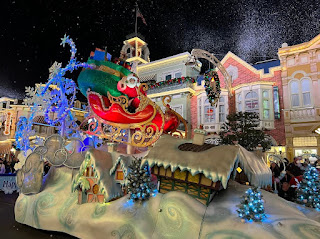 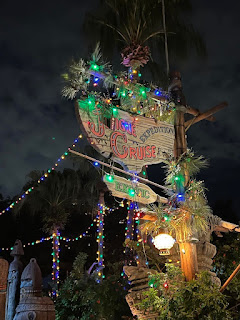 The characters aren't the only ones to get into the holiday spirit. Several attractions have a holiday-themed overlay during the party. In Adventureland, you can visit the Jingle Cruise and over in Fantasyland you can ride the Mad Tea Party with holiday music and lighting. Tomorrowland has three holiday-themed attractions; Tomorrowland Speedway, Space Mountain and Monsters, Inc. Laugh Floor. The Tomorrowland Speedway holiday overlay is so cute with a ton of lights along the track. We found the Space Mountain holiday overlay to be slightly disorienting in that the lighting made everything more visible and thus more scary when you can see everything around you. Some of the lights were also pointed directly in line with our eyes and were slightly blinding, hence the disorientation. We prefer the traditional Space Mountain where you're thrown into the darkness of outer space but I appreciate the effort to add a holiday overlay to this attraction.

There is so much to do at the party that it's about near impossible to see and do everything that is offered. Here are some tips and tricks to help you in your planning:
Have you attended Mickey's Very Merry Christmas Party before? And if not, is attending this special event on your must-do list? Let us know in the comments.