How to Speak Disney 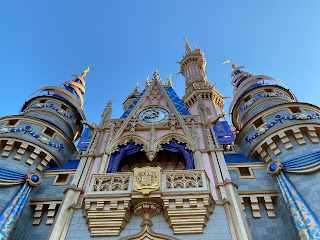 If you've ever heard someone talking about their Disney vacation, you may have thought they were speaking another language with all of the abbreviations, acronyms and Disney terminology. Here at Kingdom Konsultant Travel, we've compiled a list of the most commonly used terms and abbreviations you may hear when planning your Disney vacation. With this list you'll be talking about your ADR at CRT before you know it! (If you're looking for more information about a specific abbreviation or terminology, click on the link when available.)

AK or DAK - Disney's Animal Kingdom Theme Park was the last of the four Florida theme parks to open in 1998. The park's icon is the Tree of Life. AK is home to stellar attractions like Avatar Flight of Passage and the amazing Festival of the Lion King, a Broadway style show.

AoA - Disney's Art of Animation Resort is a Value Resort located in the Wide World of Sports Resort Area.

BLT - Bay Lake Tower at Disney's Contemporary Resort (not to be mistaken for the delicious sandwich) is a Deluxe Villa Resort located in the Magic Kingdom Resort Area.

BOG - Be Our Guest Restaurant is a table service restaurant at the Magic Kingdom that allows you to dine in Beast's enchanted castle.

BC - Disney's Beach Club Resort is a Deluxe Resort located in the Epcot Resort Area.

BTMRR - Big Thunder Mountain Railroad is rollercoaster in Frontierland at the Magic Kingdom Park aka the wildest ride in the wilderness.

CM - Cast Member is what Disney calls employees that work at the Disney Parks or at a Disney Store.

CP - Candlelight Processional features a celebrity narrator, 50-piece orchestra and a choir, telling the story of Christmas a the Epcot International Festival of the Holidays.

CRT - Cinderella's Royal Table is a table service restaurant inside Cinderella's Castle at the Magic Kingdom.

DCA - Disney California Adventure Park is the second park at the Disneyland Resort and opened in 2001. It's home to some amazing lands like Avengers Campus, Radiator Springs, and Pixar Pier.

DCL - Disney Cruise Line is a great vacation option if you're looking for Disney's exceptional service on the high seas.

DDP - Disney Dining Plan* offers the convenience and flexibility of prepaid dining at over 200 locations through the Walt Disney World Resort.

DHS/HS - Disney's Hollywood Studios was the third of the Florida theme parks to open in 1989. It's home to some of the newest lands at Walt Disney World; Star Wars: Galaxy's Edge and Toy Story Land.

DLH - Disneyland Hotel is one of the three resorts on property at the Disneyland Resort. It offer luxurious rooms and has monorail themed waterslides.

DS - Disney Springs is a shopping, dining, and entertainment area at the Walt Disney World Resort.

F&W - Epcot International Food & Wine Festival, now from dates in July to November, is a culinary and entertainment event held at Epcot.

FotA - Epcot International Festival of the Arts is a celebration of the visual, culinary and performing arts from around the world, featuring live Broadway-style entertainment and original artwork in January-February.

FOP - Avatar Flight of Passage is a thrill ride in Pandora - The World of Avatar at Disney's Animal Kingdom Theme Park.

FW - Disney's Fort Wilderness Resort & Campground is located in the Magic Kingdom Resort Area. They have Cabins and Campsites available.

IASW - "it's a small world" is a slow moving, boat ride featuring the most well-known (and possibly biggest earworm songs) of all time, located in Fantasyland at Magic Kingdom Park.

KTTW Card - Key to the World Card is a special card you receive upon check-in at your Disney World Resort hotel. This card can be used in place of a MagicBand to open your hotel room door and charge purchases to your room.

LL - Lightning Lane is the new queue that will allow guests to bypass the standby queue for select attractions. (Similar to the former FastPass+) Unlike the former system, Lightning Lane selections will be made on the same day of your visit and can be used across multiple theme parks.

MB - MagicBands are an all-in-one device that connects you to your Walt Disney World vacation choices that have been made on the My Disney Experience website and app.

MDE - My Disney Experience is where you can make your day-to-day plans for your Walt Disney World vacation.

MK - Magic Kingdom Park was the first park to open at Walt Disney World on October 1, 1971. The park's icon is Cinderella Castle.

MNSSHP - Mickey's Not So Scary Halloween Party* is a separate ticketed event held on select nights August through October at the Magic Kingdom. Admission to the event includes trick or treating, a Halloween parade and fireworks, and lots of fun!

PH - Park Hopper Option is an upgrade option to theme park tickets that allows guests to visit more than one park on the same day. Currently, guests with the Park Hopper Option on their ticket can visit the next park starting at 2pm.

QS - Quick Service restaurants give you the flexibility to stop and enjoy casual meals without needing advance dining reservations.

ROTR - Star Wars: Rise of the Resistance is a thrill ride in Star Wars: Galaxy's Edge at Disney's Hollywood Studios. This is currently the only attraction at Walt Disney World that requires you to join a virtual queue and there is no standby queue currently available.

SSE - Spaceship Earth is a slow, dark ride attraction in Epcot and is also the park icon for the park.

WDW - Walt Disney World Resort is located in Orlando, Florida and is home to four theme parks, more than 25 Disney Resort hotels, Disney Springs, four golf courses, and more. Walt Disney World will be celebrating it's 50th Anniversary starting on October 1, 2021 and the celebration will last throughout 2022.

Deluxe Resort: Deluxe Resorts are Disney's most luxurious resorts with multiple on-site dining options, recreation, and amenities. Deluxe Resorts are also closer to select theme parks and often offer an additional mode of transportation to some parks, such as monorail or boat, or are within walking distance.

Disney Genie Service: A complimentary and convenient new digital service designed to provide guests with more flexibility and better tools to help make the most of their visit.

MagicMobile: Provides guests with a convenient and contactless way to enter the theme parks, unlock their Resort Hotel door and more through the Wallet app on their iPhone or the digital wallet on other smart devices.

Park Hop: Go from one theme park to another in the same day.

PhotoPass: Disney PhotoPass Service allows everyone to get in the picture. Disney PhotoPass photographers are stationed throughout the Walt Disney World Resort at select attractions and iconic park locations.

Rope Drop: Getting to the Disney park early so you can enter the park right when it opens or when the "rope drops".

Value Resort: Value Resorts have the lowest room rates on property and tend to have the fewest hotel amenities. You still get the benefit of staying at a Disney Resort Hotel for a more affordable price.

Did you learn some new Disney lingo? Is there a term or abbreviation we're missing that should be added to this list? Leave use a comment!