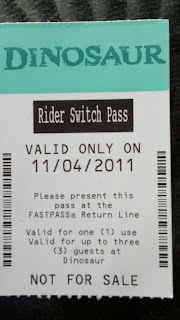 Have you ever walked up to only to discover that your little one is half an inch too short to ride? Or hiked to Expedition Everest and had your little one say, “Mommy, I don’t want to go on that.”  It appears your only options are to either have one parent ride and the other miss out on the ride, or skip the ride altogether. I don’t know about you, but most people do not want to spend their hard earned money to come to and skip some of the rides.  This is where Rider Swap (a/k/a Rider Switch and Child Swap) comes to the rescue.


Picture this. You see the rust-colored on the horizon.   You have been looking forward to riding it since your last vacation. Suddenly you are faced with the fact that your youngest is just a little too short to ride, or that he is just not ready to brave “The Wildest Ride in the Wilderness.” NO PROBLEM! Just follow these 3 easy steps.

Step One: Head to the entrance of the ride with your whole family and ask the cast member for a Rider Swap pass.  The pass is valid for up to 3 guests.


Step Two: One parent will enter the stand-by line and ride with the older (or braver) child.

Step Three: Once they are done riding, they then “swap” riders. The parent that did not already ride will take the and enter the line with the older child. This will allow little to no wait at all, and the older child gets to ride twice!

Rider Swap is the ultimate solution for concerns of “I will not take my children to Disney because they cannot ride some of the rides.”  This was so useful for my family on our last trip to Walt Disney World. The following attractions offer Rider Swap:

So next time you begin contemplating a trip to the Most Magical Place on Earth, do not fear losing precious memories of experiencing “big kid” rides.  Rider Swap is there to make sure everyone has a magical time.  Disney really has thought of everything!