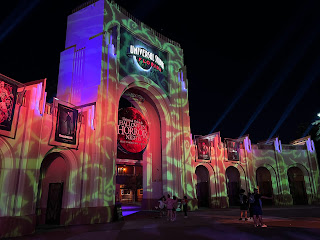 I am in no way a fan of horror, haunted houses or generally scary things, so when my friends decided to attend Halloween Horror Nights at Universal Studios Florida, I had serious concerns. Like, "what am I getting myself into" concerns. Eventually, I succumbed to peer pressure and purchased my ticket but was still very hesitant about attending this event.

I am happy to report that I survived my first Halloween Horror Nights and I actually had some fun! Oh, don't get me wrong... I was terrified numerous times throughout the event but I also laughed a lot.

Halloween Horror Nights, aka HHN, is a separately ticketed event on select nights from early September through Halloween night each year. Dates are subject to availability so if you are dying to go (see what I did there?!), then make sure you purchase your tickets early. It's a separately ticketed event which means your regular theme park admission ticket does not include admission to this event.

Unlike some other Halloween parties in the Orlando area, this event comes with a warning. The event may be too intense for young children and is not recommended for children under the age of 13. Also, no costumes or costume masks are allowed. We saw some children who were clearly younger than 13 in attendance so depending on how into scary things your kids are, they might be fine at this event or it may scar them for life. To be honest, it's an event that could traumatize an adult so think very carefully before you purchase your tickets for yourself or your children under 13. 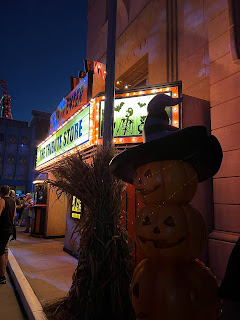 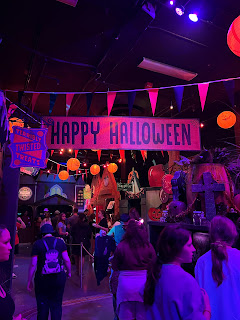 So what exactly is there to do at Halloween Horror Nights? The main draw to this event are the haunted houses. Each year there are different themes for the 10 haunted houses located throughout the park. This year some of the houses included The Weeknd: After Hours Nightmare, Halloween, Universal Monsters: Legends Collide and Dead Man's Pier: Winter's Wake. As I mentioned before, I'm a bit of a scaredy-cat so I only ventured into two of the haunted houses. 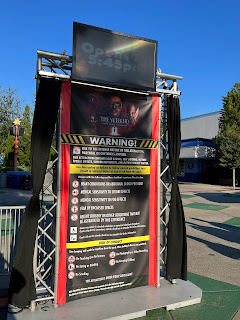 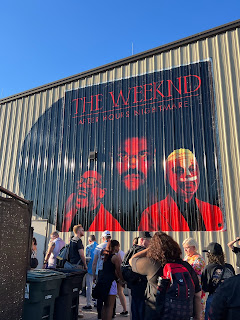 The first house we visited was The Weeknd: After Hours Nightmare and I was pleasantly surprised that I actually enjoyed it. I love The Weeknd's music so I figured that would be an easier house to do since I could sing along to the songs. I was the first one in my group to enter the house, so I was slightly terrified for the scareactors to jump out at me, but I left the house laughing more about being scared than being terrified. The other house I entered was Dead Man's Pier and I'm so glad I did! The house was so well done, with the costumes, set designs and special effects. I felt like I spent most of my time in the house admiring the craftsmanship that I wasn't as scared. I definitely still was though, just not as much.
In addition to the haunted houses are five scare zones. And this is where the event got really frightening for me. Scattered throughout the park are scare zones where scareactors will stalk and jump out at you as you walk through the area. Each scare zone has a different theme. Some of the themes this year included Horrors of Halloween, Sweet Revenge and Conjure the Dark. The scareactors that really got me were the ones with the chainsaws who chased me across the street. That was slightly terrifying and I'm just happy that I went through that section of the park during daylight hours or I may have bailed on the event. If you are worried about the scare zones, make sure to take a look at the park map so you can try to avoid them as best as possible. Sometimes, they are unavoidable so my advice to you would be to stay on the sidewalks and try to appear unfazed as you walk by.

The event also has two live stage shows. Unfortunately, one of the stage shows wasn't running the night we attended but we did get to see the Halloween Nightmare Fuel Wildfire show. I really enjoyed the show and there were several moments where my friends and I asked "how did they do that?!" It was a show worth seeing but it also came with a disclaimer. The show contains some adult content so if that's not your thing, better to skip the show.

If the haunted houses, scare zones and shows aren't enough, you can also experience rides and attractions throughout the night. Not all attractions are open but we were able to ride the Revenge of the Mummy, Hollywood Rip Ride Rockit, and walk around The Wizarding World of Harry Potter - Diagon Alley. This is a great spot to go if you need a break from the terror as there weren't any scareactors in Diagon Alley. We took a quick break there and watched the dragon breathe some fire before heading back out into the night. 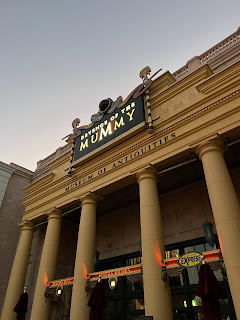 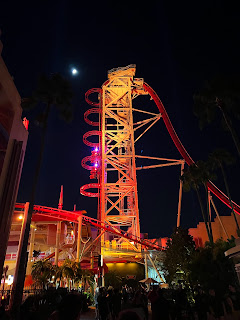 Like any good special event, HHN also has speciality eats and drinks available for purchase. I have to say, this was the part of the event that I was most looking forward to and it ended up being the most disappointing. It could definitely be that we just ordered poorly but everything we tried wasn't very good and was pretty pricey for the portion size. Some of the items I found lackluster were the Twister Taters and the "Wanna Play?" Beignet. Also, the Classic Pizza Fries were overrated. There. I said it! They were okay but after hearing so much about them before the event, I was expecting something more and it didn't live up to the hype. 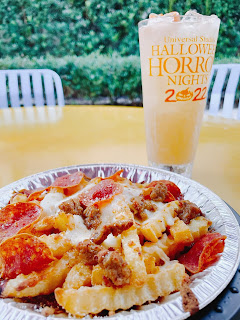 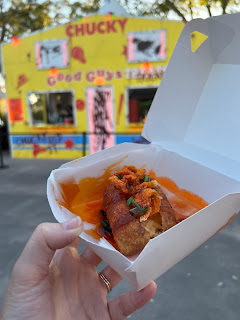 Here are some important things to know before you go. Universal Studios Florida will close at 5pm on HHN to regular admission guests and will only be open to HHN ticket holders after that time. The event starts at 6:30pm and closes at 2am on all event nights.

For guests with event admission the same night as your daytime theme park admission, you can participate in Stay & Scream. Stay & Scream allows you to avoid exiting and re-entering the theme park before the event which gives you a head start to all the fun. As the park starts to switch to Halloween Horror Nights, you can head to one of the Stay & Scream areas in the park until the event starts. While you wait, you can purchase food and beverage items and you can also start to line up for the various Haunted Houses. We ended up doing the Stay & Scream and I thought it was really beneficial. 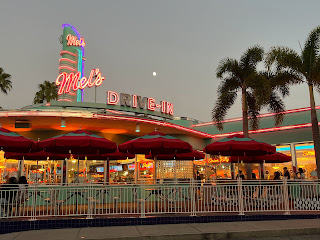 If you really want to see and do everything available at HHN, I highly recommend arriving early to beat the rush and participating in the Stay & Scream if you can. If you can't do the Stay & Scream but are staying at a Universal Orlando Hotel, you get special access to a dedicated entry gate each event night up until 8pm. And if you really, really, really need to see and do everything, consider purchasing an R.I.P Tour. Similar to the daytime V.I.P Tour, the R.I.P Tour provides a guided V.I.P walking tour of the event and gives guests priority entry to haunted houses. 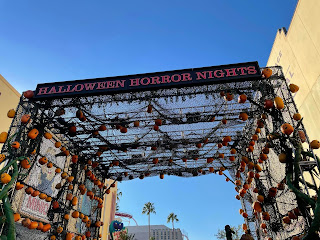 So, would I attend Halloween Horror Nights again? I'll give it a big maybe. I didn't love the food or the scare zones but I thought the haunted houses and the show were worth it. It's an experience that I'm glad I did but I'm not dying to attend again any time soon.

Are you a fan of Halloween Horror Nights? If you haven't been before, is it on your Must-Do list? Let us know in the comments.

Ashley Lehman
Ashley is a Hufflepuff who loves rollercoasters and thrill rides. You can email Ashley at ashley@kingdomkonsultant.com.

October 18, 2022
Universal's CityWalk is a dining, shopping and entertainment area with so many options.  Where to begin?  The Kingdom Konsultant agents have been busy trying the options for you to help give you an idea of what to expect and maybe narrow some things down.  All of these restaurants are quite popular and reservations are recommended.  3. Bigfire Bigfire is going to be your more upscale/fine dining option at Universal CityWalk.  The décor is modern and features an open kitchen, the bar serves up craft cocktails and the menu features wood-fired dishes.  All of the food we tried here was delicious and the prices felt reasonable for the quality of food we tried.  If you want a nicer meal, definitely check out Bigfire (but if you show up in theme park clothes, you will be just fine too!). For more details,  click here.   2. The Cowfish Sushi Burger Bar This is simply one of my favorite places to eat.  Burgers please the pickiest eaters while sushi fans will rejoice at the selection.  For
Post a Comment
Read more

September 07, 2022
I recently sailed on Royal Caribbean Cruise Line's Liberty of the Seas for my Honeymoon.  The trip itself was quite amazing, but we had a special dinner at Sabor that wasn't on any pre-planning options.  While at dinner at the Chef's Table earlier in our cruise, a nice gentleman from Sabor came by and told us about a similar experience they were trying out at that restaurant.  Of course we decided we had to give it a try! We got the menu to look over and our host for the night came to greet us and go through what to expect etc. This was a new thing they were trying, so we didn't really know much about it going in other than "if you liked the Chef Table, come try this!" He was wonderful, and we had a great time with him. We were at a big table off to the side as you went in (our whole Chef's Table party decided to go for this, so we were old friends at this point!) The table was semi-private, but still somewhat part of the normal dining area so we could pee
Post a Comment
Read more