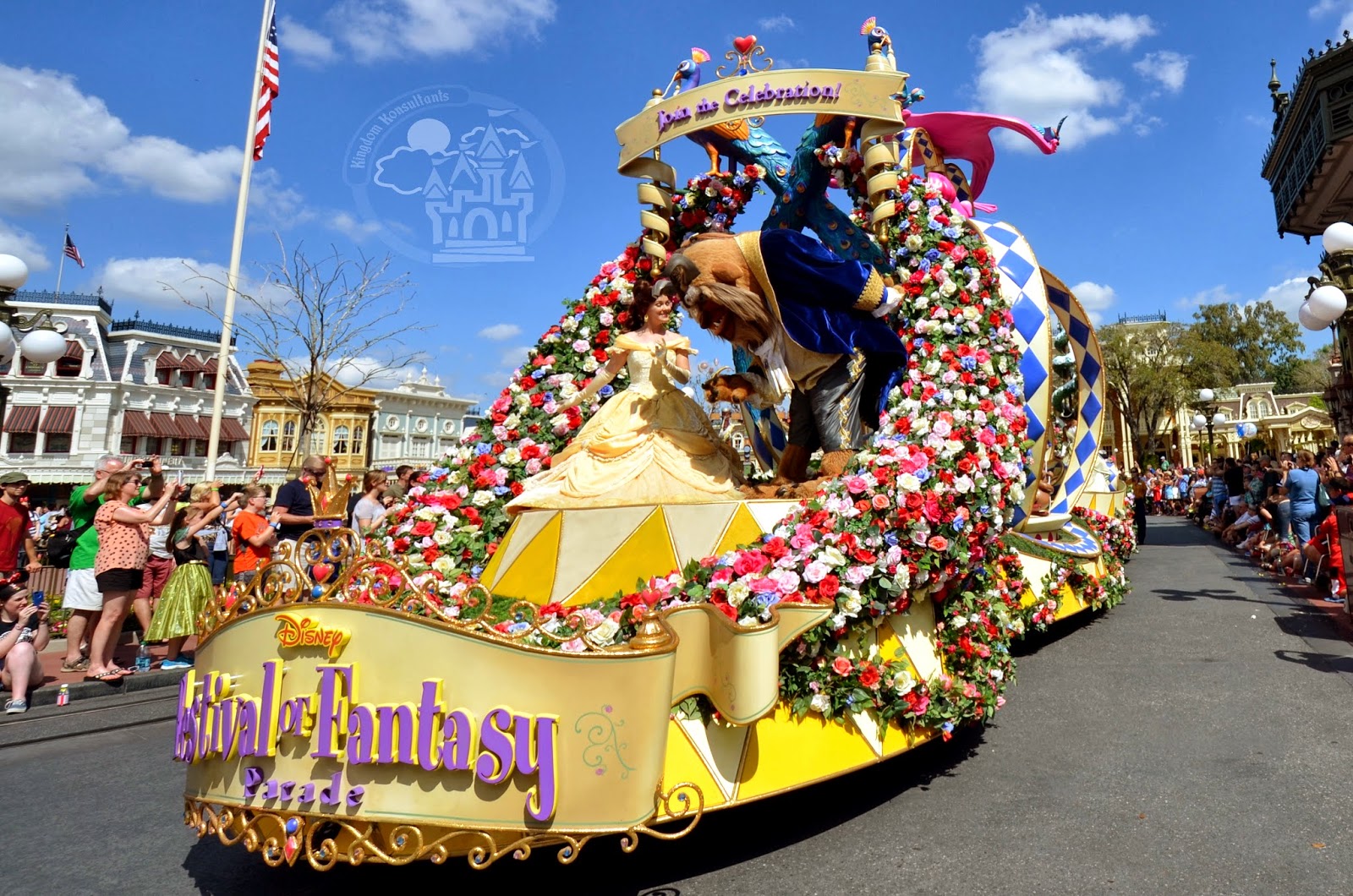 I admit it- when I heard Walt Disney World was replacing the daytime parade at the Magic Kingdom, I was a bit timid. I'm a bit of a traditionalist when it comes to Disney- I enjoy and look forward to the new experiences, but I hate to see old favorites go. The Dreams Come True parades all share a special place in my heart- I've gone from teenager to adult watching them, and had shared special memories watching them as a daughter, then cast member, then honeymooner, and most recently, a parent. But even I have to admit- under all the name changes (from "Share a Dream Come True", to "Disney Dreams Come True", to "Celebrate a Dream Come True"), it was still basically the same parade with a slightly different soundtrack. If Walt Disney ever taught us anything, it was to Keep Moving Forward. And move forward they did! 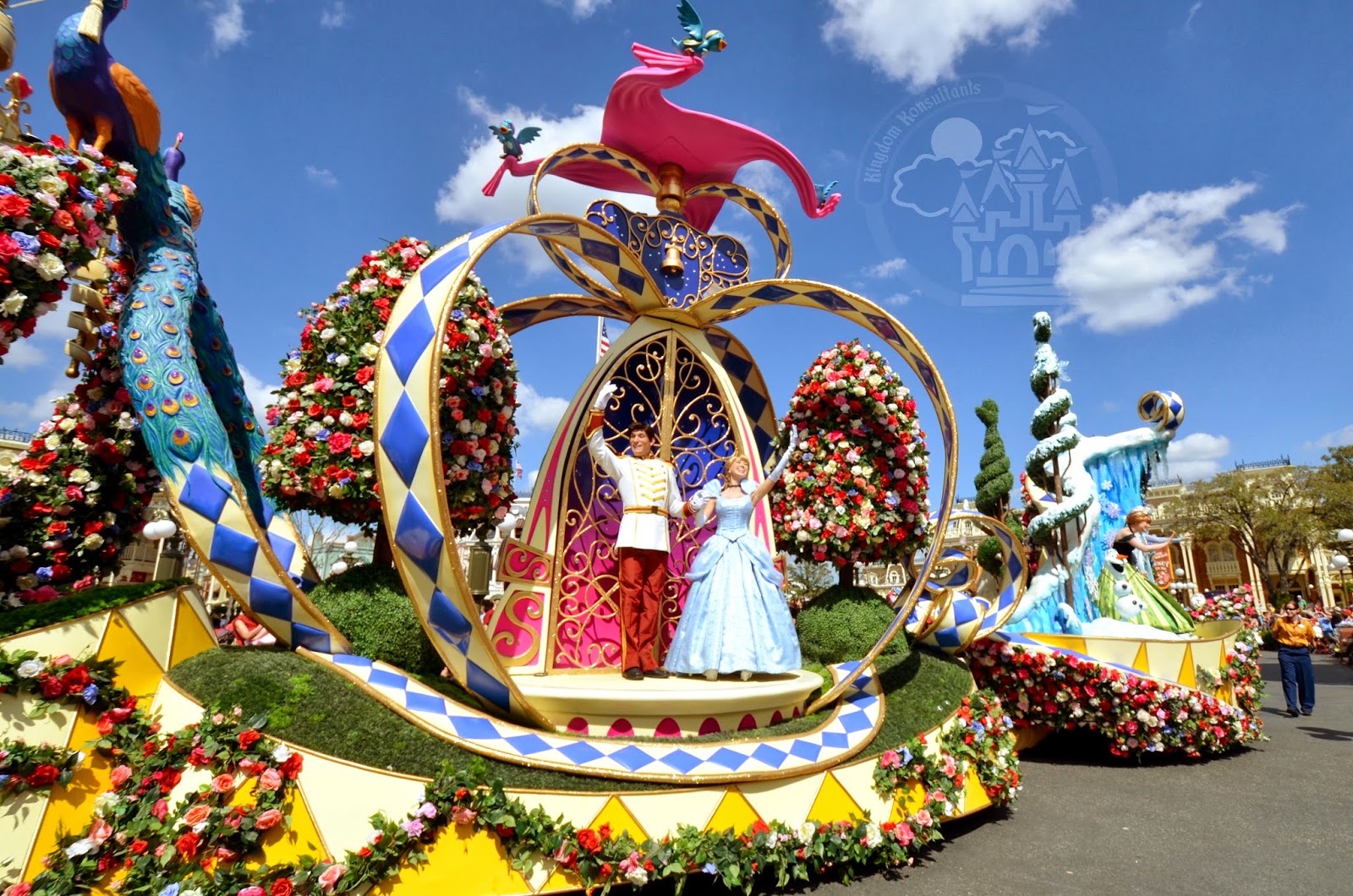 Soon, artist renderings of the new parade were released, and I started to get excited. Then, pictures of the floats and costumes came out, along with a fashion show to give a little taste. Then I became even more excited. When I discovered that I would be visiting on a Travel Agent training trip just a week after the official parade debut, you couldn't hold me back if you tried- I was beyond excited and thrilled to experience it. 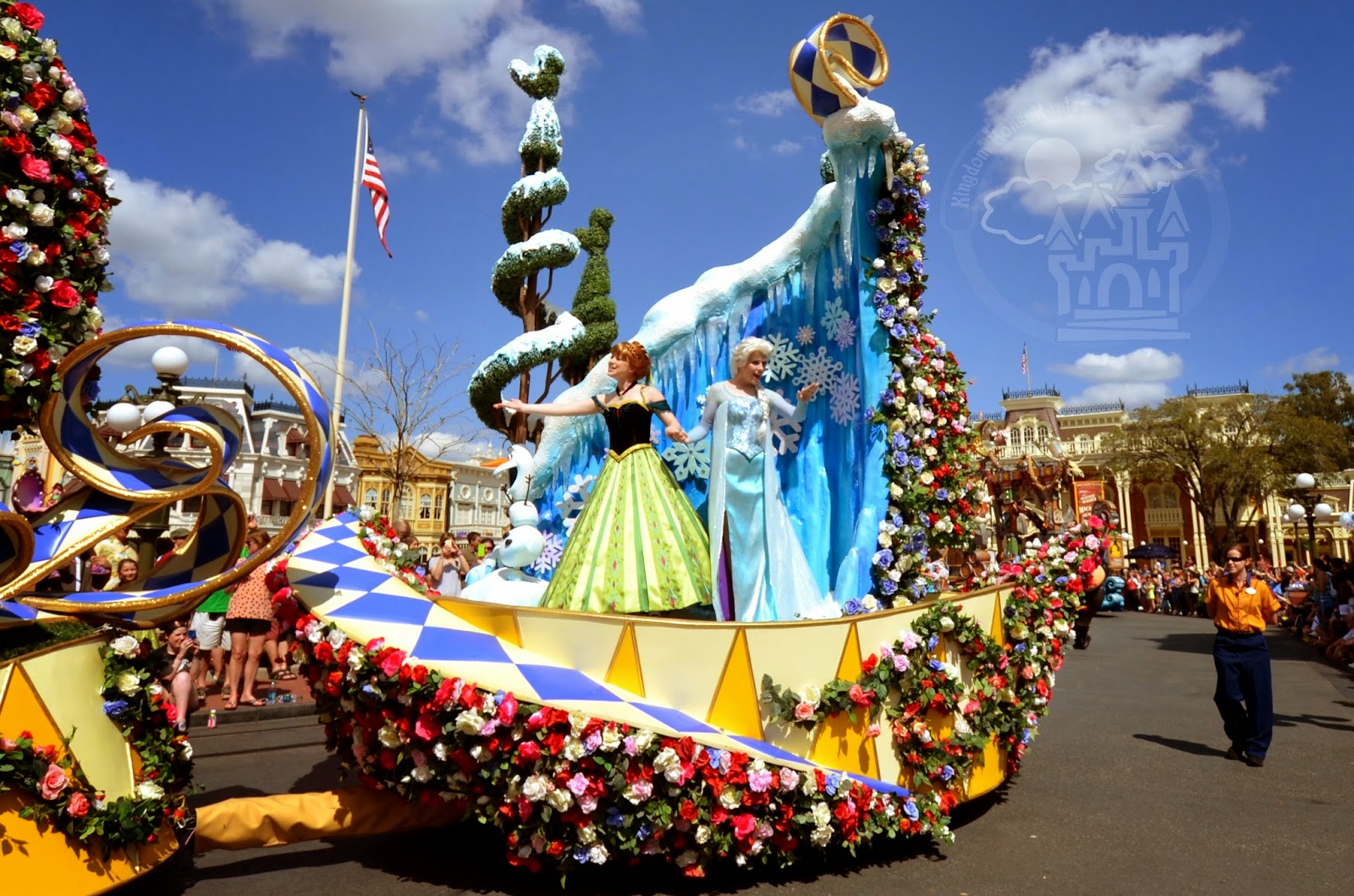 When the big day finally arrived, I was pretty giddy. I think I jumped up and down a few times with a grin on my face (I do that sometimes. Ask my roommate for the week, agent Betsy). I hurried into the Magic Kingdom and staked out my spot in town square about half an hour before showtime; a reserved spot across form the castle is also available with Fastpass+. We made small talk with a very friendly Cast Member- who told us that even after seeing it half a dozen times, it still made him feel like a little kid again. The pressure was now on for this parade to live up to our expectations! 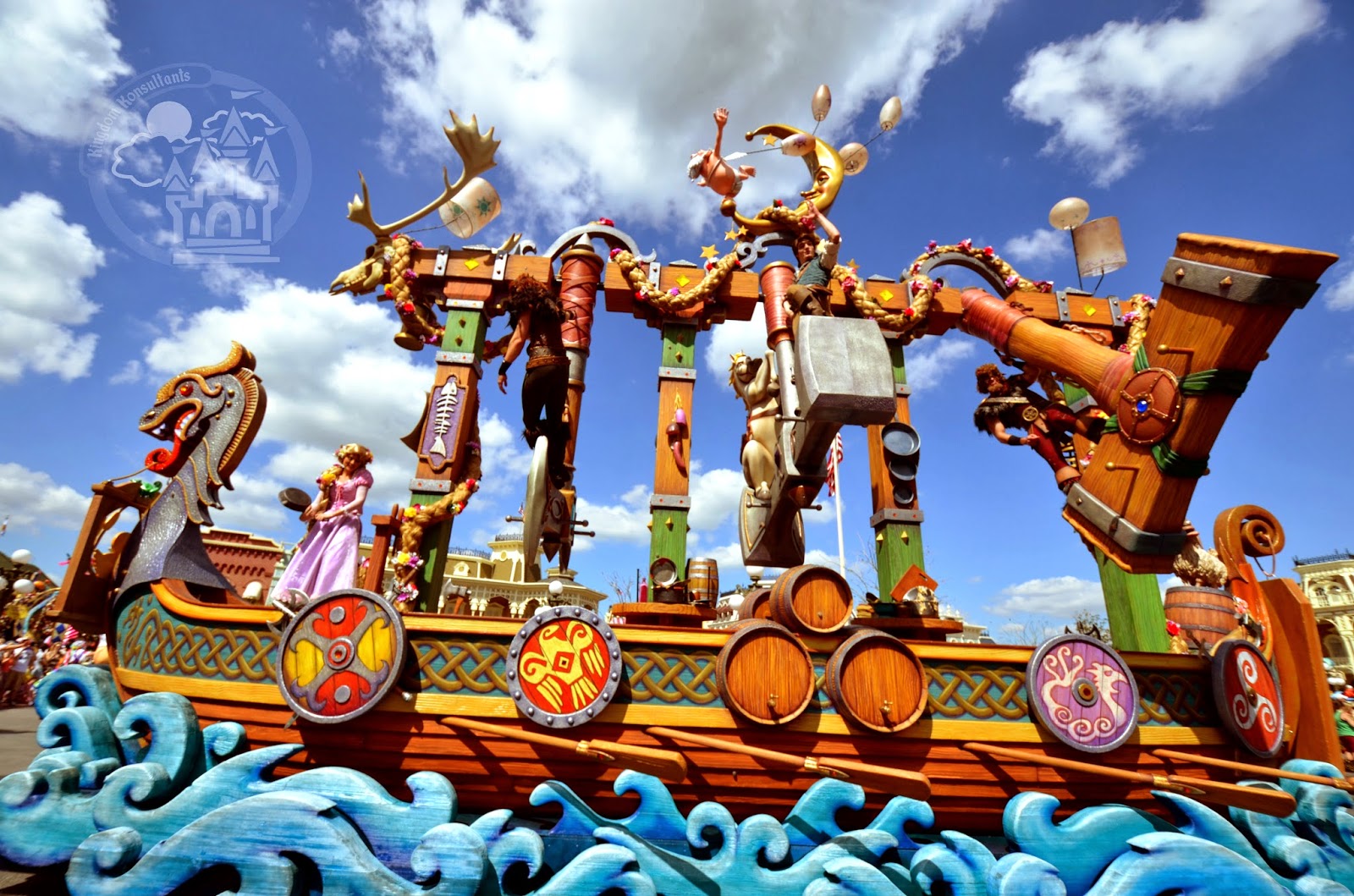 When the music began, I knew that it would be all that I dreamed, and more. The tune is so wonderful and catchy- unique for each float with creative detail and nuances, yet so perfectly blended that the entire experience is seamless and immersive.  The level of energy between the performers and guests has to be experienced to be explained- it gave me chills! I can't think of a better way to get a pick-me-up while taking a break, perfectly timed mid-day when many guests may start getting worn out and need a second wave of energy to get them going again. 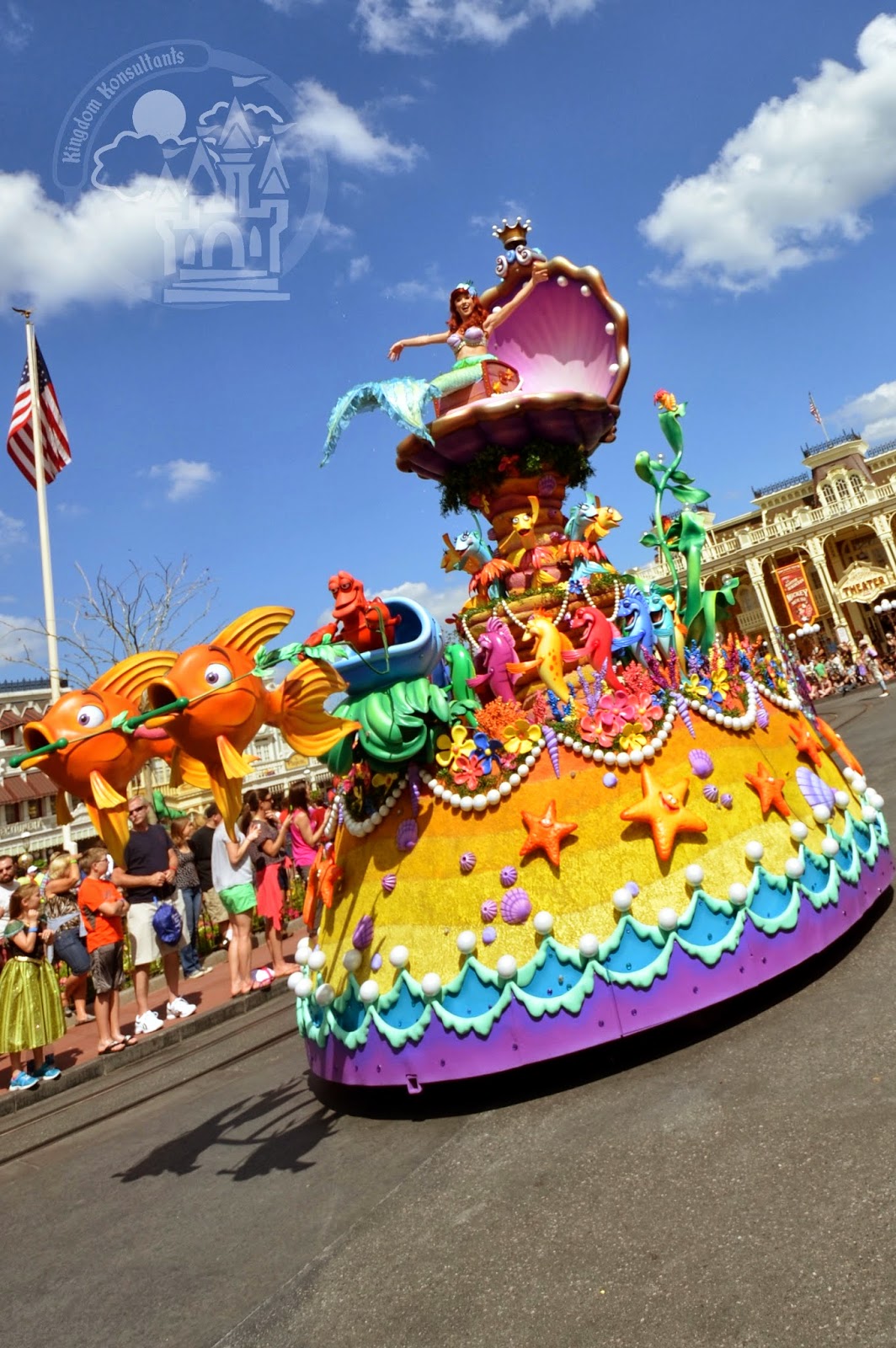 The first thing that strikes you upon seeing the parade is the color. This is a bright, vibrant parade with great use of color and fabulous artistic detail. It has to be seen more than once to take it all in.

The first float brings us the princesses- first Belle and Cinderella, along with their newest friends Anna and Elsa, with Tiana at the back. The details are amazing- Cinderella is dressed in her classic ball gown, but surrounded on her float by her pink dress (that I LOVE), which is being sewn by some of her mice friends.

They are followed close behind by Rapunzel, along with Flynn Rider and some of their buddies from the Snugly Duckling. I was pleasantly surprised by the energy on this float, as the axes swing back and forth like a pendulum. The detail continues, with Rapunzel's hair winding throughout the entire float. 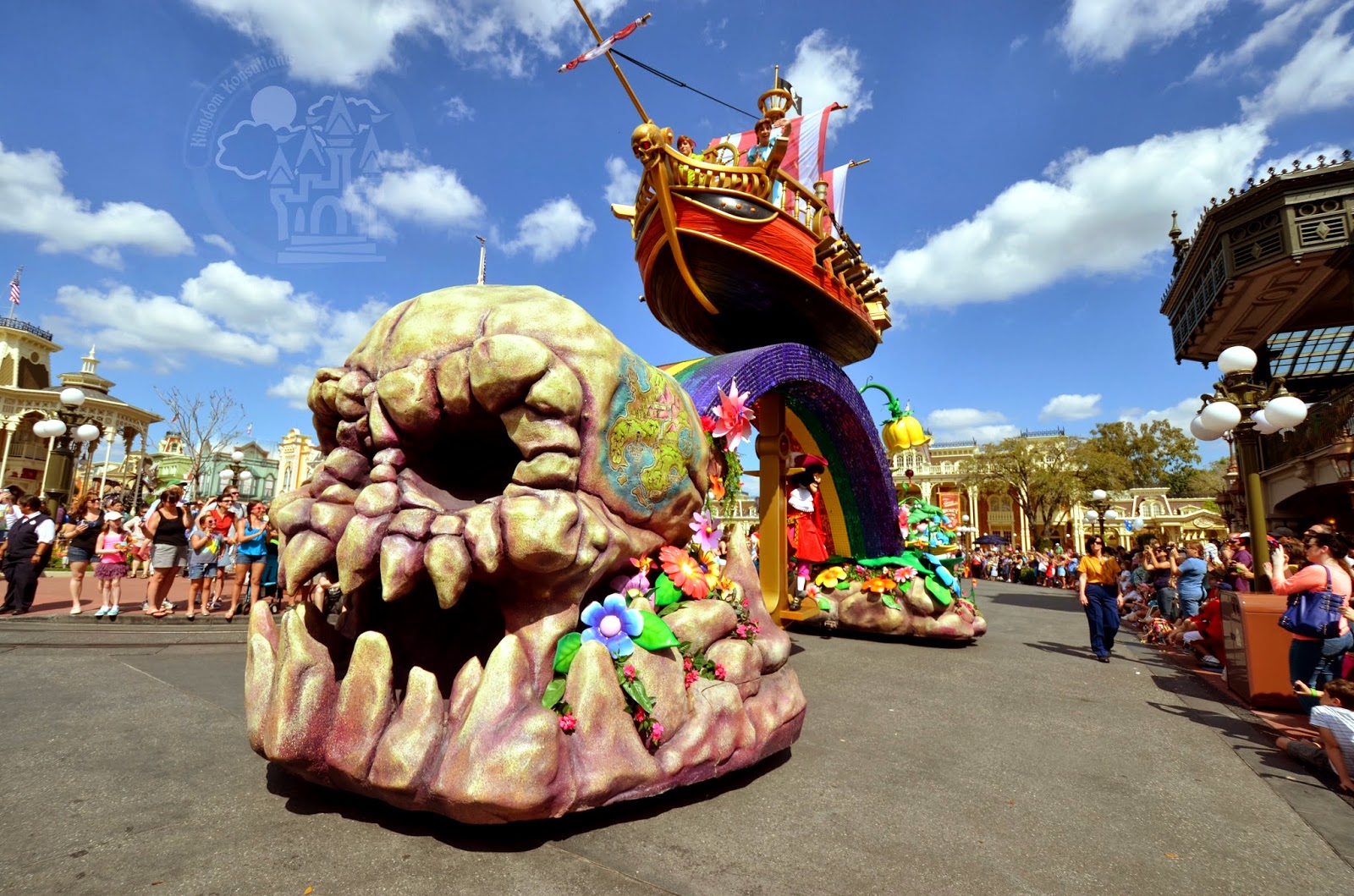 Ariel comes next, sitting high atop a seashell, surrounded by dancers on the ground in colorful aquatic costumes (such as seahorses and seashells). Several of her colorful "under the sea" friends are on her float as well.

She is followed by the Lost Boys, who are very reminiscent of the dancers in the Newsies and are introducing the Peter Pan float. This may be my favorite of the entire parade. It begins with Skull Rock, and Captain Hook hanging on an anchor. Peter Pan and Wendy float high upon the Jolly Roger, which is sailing over a rainbow. At the end of the rainbow is our favorite little fairy, Tinkerbell. Of course, the Tick Tock Crocodile isn't far behind, and Smee is trying to keep up as well. 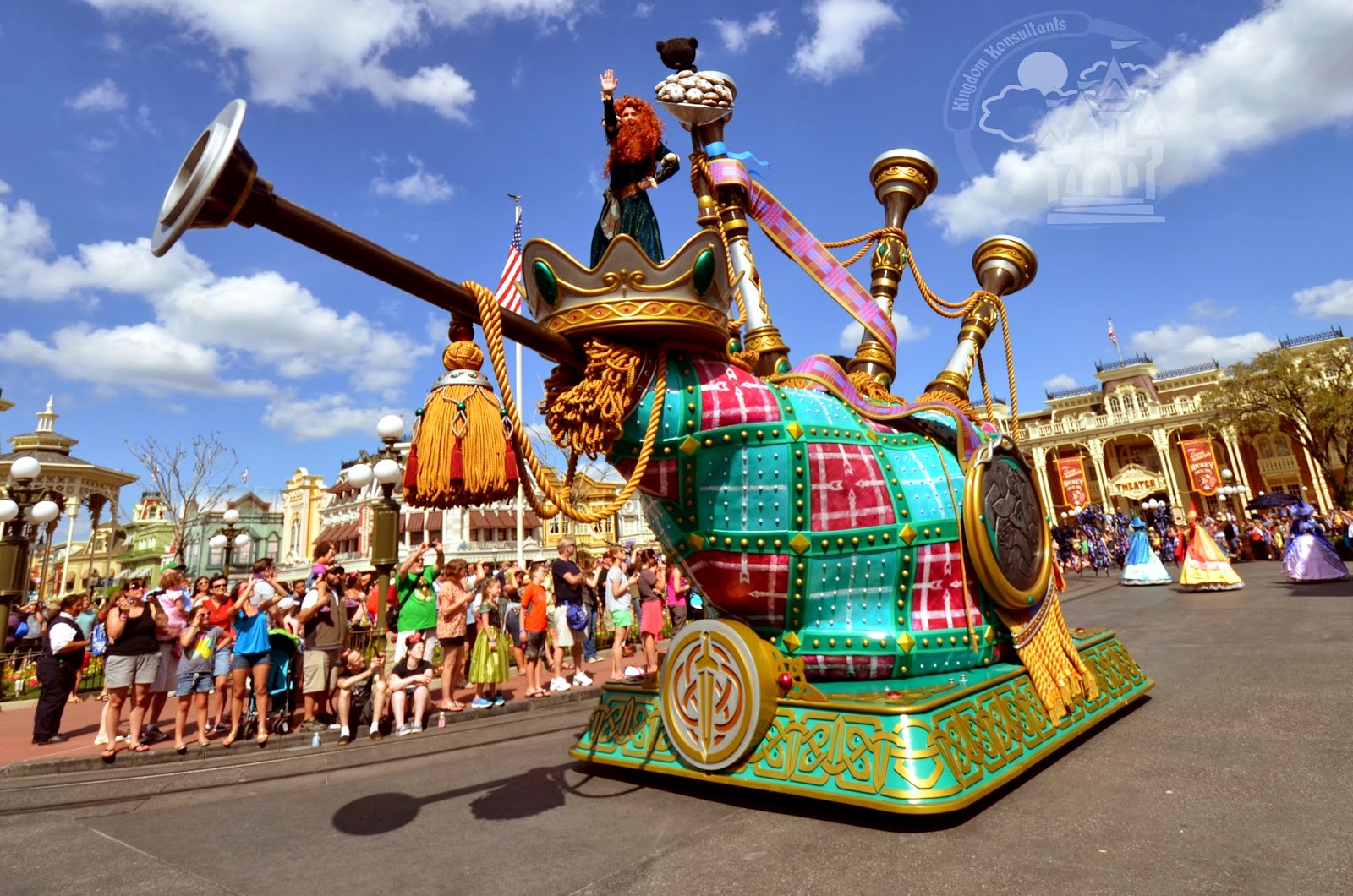 After Peter Pan comes a band of Scottish dancers, preparing the way for Merida, who is perched atop a gigantic bagpipe. Naturally, her brothers are traveling with her, in bear form of course. 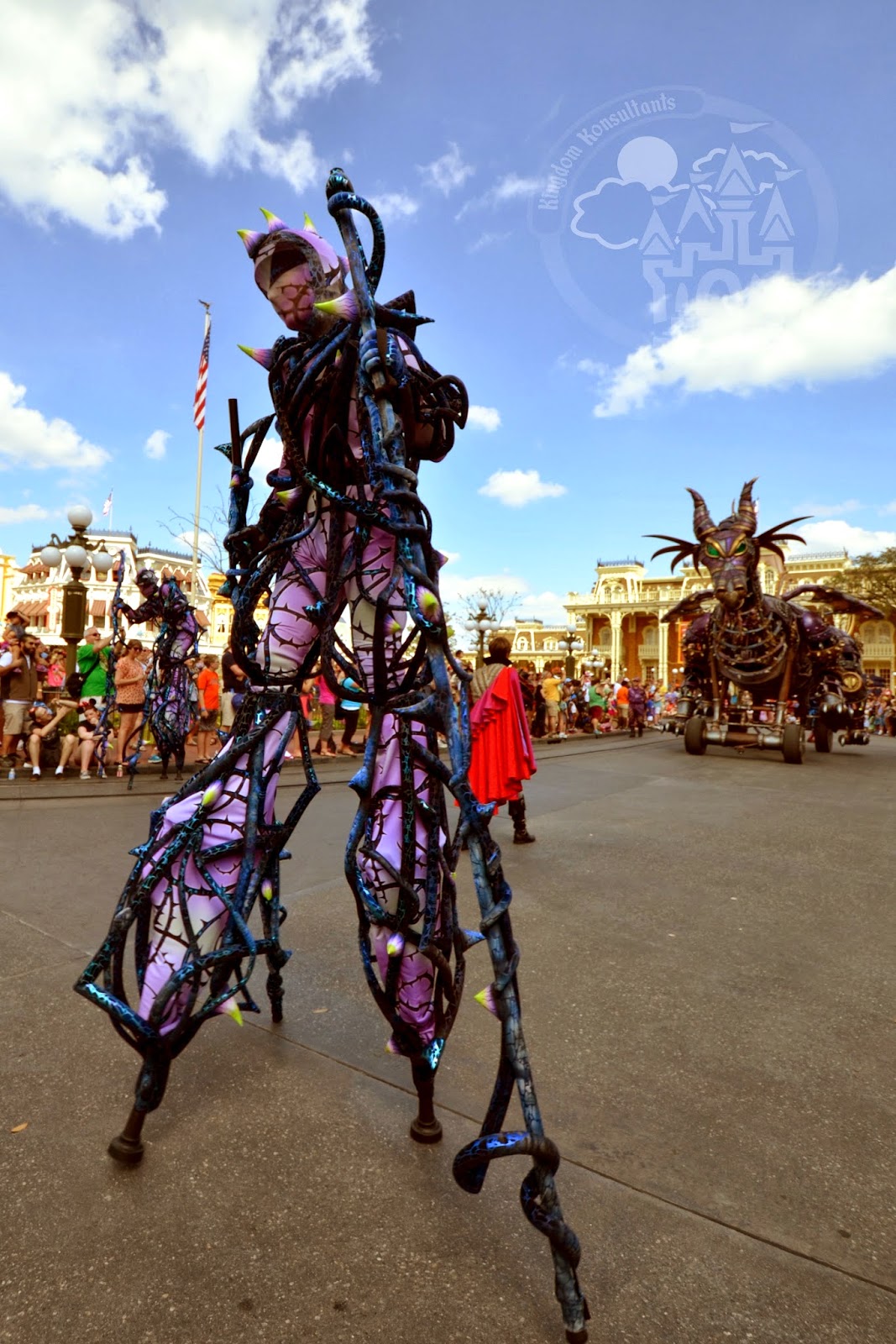 After the Brave float comes what might be the most anticipated part of the parade: the Sleeping Beauty float. This movie is represented in this parade not by Princess Aurora, but by the evil Maleficent in the form of a massive, steampunk inspired dragon. To say that the dragon is large and spectacular would be an understatement. Her legs move like she is actually walking, her head rises and sways, and a performer moves her tail back and forth. Flora, Fauna, and Merryweather float by happily, and then the suspense builds as thorn-stilt dancers and raven performers come by to intimidate the crowd. Maleficent is not far behind, in an epic battle with Prince Philip that builds up to her breathing fire into the air. She actually breaths fire! At this point the entire crowd gasps and shrieks with excitement and surprise, and everyone claps in amazement. I can't imagine that the excitement of this parade will go away very soon. 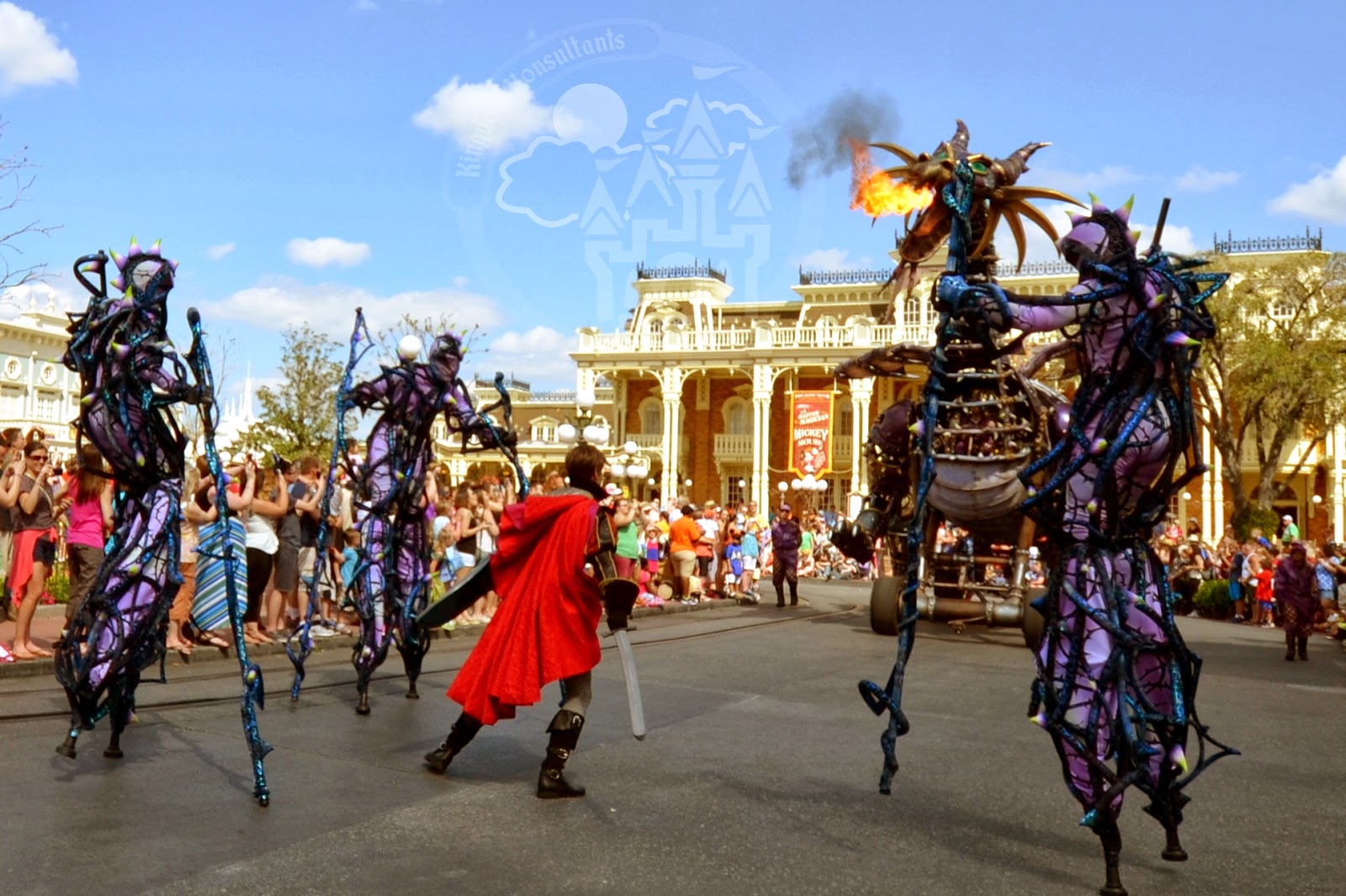 After the dragon comes the finale- a grand gathering of Disney friends and legends. The seven dwarfs dance happily past the crowd, along with their favorite girl Snow White. Pinocchio rides by on Monstro- a beautiful and colorful version of the whale in the movie- followed by a tribute to the new Storybook Circus section of New Fantasyland (including my favorite flying Elephant). Donald and Daisy are not far behind, on an energetic float inspired by Fantasia. As Pluto rounds up this float, the music changes to introduce the final stars of the parade- singing M-I-C-K-E-Y , MOUSE. Mickey and Minnie are floating in a giant hot air balloon, and of course their friends Goofy, Chip, and Dale are saying farewell to guests on the ground. 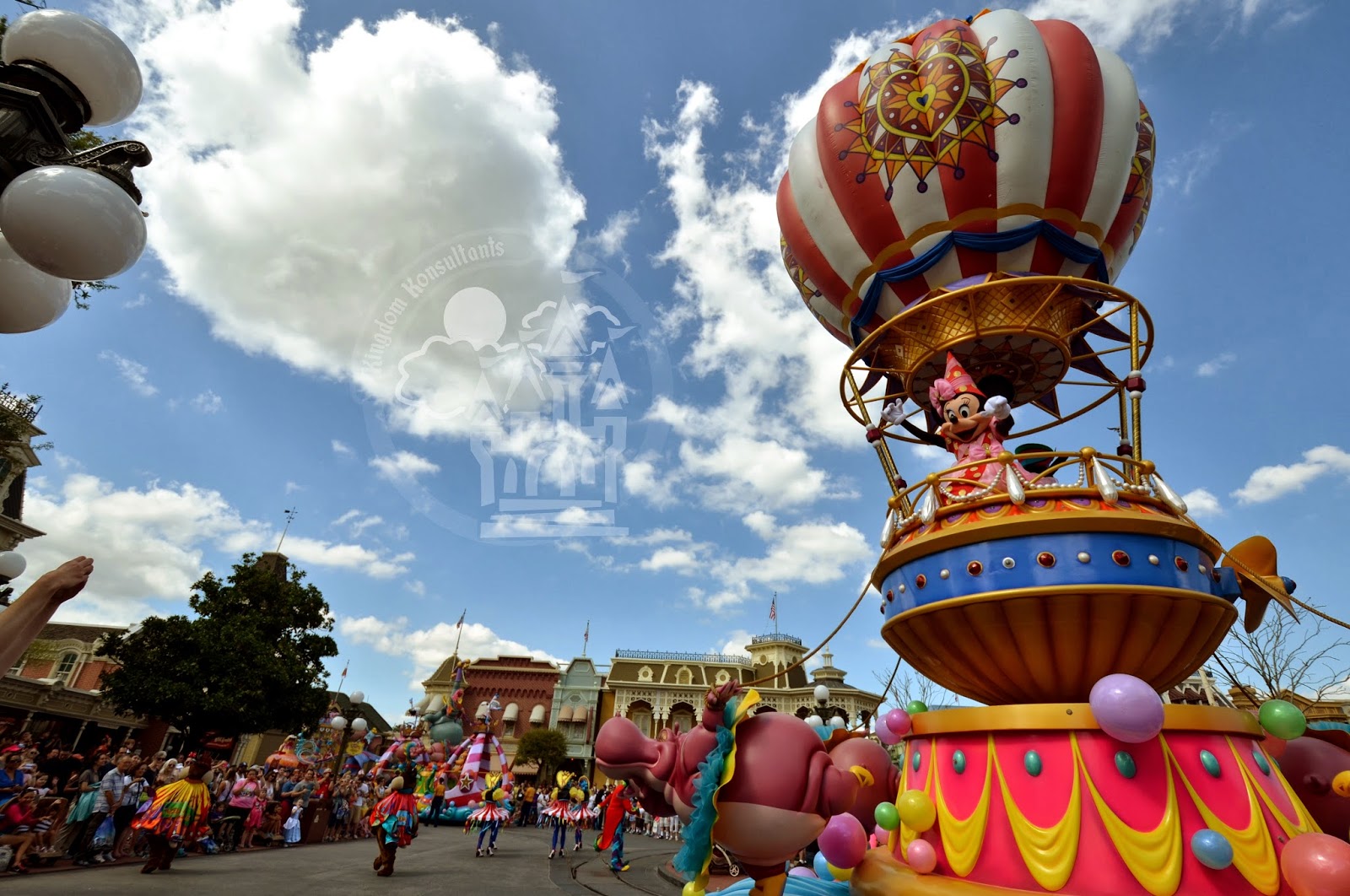 Then entire parade will go by in about 15 minutes, but the memories will last a lifetime (as will the song in your head). As Mickey tells us as he waves goodbye, "This is the BEST Celebration EVER!". I definitely recommend this as one of your "must do's" on your next visit.

Enjoy the rest of the pictures below!  -Carissa 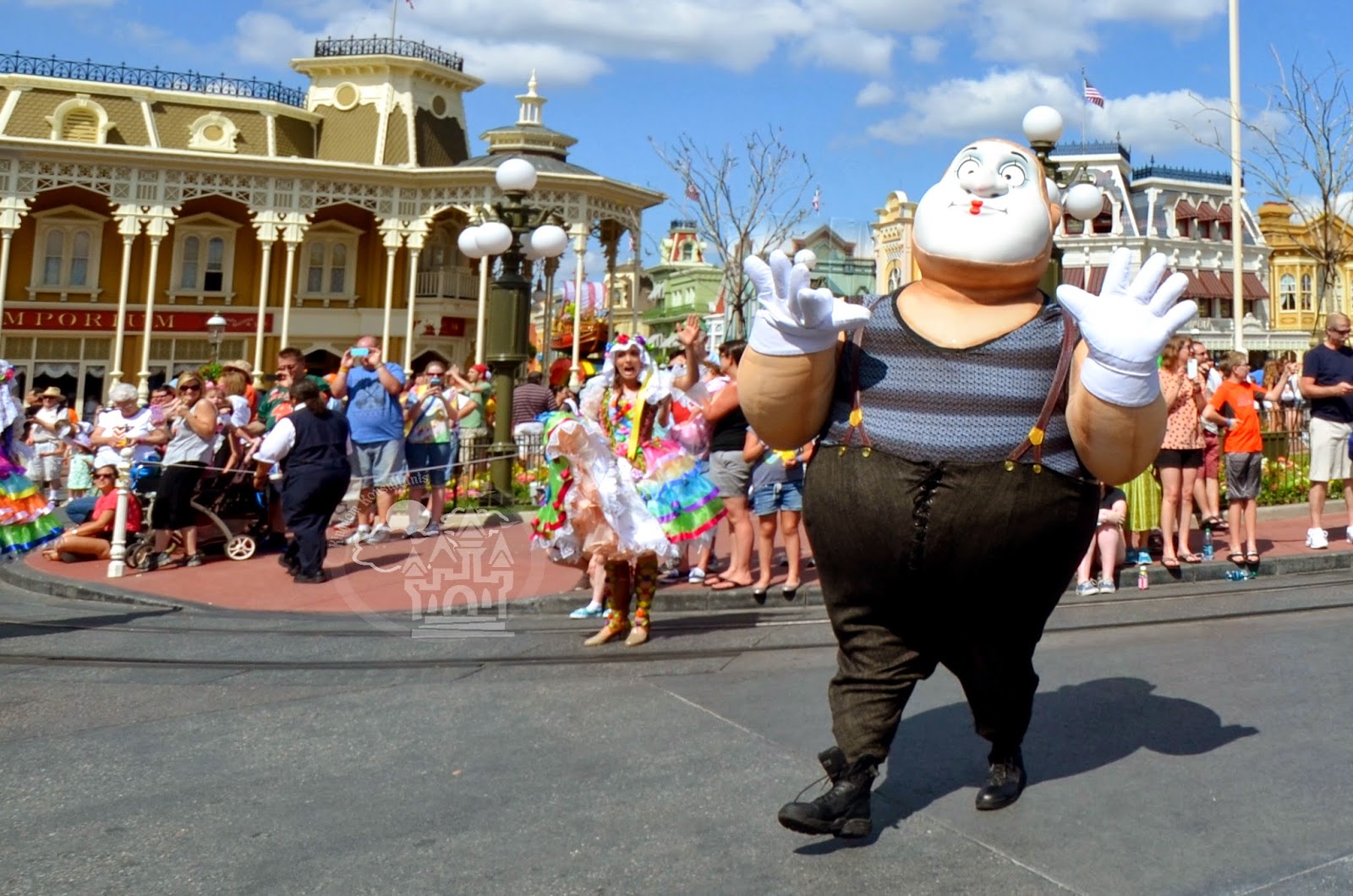 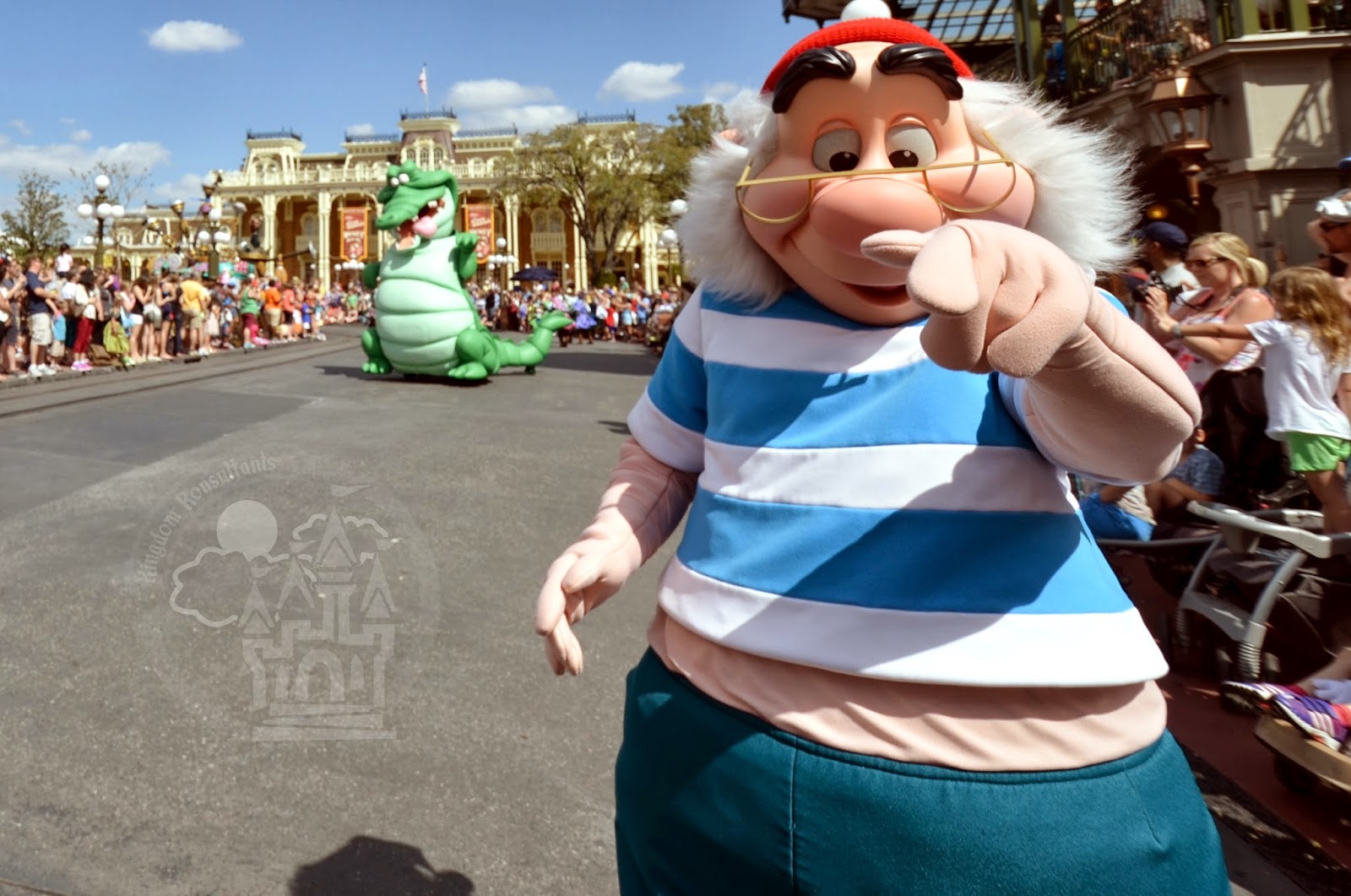 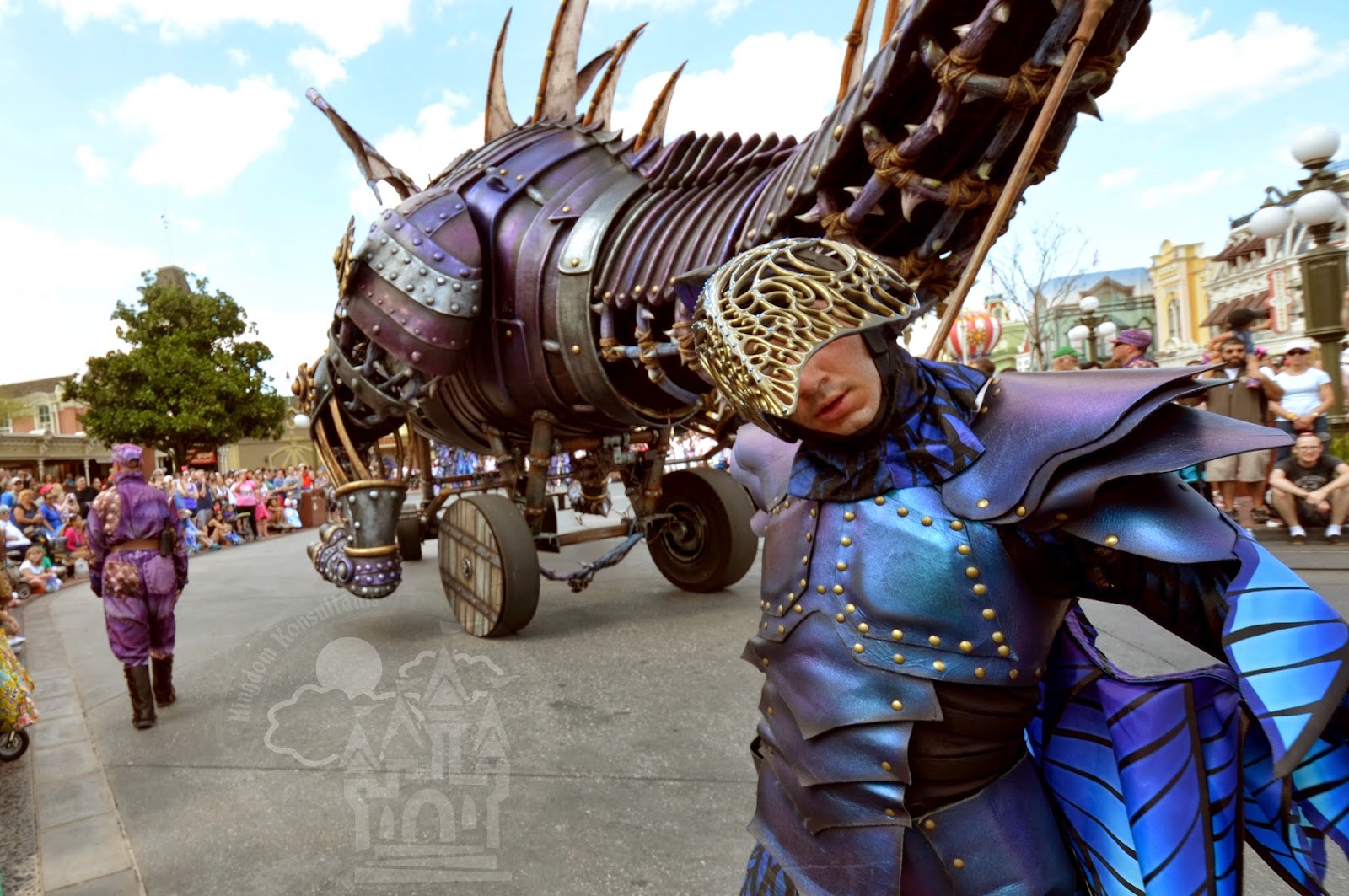 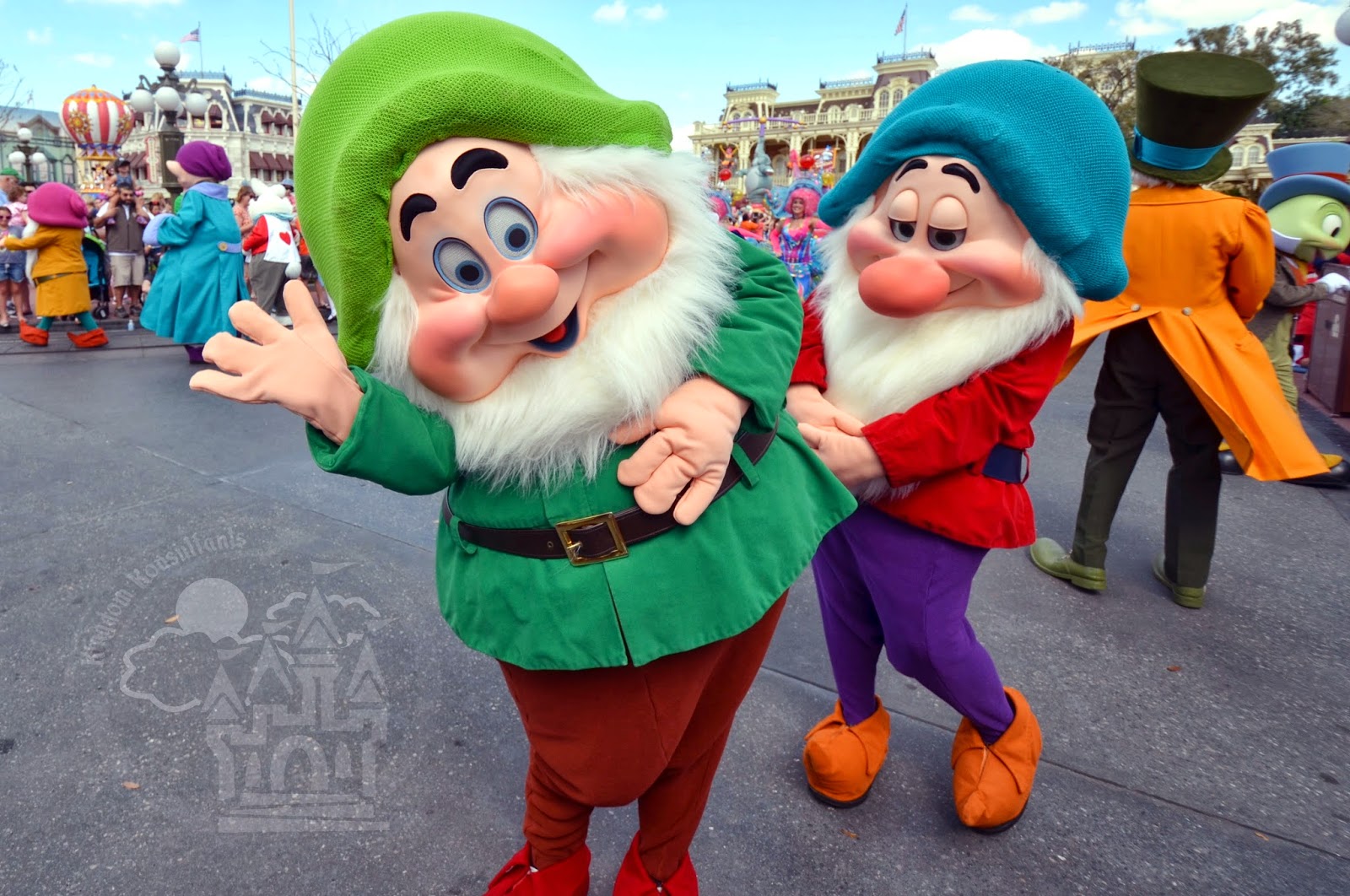 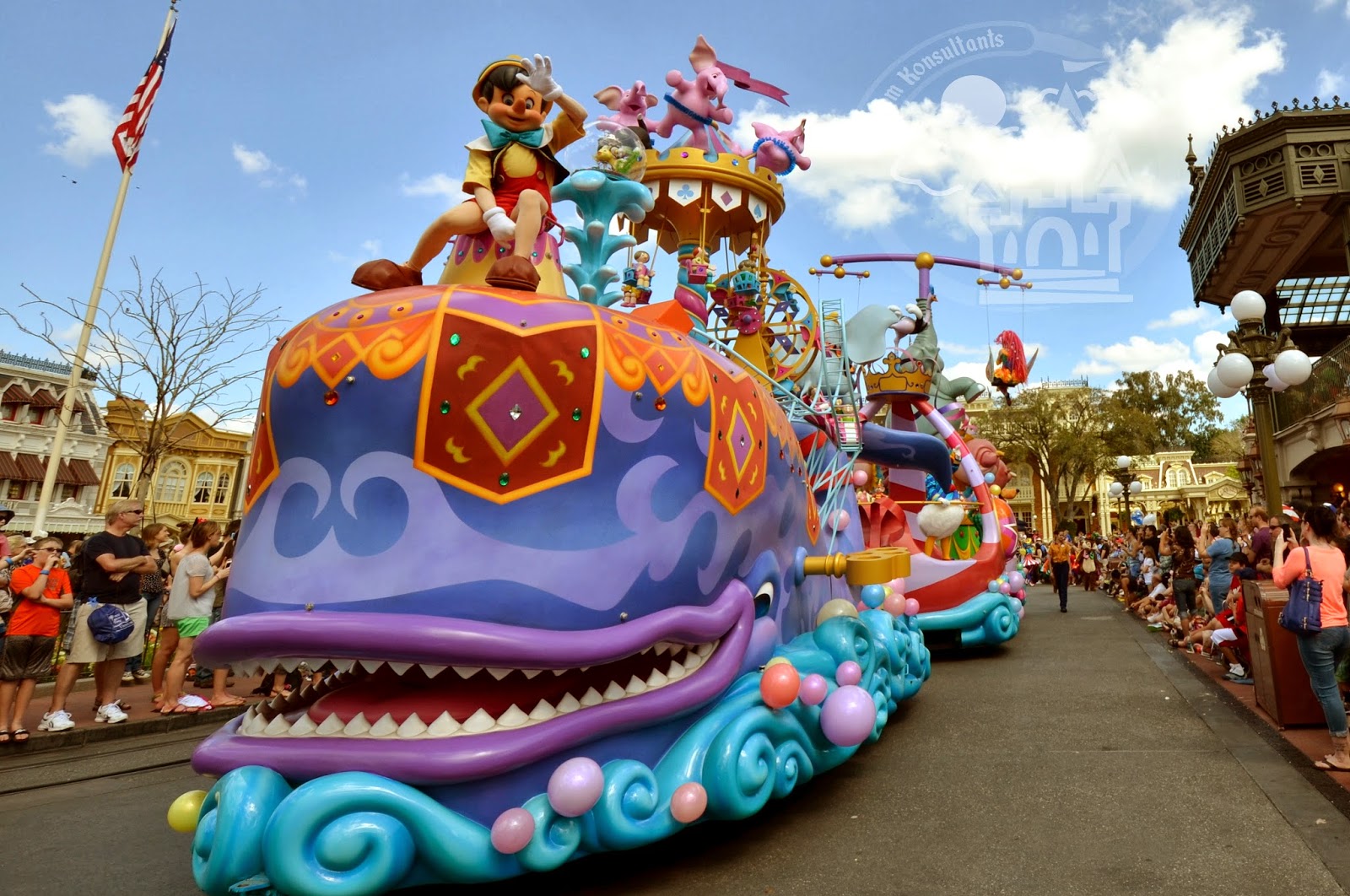 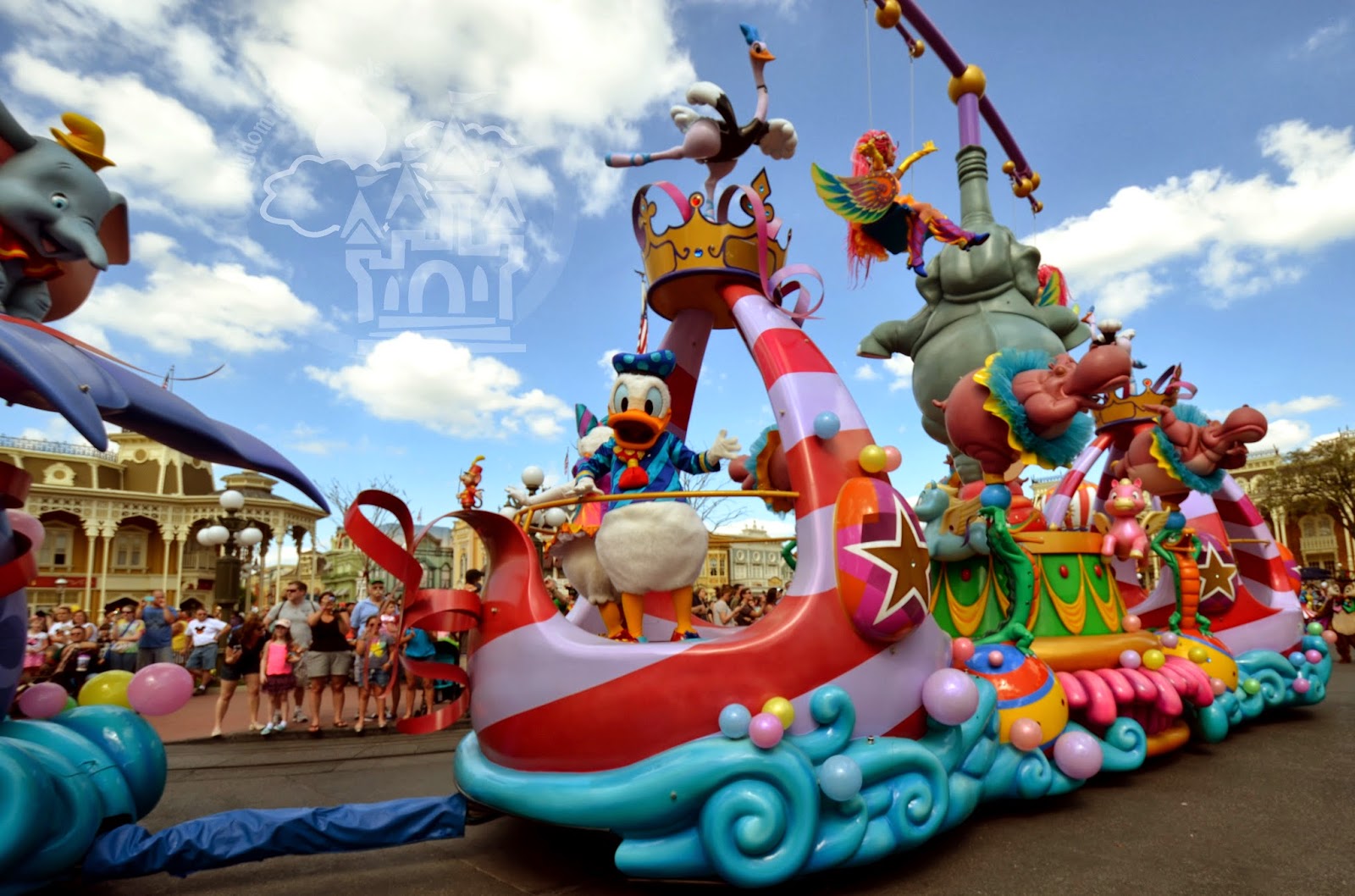 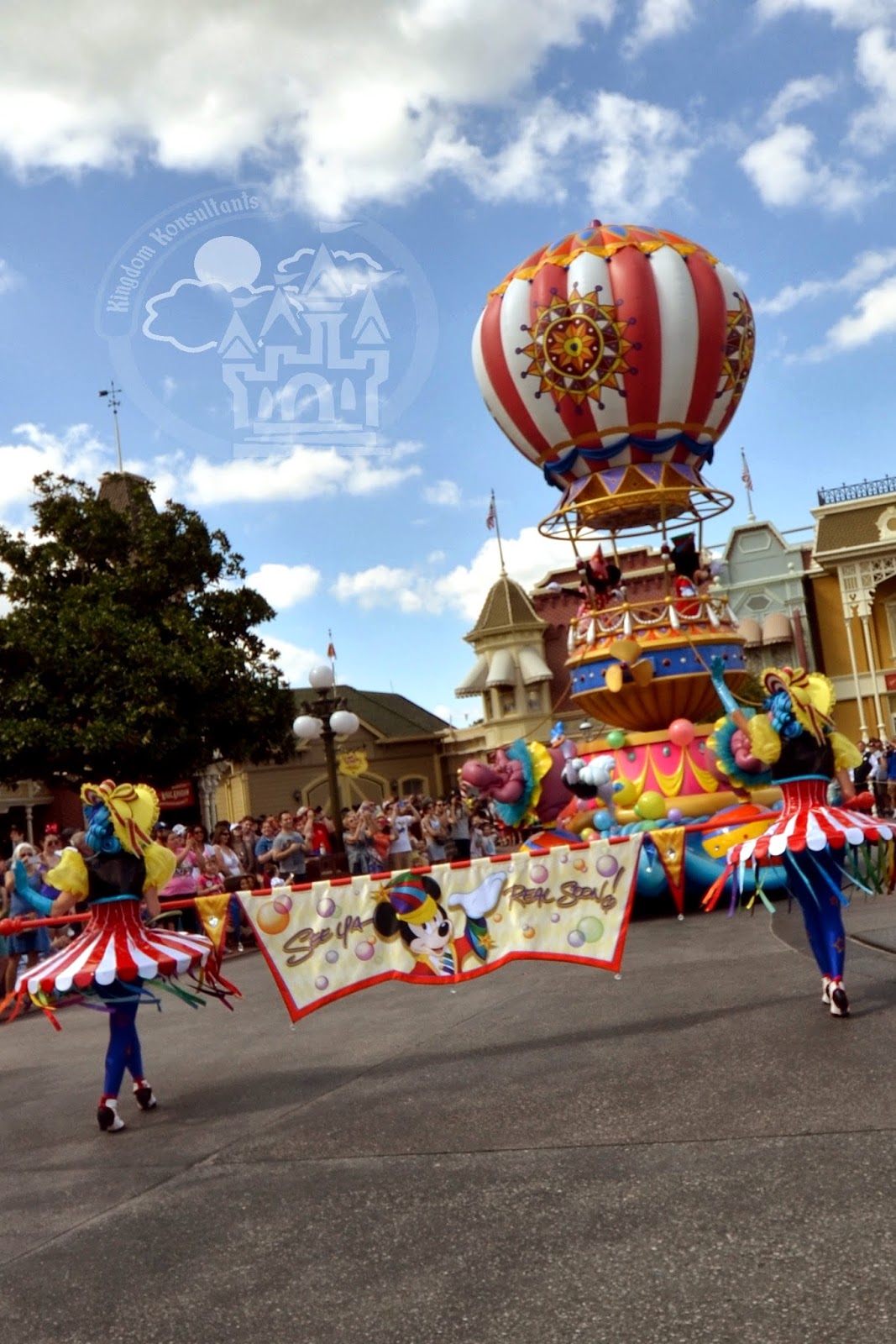 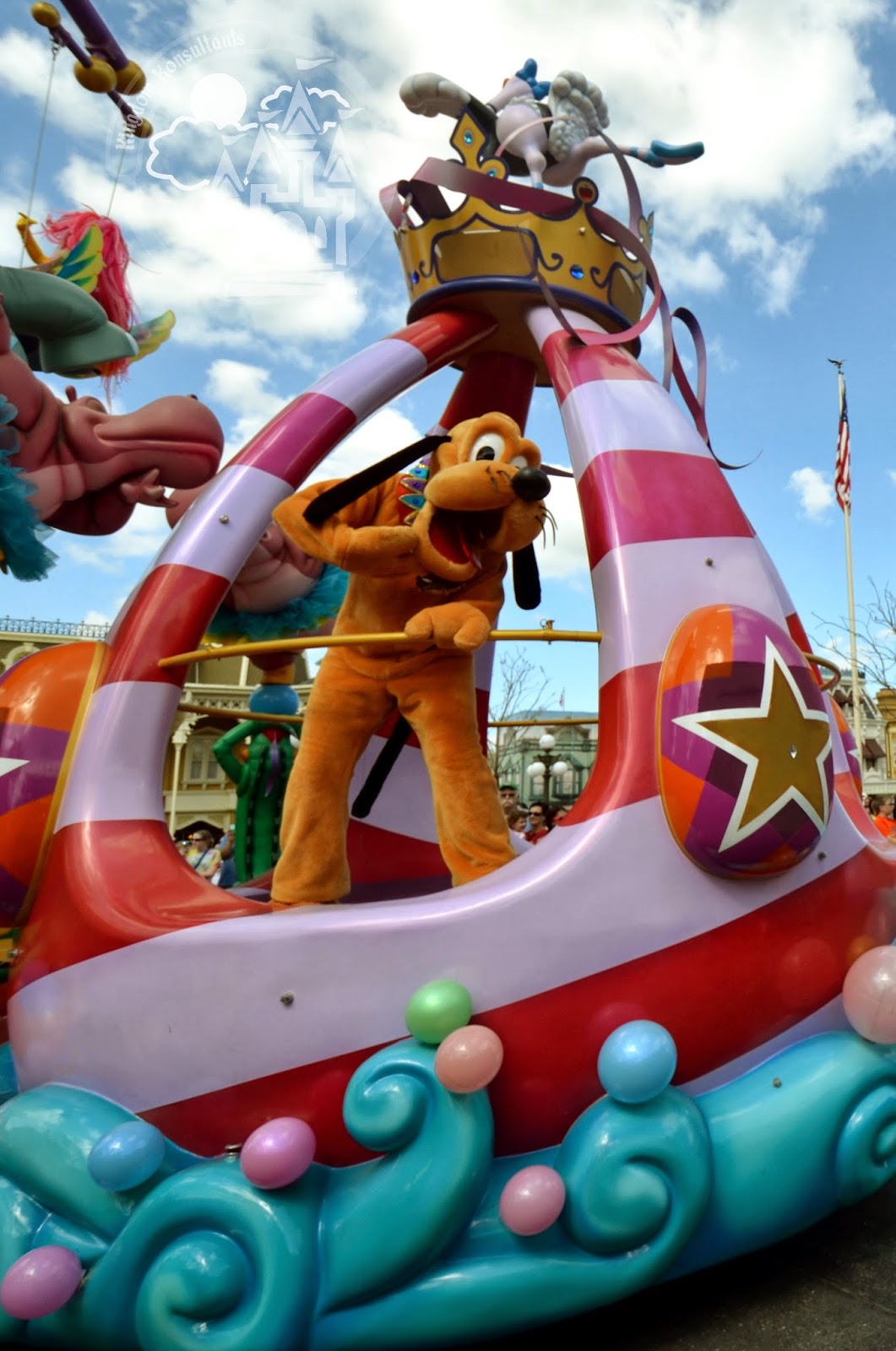