Review: More of Epcot's International Festival of the Arts 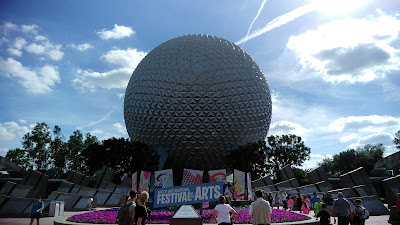 You've almost made it to another weekend! Woo-hoo! And another weekend means another chance to hit up Epcot's newest festival, the International Festival of the Arts! I have already posted a detailed review of my first visit to the festival, on opening week. You can check that out by clicking HERE. This past Monday, I got to go back and try some of the food items that we missed the first time around. 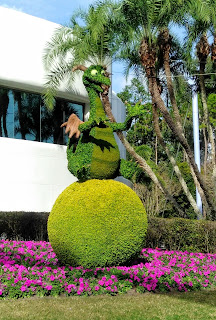 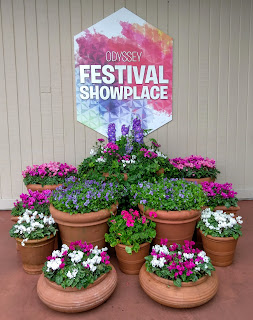 This time, just The Hubs and I escaped for a couple of hours, while the kids were at school. (I know, we are super spoiled to have the luxury of doing this.) Since we had experienced horrible storms and even tornado warnings the night before, it was still pretty cool and windy out, so the park wasn't overwhelmingly busy. I mean, for a Monday it was hopping, but not nearly as bad as it had been on opening day. First we headed toward the Festival Showplace, in the Odyssey building, since we missed it completely last time. Inside, we saw a workshop taking place. This one happened to be about cake decorating and it was being hosted by the bakers from Amorette's Patisserie in Disney Springs. The Guests that were participating seemed to be having a lot of fun, creating their own painted cakes. 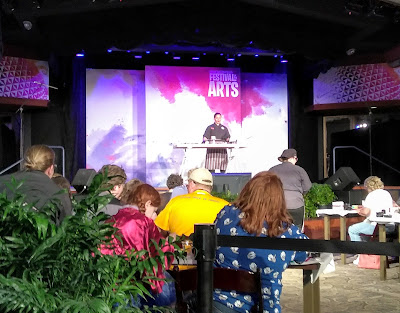 Also in the Odyssey building there are a couple of art galleries, including one featuring the work of famed Disney and "It's a Small World" artist, Mary Blair. 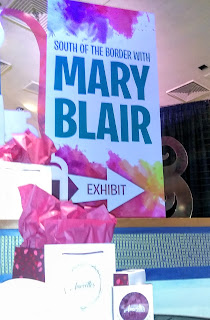 Of course, the most popular area in the building was the food booth area, The Painter's Palate. Here is the menu for you to check out: 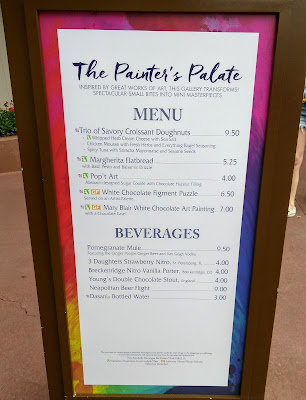 Let's dive right into some reviews:

We also took a second whack at the E=AT2 booth, to try a couple of the items that we missed previously. Here's the full menu again: 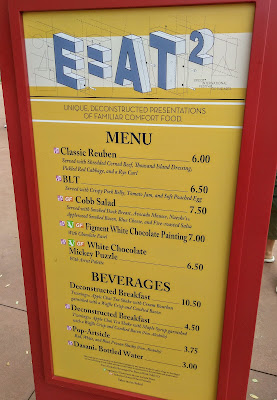 And here's the reviews: 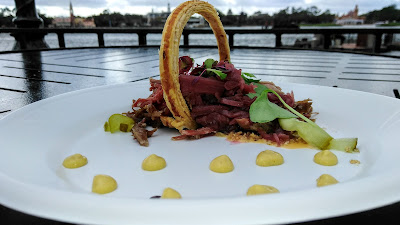 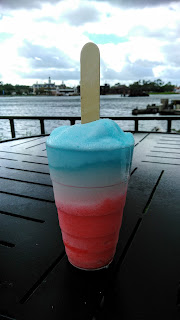 And while we were at it, we were right next to the Artista Hambriento booth in Mexico, so we tried something from there too! Here's a reminder of the menu: 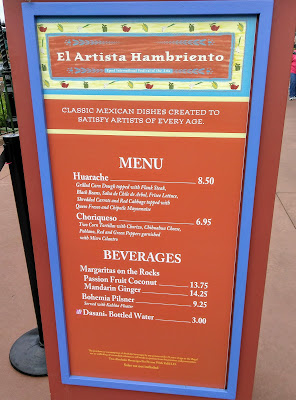 Uh...too much food, too quickly. Time to walk a bit. We headed past Mexico, and caught an artist working on a sketch in Norway. Kinda cool to see artists around the park. 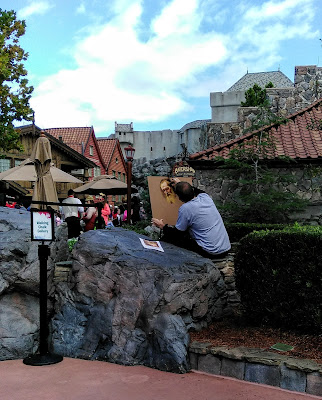 By the time we got around to Italy, we had managed to work up our appetites again, so we tried out the Cuisine Classique booth, which was closed the last time we attended the festival. Here's the menu: 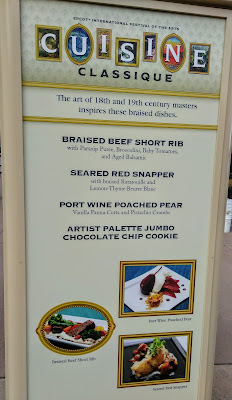 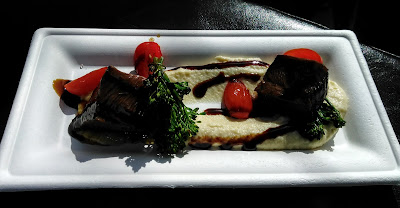 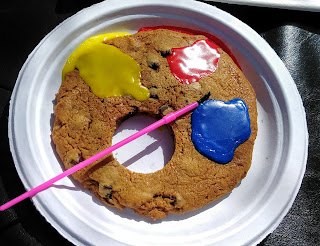 We roamed more of World Showcase, checking out the art tents along the way. We did see a chalk artist in Canada, with many Guests around her, checking out her work and interacting with her. 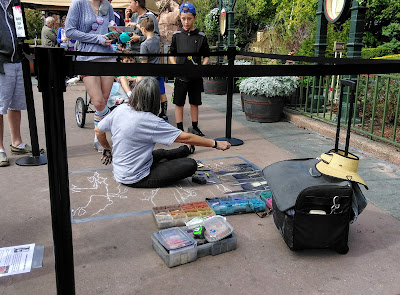 The wall mural that we contributed to last week is coming along nicely, and it was cool to see a more finished product. 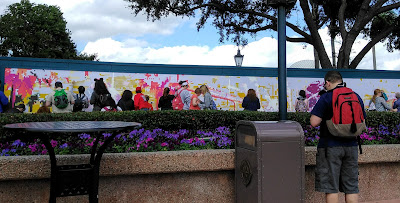 When we came upon the Decadent Delights booth, even though I really wanted to do the Purple Sweet Potato Pie again, we hadn't tried the Caramel Chocolate Mousse Bar, so we went with that. Here's the full menu: 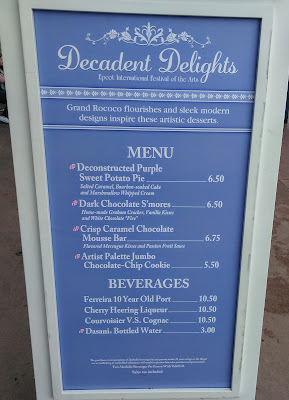 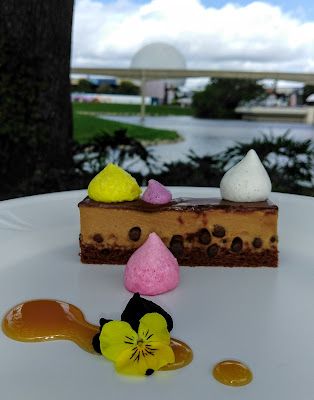 At this point, we were full and had pretty much covered everything that we had missed that we wanted to see, so we started heading out of the park. On the way, we passed a beautiful mural in Future World that was being painted by artists. 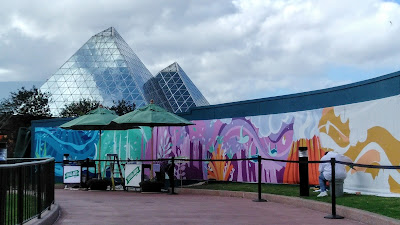 We also noticed that the front topiary had been added to since our last visit.

Looking good! Though we were done for the day, The Hubs went back to Epcot later in the evening, with our little dude, to check out the Broadway concert. (D had homework, so we stayed home.) They saw Ashley Brown, the original Mary Poppins on Broadway, and Josh Strickland, Tarzan from Broadway. The Hubs said both performers were great and they sang a variety of Disney showtunes.

So, overall, it was another awesome day at Festival of the Arts. The Guests seem to really be enjoying the event and the food is being buzzed about all over Disney chat rooms. If you get the chance to check it out, do so, and if you don't, keep in mind that Flower and Garden Festival is right around the corner, (March 1st-May 29th), and if you miss that too, Food and Wine will be back this fall, (Aug. 31st-Nov. 13th).

Want help planning a trip to check out one of Epcot's many festivals? Connect with the agents at Kingdom Konsultant Travel. They'll be happy to help make your festival visit as festive and fabulous as possible!

That's all for this week, folks. I'm gonna need to take a break from those food booths for a while now. Ooof. I'm stuffed just thinking about 'em! See ya next Thursday!