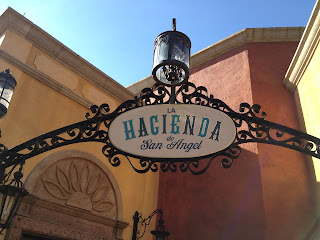 I’m always on the lookout for a new, favorite restaurant in Walt Disney World.  On each trip I like to try at least one new restaurant to see if it could be that new favorite that gets added to my “Must Do” or, should I say “Must Eat” list.  On a trip in February 2012, my husband and I decided to give La Hacienda de San Angel a try and boy, are we glad we did!
I love Mexican food, especially chips and salsa, so I’m always eager and a little apprehensive before trying a Mexican restaurant.  I know a good salsa when I eat one and La Hacienda’s salsas did not disappoint!  The menu doesn’t have your traditional selections that you may find at a local Mexican restaurant so it can be a little intimidating at first.

A great way to start off your meal is with a Margarita!  The Classic Margarita is great but if you’re feeling adventurous, give the Avocado Margarita a try.  It sounds a little crazy and I was hesitant to try it at first too, but trust me, it’s delicious!  There are also Mango Blueberry, Rosita, Lime Raspberry, and Orange Mango Margaritas to try.
Since my first visit, I’ve eaten at La Hacienda on three separate occasions and had a chance to try a variety of items from the menu.   One of my favorite items on the menu is the Taquiza appetizer.  It’s a trio of tacos: one beef, one chicken and one marinated pork.  Each taco is very flavorful!  Although it’s an appetizer, the portion size is large enough to serve as your main dish (especially if you have been filling up on chips and salsa!)
Another great appetizer is the Queso Fundido.  It’s melted cheese with poblano peppers, chorizo and flour tortillas. It’s hard to go wrong with cheese!
I haven’t tried all of the entrees, but I wasn’t as impressed with the entrees as I was with the appetizers.  The appetizers were a tough act to follow.  I would categorize the entrees as good but nothing was a major standout to me.  Luckily, I still had those chips and salsa!

Desserts were another highlight of the meal.  The Empanada de Manzana is fantastic!  It’s a puff pastry filled with sautéed caramel apples and served with dulce de leche ice cream and caramel sauce.  The nice thing about this dessert is that it’s not too heavy so you can still eat it after having an appetizer, entrée and yes, lots of chips and salsa.  Another standout dessert was the Nieves, which are traditional Mexican sorbets.  The flavors were really great and it was light and refreshing after a big meal.  If you are in the mood for something really different, try the Helado de Maiz.  It’s corn ice cream served with caramel corn popcorn.  It wasn’t good but we couldn’t stop trying it because it was just so… strange.

A great feature of La Hacienda de San Angel is the optimal viewing location for IllumiNations: Reflections of Earth.  The restaurant juts out into World Showcase lagoon so you really can’t get a much closer viewing location.  With tall windows overlooking the lagoon, there are plenty of tables with decent views of the fireworks.  At show time, the lights in the restaurant dim and the IllumiNations music is piped in to the restaurant to really immerse you in the show.
One downside to the restaurant is it’s only open for dinner.  As with most table service restaurants in Walt Disney World, it is recommended that you make advanced reservations.  Reservations can be made up to 180 days before your trip.
If you haven’t eaten at La Hacienda de San Angel yet, I suggest giving it a try on your next trip!  It’s a great choice for anyone who loves Mexican food, margaritas and a good viewing spot for IllumiNations.  Salud!