Sci-Fi Dine-In Theater: One Out of this World Restaurant 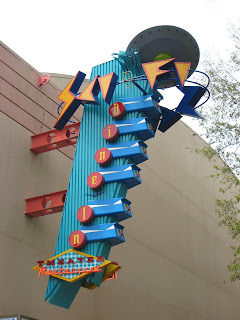 Everyone has that one attraction, resort or restaurant that brings back fond memories of childhood vacations to Walt Disney World.  For me, the Sci-Fi Dine-In Theater does just that.  I have such wonderful memories of this restaurant that it continues to be on my Must Eat list.  I promise that my feelings of nostalgia for this restaurant will only slightly influence my review.

One of the most appealing attributes of the Sci-Fi Dine-In Theater is its theme.  The atmosphere in the restaurant is nothing short of amazing.  As soon as you are taken to your table, you are transported to another era; the 1950s.  Perhaps the neatest part of your table is that it isn’t just a table, it’s a car!  Take a step back in time to a 1950s Drive-In Movie Theater, complete with cars and concession stand.  Dine under the stars as you watch old Sci-Fi movie clips on the big screen. 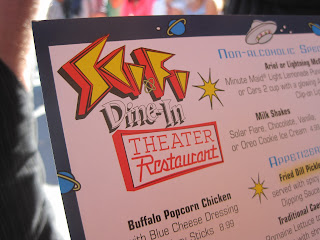 There is no doubt that the food at Sci-Fi takes a back seat to the theme but that’s not to say that you can’t have a great meal at this restaurant.  On a recent trip, my family and I had a fabulous meal with some real standout items on the menu.  The restaurant is open for lunch and dinner and, as with most table service restaurants in Walt Disney World, it is recommended that you make advanced reservations.  Reservations can be made up to 180 days before your trip.


For appetizers, the big hit was the chicken wings with honey-chipotle barbeque sauce.  My husband still talks about those wings!  Never underestimate the power of a really good chicken wing.  Some other favorite appetizers were the buffalo popcorn chicken and the onion rings.  It’s hard to resist the simple, yet deliciousness of an onion ring.

Entrees consist of American classics like the burger, ribs, turkey sandwich and the Reuben.  I order the burger just about every time I go, and while it’s good, it’s nothing to write home about.  It’s a typical burger and that’s fine with me as I enjoy typical burgers.  One of the surprise favorites was the shrimp pasta.  We thought we were taking a risk when we ordered it but it proved to be a solid choice.  It was delicious and the serving size was huge!

It’s not a trip to Sci-Fi without a little dessert!  The peanut butter chocolate cake is a constant favorite of my family’s and it is rare if the plate isn’t wiped clean.  And if you didn’t get a milk shake to go with your meal, dessert if a perfect time to try a chocolate, vanilla, solar flare or Oreo cookie ice cream milk shake. 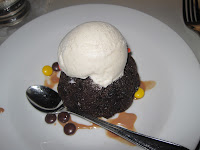 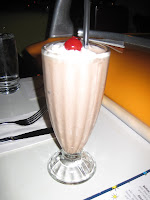 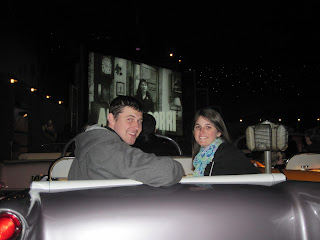 If you’ve never eaten at the Sci-Fi Dine-In Theater, I say give it a try at least once!  Although the food isn’t anything spectacular, except for the chicken wings (you musn’t forget the chicken wings!), the theme and décor is Disney magic at its finest.  So “let’s all go to the lobby to get ourselves a treat.”

June 05, 2021
Ears the News Brought to you by our friends at WDWMagic.com Disney begins construction on 'Journey of Water Inspired by Moana' at EPCOT A new project is happening at EPCOT.  The construction of the 'Journey of Water Inspired by Moana' has begun at the Disney World Theme Park.   According to Disney, this first-ever attraction based on the Walt Disney Animation Studios hit film, "Moana," will let guests interact with magical, living water in a beautiful and inspiring setting.  Photo courtesy of WDWMagic.com Disney announces pricing and more details for the upcoming 'Disney After Hours Boob Bash' Halloween event Disney announced pricing, booking dates and more details of entertainment offering for the upcoming 'Disney After Hours Boo Bash' at Walt Disney World's Magic Kingdom.  Pricing begins at $129-$139 plus tax for August/September nights and $159-$169 plus tax for October nights, and $199 plus tax for Halloween.  Annual Passholders and Di
Post a Comment
Read more