Tickets ranging from 1 to 10 days can be purchased, including the option to add park hopping. Each purchase can be assigned to Family and Friends defined in My Disney Experience, and the tickets are automatically linked. FastPass+ privileges are also automatically assigned at the time of purchase, making the app purchasing of tickets as streamlined as possible.
The iOS edition also receives other improvements in v2.5, including improved wait time accuracy and time stamps to indicate when various information was last updated.
The new apps are available for both iOS and Android, and are available for download now via the normal update system on each mobile platform.

Speaking to Variety co-editor-in-chief Claudia Eller at a Dealmakers Breakfast earlier this week, Bog Iger gave us some insight as to what to expect in one of the new attractions Avatar expansion. Iger said, "It felt so real, so lifelike. There’s never been anything like it."
The vessels that guests will ride upon will essentially be the banshees themselves, with bodies that move to mimic a breathing beast. The flying sequences will be brought to life through large video screens — similar to “Soarin'” — with vehicles moving with the 3D action inside a massive theater.
The entire article can be found here

Tusker House at Disney's Animal Kingdom will begin offering character dinners from March of next year. Beginning March 8 2015, character dinner will be offered in addition to the character breakfast and lunch, which will make the restaurant character dining only.
Reservations can be made from December 18 2014 for arrivals from March 8 2015 onwards.
Donald's Safari Dinner will continue to be a buffet, including meet and greets with Donald and Daisy Duck. Dinner will begin at 4:00 PM.
Tusker House has undergone a number of changes since its opening with the park, where it was originally a quick service restaurant. It later changed to a table service restaurant, with gradual inclusion of character dining, first at breakfast, then later adding lunch.

A new table service restaurant will open on Discovery Island in 2015, which along with Yak and Yeti and Rainforest Cafe, will provide three non-character dining experiences.

Disney has today released some new concept art showing the new Disney Vacation Club development - Disney’s Polynesian Villas and Bungalows.
The first piece of art gives us a look at what the completed lagoon bungalows will look like. Described by Disney as "sleeping up to eight guests each in a home-like setting reminiscent of the South Pacific" 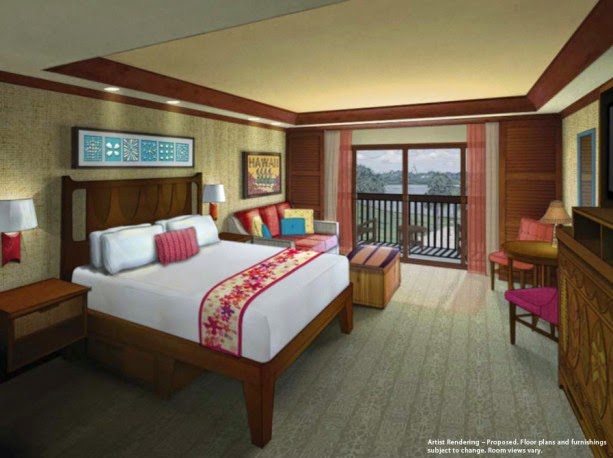 The second piece of art shows the interior of one of the Deluxe Studio rooms that will be found inside the longhouses. The 360 Deluxe Studios will sleep up to five guests each and have the ability to connect to another Deluxe Studio. The rooms will each have a bathroom separated into two areas, one with a shower and sink and the other with a sink
and tub/shower. They also will have kitchenettes and enhanced storage space.

The project will open in phases, with the first part opening in 2015. Disney is also expanding the pool deck area, reworking the lobby, and adding Trader Sam's Grog Grotto as part of an overhaul of Disney's Polynesian Village Resort.