February 20, 2015
The Big Thunder Mountain Railroad refurbishment has been pushed back to April. Originally scheduled to begin on March 4 through to March 7, it is now scheduled for April 27 – 30.

Disney's Winter Summerland mini-golf reopened to guests on February 18 2015, after completing its refurbishment early. The mini-golf course located next to the Blizzard Beach water park was expected to be closed through until March 2015.

Construction walls are now up inside the Space Mountain gift store, with the former arcade area completely walled off along the entire length of the store. The phone charger outlets remain accessible, along with the massage chairs and the photo booth kiosks.
Disney has also filed construction permits for the area, although there are no details on what the space will be used for.

Disney is now in the process of rolling out a new 'Direct-to-Room' capability for guests arriving at Walt Disney World Resort hotels.

Expected to be available from February 25 2015

Disney has confirmed that 'Symphony in the Stars' Fireworks will once again return as the nightly finale, along with the 'Summon the Force' pre-show to the fireworks featuring character appearances. 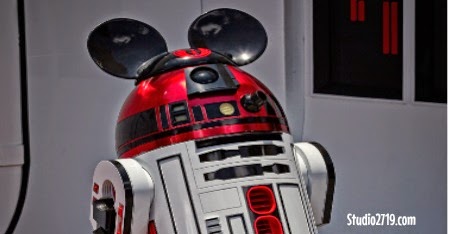 James Arnold Taylor will be back as the host for each weekend, and Darth's Mall merchandise will be in a new location near to the Streets of America at the 'Final Take Terminal.' The former merchandise location in Soundstage 1 is being converted into additional capacity for Toy Story Mania so is unavailable.

Perhaps the biggest change this year will be the relocation of the celebrity shows from the Premiere Theater to the Theater of the Stars - home of Beauty and the Beast on Sunset Blvd.

The Premiere Theater is currently hosting the Frozen Sing-Along, and although that will ultimately be moved to the ABC Theater at the former home of American Idol, the Premiere Theater will not be available during Star Wars Weekends. Beauty and the Beast will continue to be performed in the mornings, with a quick turn-around into a Star Wars set for the afternoons each weekend. Theater of the Stars has more capacity, but unfortunately lacks the air conditioning of the Premiere Theater.

There is still currently no information regarding the celebrity guest list.

The dates for the 2015 Star Wars Weekends are: