March 13, 2015
The Walt Disney World Monorail Express beam will be operating on a reduced schedule through to the summer of 2015. On Tuesdays and Wednesdays, from 11:30 AM to 6:00 PM, the Express beam will be closed for maintenance. During that time, the Resort and Epcot beams will continue to operate as normal. Watercraft and busses will also be operating throughout the closures. The revised schedule begins on March 10 2015.


The quiet pool at Disney's Polynesian Village Resort will be closing for a major refurbishment in April. The exact dates are not available, but it is expected that the pool will close in mid April 2015 through to early January 2016. The resort's main feature pool will open prior to the closure of the quiet pool, and will bring a new pool deck, hot tub, and kids play area when it opens in April 2015.

﻿﻿Walt Disney World Resort will kick off the “Coolest Summer Ever” with a 24 hour special event May 22-23 at the Magic Kingdom, hosted by Olaf from Disney’s blockbuster animated hit “Frozen.”

﻿﻿﻿﻿﻿﻿﻿
The Magic Kingdom will be open 24 hours to guests from 6am to 6am, Friday, May 22 to Saturday, May 23, 2015. Guests are invited to come in costume to show their Disney Side while a selection of favorite attractions, entertainment, special event merchandise, plus food and beverage are on tap all night long to celebrate the start of the “Coolest Summer Ever” at Walt Disney World Resort.


Highlights of "Coolest Summer Ever":

Frozen Fun – “Frozen” Summer Fun LIVE will bring together Princess Anna, Queen Elsa, Kristoff and Olaf with citizens of Arendelle, all appearing daily in shows and experiences at Disney’s Hollywood Studios, June 17-Sept. 7. Guests will find cool thrills this summer including a royal processional, a sing-along show, Frozen-themed treats and merchandise, plus a Frozen fireworks display above Hollywood Blvd.

New Restaurants and Shopping – Throughout the summer, new waterfront dining and boutique shops flow into the Downtown Disney shopping/dining/entertainment district as its transformation into Disney Springs continues.

A Splash at Water Parks – A cool new deal doubles the fun at Disney’s two iconic water parks – Disney’s Typhoon Lagoon and Disney’s Blizzard Beach. Purchase a one-day water park ticket and park-hop between the two water parks in the same day that both are open.

Check out this video from Disney Parks Blog

Disney confirms the return of Frozen Summer Fun LIVE at Disney's Hollywood Studios for 2015. The dates are June 17 through to September 7 2015, with the royal processional and hugely popular fireworks joining the now permanent Frozen sing-along show. 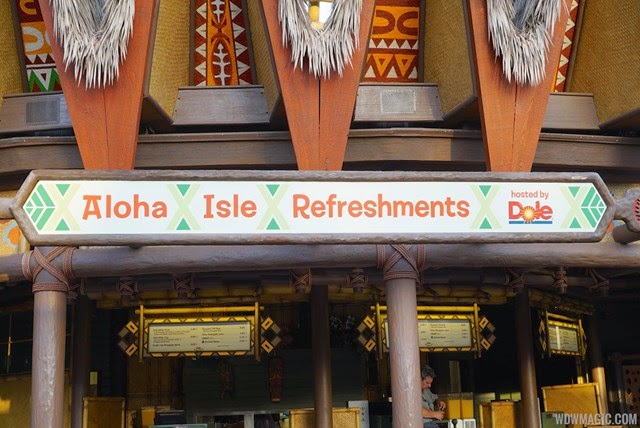 
The relocation should help with the congestion problem commonly occurring around Aloha Isle’s old location across from The Swiss Family Robinson Tree House.

Image courtesy our friends at WDWMagic.com. For more pictures, check out the galleries for Aloha Isle and Sunshine Tree Terrace.