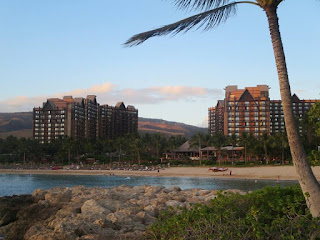 I recently enjoyed 10 wonderful days at Aulani.  That sounds like plenty of time to experience the resort as well as see the sights of Oahu, Hawaii, right?  But it turns out that Aulani is like Hotel California; you can enter but you don’t want to ever leave!

Upon first arriving, you’re presented with leis: flowers for the girls, kukua nut leis for the boys.   (Lucky them, theirs last longer than the flowers! But they certainly don’t smell as nice!)

The resort itself is impressive as you drive up.  It's sandwiched in between 2 other very modern looking resorts but is recognizable right away.  Aulani has that distinctive feel that only Disney resorts have.  The theming and architecture really help you feel that you’re in an authentic Hawaiian resort, rather than a high-rise apartment building in a metropolitan city.

If you're familiar with deluxe resorts at other Disney destinations, you know that their lobbies always make a grand first impression.  Aulani's does not disappoint.  Upon entering, you can see straight through the lobby to take in the expansive resort below, as well as breathtaking views of the beach and ocean beyond.  A mural wraps around high above the lobby, showcasing the heritage of Hawaii.  On one side, the mural shows the mountains of Hawaii, which blends seamlessly with the view of the real mountainsides of Oahu through the lobby entryway.  In the same way, the other side of the mural showcases modern Hawaii with images of the ocean, leading out to the actual ocean beyond the beach.  It all adds up to a very immersive, breathtaking experience.  I could spend hours sitting in the lobby at Aulani!  The doors all slide open so at any time there are fresh breezes blowing through.  At nighttime it is very relaxing to sit there on the comfy couches. 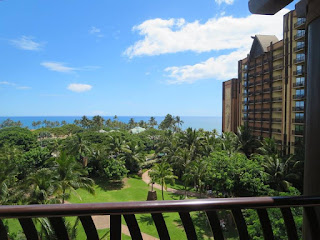 There are two towers at Aulani: the Ewa Tower and the Waia’nae Tower.  There are 359 hotel rooms, 16 suites, and 460 Disney Villas.  The lobby connects the two towers, and depending on which tower you stay in, there are beautiful views of the ocean, of the mountains, or of the valley below with the pools.

We had a one bedroom villa in the Ewa tower, facing the ocean.  It was relaxing to sit on our balcony and see catamarans, sailboats and other ships in the distance.  I loved having lots of green foliage as well.  I especially loved our location, as our room overlooked the Haniwai Lawn where the Starlight Hui is performed, as well as numerous wedding receptions and character encounters.

Aulani is an expansive property, and it took us a bit of time to get used to the layout.  But after a day or two, we had the terrain down!  We quickly discovered the meandering paths leading to the Ulu Café, where we ate breakfast every morning. 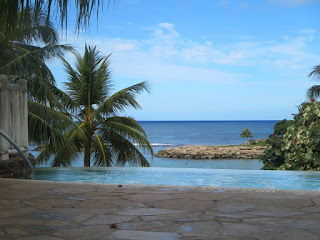 Our day typically began by finding lounge chairs together, putting our stuff down and going to eat.  Aulani has a smart policy for reserving chairs.  Guests put towels and other belongings down on a chair to “reserve” it.  If the cast members come around and notice nothing has been moved in a while, they fold the towel and put it over the back of the chair.  If after an hour the towel is still folded, they remove it to free up the chair for someone else.  Someone in our party usually made a point of going back to our chairs to make sure we used them throughout the day.  The same policy is used on the beach.

I fell in love with Aulani, and quickly understood why Travel and Leisure named it the 2014 Top Hotel for Families in the United States.  The property is beautiful to walk, there are plenty of swim areas and relaxation spots, and it never feels crowded.  We bounced around between the infinity pool, the main pool, water slides, the lazy river and the beach.  All pools were at a perfect temperature for just walking or jumping into, while still being very refreshing!  We found it to be the same with the beach: temperature was perfect, and the water was so clear.  The lagoon is man-made and designed to keep waves at a minimum, so it’s perfect for little kids.  Very little sea life gets in – only once did I see tiny little fish swimming around at my feet.  The lagoon looks small but the beach was never crowded! 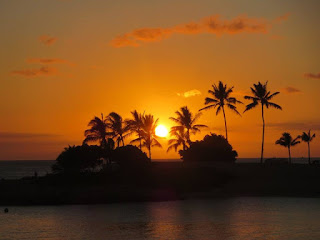 We had excursions planned during our stay, and it was hard to force ourselves off property to go enjoy them.  However, we did leave and there will be more details on those excursions in future blog posts.  We were always happy to come back to Aulani, grab our bathing suits and take a dip in the refreshing waters of any of the pools or beach.

As the perfect end to each of our perfect days at Aulani were magnificent sunsets to enjoy.  No matter where you were on the beach you had a fantastic view of the setting sun!

Stay tuned for future blogs about Aulani.  This agent has decided this is her new vacation destination!