August 20, 2015
Ears the News is brought to you courtesy of our friends at WDWMagic.com

All images are courtesy the Walt Disney Company. 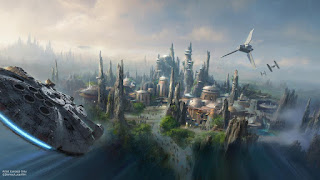 The Walt Disney Company Chairman and CEO Bob Iger announced to an audience of more than 7,500 fans that Star Wars-themed lands will be coming to Disneyland park in Anaheim, Calif., and Disney’s Hollywood Studios at Walt Disney World Resort in Orlando, Fla., allowing Star Wars fans to step into the stories from a galaxy far, far away.

Ambitious plans to bring Star Wars to life in the two parks include creating Disney’s largest single themed land expansions ever at 14 acres each, transporting guests to a never-before-seen planet, a remote trading port and one of the last stops before wild space where Star Wars characters and their stories come to life.

“I am thrilled to announce the next chapter in the long and exciting history between Disney Parks and Star Wars,” said Iger. “We are creating a jaw-dropping new world that represents our largest single themed land expansion ever. These new lands at Disneyland and Walt Disney World will transport guests to a whole new Star Wars planet, including an epic Star Wars adventure that puts you in the middle of a climactic battle between the First Order and the Resistance.” 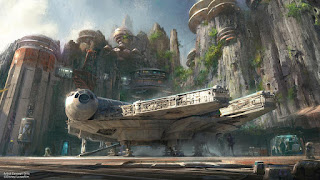 These authentic lands will have two signature attractions. Along with the thrilling battle experience, another attraction puts guests behind the controls of one of the most recognizable ships in the galaxy, the Millennium Falcon, as they take on a customized secret mission.

Iger also shared concept images of the Star Wars-themed lands, giving fans a glimpse at what is to come for Disney parks.

No dates have been given for the start or completion of the project.

Check out this video from WDWMagic (if it doesn't load in your browser, click here)

In addition to the creation of an entire land dedicated to Star Wars, we will also receive a new mission added to Star Tours in the very near future. Later this year, Star Tours at Disney's Hollywood Studios will be updated to feature characters and destinations from the upcoming film, Star Wars:

We can also look forward to a new Star Wars celebration event in early 2016 at both DisneyLand and Disney’s Hollywood Studios.

Season of the Force in DisneyLand will allow guests will explore the Star Wars galaxy with special entertainment, themed food locations and Hyperspace Mountain – a reimagining of the classic Space Mountain attraction in which guests will join an X-wing Starfighter battle.

At Disney’s Hollywood Studios, Season of the Force will feature a new fireworks spectacular set to the iconic score of the Star Wars movies on weekend nights. 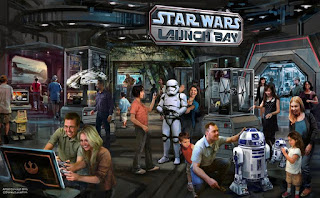 The new experience will be located in the Animation Courtyard at Disney’s Hollywood Studios in the former Animation building. 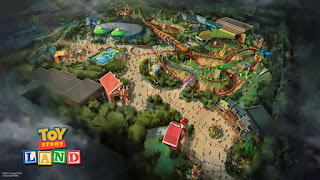 In addition to a massive Star Wars expansion Disney’s Hollywood Studios will also be receiving an 11 acre expansion in the form of Toy Story Land.

This new 11-acre land will transport guests into the adventurous outdoors of Andy’s backyard. Guests will think they’ve been shrunk to the size of Woody and Buzz as they are surrounded by oversized toys that Andy has assembled using his vivid imagination.

Using toys like building blocks, plastic buckets and shovels, and game board pieces, Andy has designed the perfect setting for this land, which will include two new attractions for any Disney park and one expanded favorite - Toy Story Mania.

Two new attractions are part of the expansion which will join the existing Toy Story Mania:

Family-friendly roller coaster – This coaster will zip and zoom, plunge and coast as it takes guests on a thrilling, toy-filled adventure throughout the new land on the back of Slinky Dog.

Alien saucers attraction – The famous little green aliens from the movie will take guests around for a spin in their very own flying saucers. 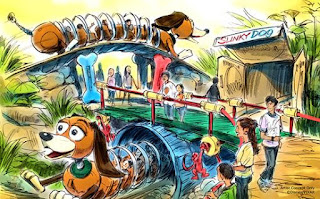 "As all of you know, here in Anaheim, we’ve been quite successful with taking immersive experiences to a whole new level as we did with Cars Land. In fact, one of our favorite stories from opening day is that we overheard a little boy asking his mom, 'Is this where they filmed the Cars movie?'" Imagineer Kathy Mangum said. “That’s exactly how we want people to feel – like they've stepped onto the set of their favorite film … like the quaint town of Radiator Springs or, in the case of 'Toy Story,' the wild and adventurous outdoors of Andy's backyard."

We also got a few more details on the Avatar expansion currently under construction at Disney’s Animal Kingdom.

First we have some names.

The land will officially be called “Pandora: The World of AVATAR” and the E-ticket attraction has been titled “AVATAR Flight of Passage”.

AVATAR Flight of Passage will be a spectacular flying experience that will give guests a birds-eye view of the beauty and grandeur of the world of Pandora on an aerial rite of passage.

It was also confirmed in a presentation by Walt Disney Imagineer, Joe Rhode, that the rumored on again, off again boat ride will be there as well. Very little detail was given about the boat ride attraction other that it will be in a place where it is always night. It is safe to assume that that there will be a considerable amount of bioluminescent animals and foliage.

Check out this video from Inside the Magic (if it doesn't automatically load, click here)

Disney also displayed a travel agent style video that gives us a little insight into the story behind the land. A video from Inside the Magic is below (click here if it does not load)

Over at Magic Kingdom we finally have a name for the Jungle Cruise themed restaurant being built upon the ashes of the long closed AdventureLand Verandah.

It will be called Jungle Navigation Co., Ltd. Skipper Canteen. 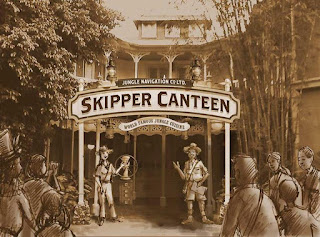 The Skipper Canteen will allow guests to experience “World Famous Jungle Cuisine” in one of several unique dining rooms – including a crew mess hall and a once-hidden secret meeting room of the famed Society of Explorers and Adventurers. The restaurant will also be staffed by Jungle Cruise Skippers, so expect their own unique brand of humor to be served up with each dish.

Both lunch and dinner table service will be inspired by the flavors of Africa, Asia and South America.

The Skipper Canteen is expected to open in late 2015.

The cost is $69 for adults or $39 for children ages 3 to 9, in addition to your party ticket, and includes a reserved viewing location for the Boo-To-You Parade and a Happy Hallo-Wishes dessert party.

This dessert party package looks to be the only premium offering this year, with the more expensive Sinister Soiree appearing to be discontinued.

Sweeten your night with a scary-good premium experience at Mickey's Not-So-Scary Halloween Party!

On select evenings from September 15 through November 1, enjoy Mickey’s “Boo-To-You” Halloween Parade from a special reserved location right on Main Street. Experience fun, frightful floats and kooky-spooky Disney Characters dressed in their Halloween finest—followed by a private dessert party with to-die-for views of the Cinderella Castle fireworks—a super-special way to make the most of the Happy Hallo-Wishes Nighttime Spectacular at Magic Kingdom Park!

At a table draped in black tablecloth with a flickering Jack-O-Lantern, dine on Halloween-themed cupcakes and desserts prepared that same day by our pastry chef, with sweet treats like chocolate-dipped strawberries, chocolate mousse, ice cream and fresh, seasonal fruits and cheeses. Make a toast to the best ghost at your table with sparkling cider or lemonade, hot chocolate, coffee or tea, and then marvel as the sky above explodes with color, music and light!

The Happy HalloWishes Dessert Premium Package costs $69 for adults or $39 for children (ages 3 to 9) which includes tax . A separate Event Party Ticket is also required, and is not included in the price of the package.

Guests who have purchased the Happy HalloWishes Dessert Premium Package may check-in from 4:00 PM to 7:00 PM at the Will Call booth outside the Magic Kingdom park main entrance, where they will receive a credential for identification.

Starting at 7:30 PM, Guests will meet at the parade viewing area located by the flag pole in Town Square (inside the park after you pass under the train station) to see Mickey’s “Boo-to-You” Halloween Parade, which will start at 8:35 PM.