December 18, 2015
Ears the News is brought to you by our friends at WDWMagic.com

No reservations are yet being accepted, although is expected to change in the new year.
The restaurant is open for both lunch and dinner, and perhaps surprisingly and unlike the most 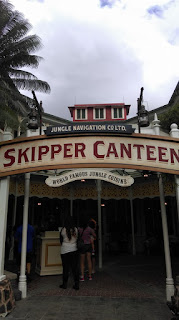 recently opened restaurant, Be Our Guest, the Skipper Canteen does not serve alcohol.

The full menu is below.

Several of the Magic Kingdom's meet and greets have returned to their original locations effective this past weekend.
Princess Tiana is back meeting guests in The Glade behind the Christmas store in Liberty Square. This location has been closed for the past few months during the work on the Jungle Cruise Skipper Canteen.
Over in Fantasyland, Lady Tremaine, the Step Sisters and Fairy Godmother are back to meeting by Cinderella Castle. During the mornings, the location is near to Cinderella's fountain on the west side of the castle, and in the afternoons it moves to the east side of the castle by Sir Mickey's.

Disney has also made a change to the complimentary PhotoPass service at the Disney Visa meet and greet inside Innoventions.
Instead of receiving a free print of one PhotoPass picture, guests will now receive digital downloads of all photos taken during the meet and greet.

Disney has now deployed metal detectors to the park entrances and introduced a new policy
prohibiting toy guns and adult costumes.
Three metal detectors are now in place at the Magic Kingdom alongside the bag check area. A random sampling of guests will be sent through the scanners, which are being operated by a third party security firm, CSC.
A new policy also now states:
Costumes may not be worn by guests ages 14 or older.
Weapons or objects that appear to be weapons, including toy guns, are strictly prohibited.

Disney has also removed from sale toy guns at its retail locations around the Walt Disney World Resort.