Welcome to the latest version of Ears the News


The Christmas Tree Trail at Disney Springs is now open. 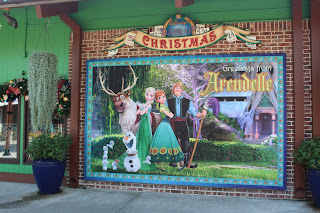 You'll find it tucked away in the Marketplace, using part of the former bus stop area behind Wolfgang Puck Express.

Along with Christmas music and occasional snow flurries, each tree takes on a unique Disney theme, including, Mickey and Minnie Mouse, Disney Villains, Moana, Beauty and the Beast, The Little Mermaid, Cinderella, The Princess and the Frog, Alice in Wonderland, Frozen, The Jungle Book, 101 Dalmatians, and The Muppets.

The Christmas Tree Trail will be open through January 8, 2017.

Black Friday shopping will come to Walt Disney World this year, with most stores at Disney Springs taking part in a two day sale event.

Kicking off the holiday shopping season, Disney Springs will open early on both November 25 and 26, with over 60 stores offering sales and promotions.

Starbucks on the Westside will open at 7:00 AM, and Erin McKenna’s, Wolfgang Puck Express, Ghirardelli, Dockside Margaritas, The Daily Poutine, Marketplace Snacks, and the Disney Food Trucks will open at 8:00 AM.

All stores will open at 8:00 AM on both days, with Disney bus transposition beginning at 7:00 AM.

Some of the deals to be had will include:

APEX by Sunglass Hut and Sunglass Icon: 60% off original prices of select styles

Curl by Sammy Duvall: Save up to 40% on select merchandise and enjoy “gift with purchase” items throughout the store

Lucky Brand: Save 40% off all merchandise, excluding “rare finds”

Savannah Bee Co.: Receive a free jar of Whipped Honey with Passion Fruit with every purchase, while supplies last

Vince Camuto: Save 40% off entire purchase plus additional door busters at 50% off

Volcom: Save 40% off all Volcom-branded merchandise

It isn't just third party retailers offering deals, Disney will sell a Vera Bradley “Midnight with Mickey” hipster bag for $24.99 at Marketplace Co-Op, Storm Trooper Action Figures for $14.99 at Star Wars Galactic Outpost, and a holiday wreath with lights for $16.99 at Disney’s Days of Christmas.

The show makes use of the projectors and lasers installed for Star Wars A Galactic Spectacular, snow fall, rooftop fireworks around the viewing area, and large scale fireworks from behind the park.

Check out the video below or by clicking here to see the very first performance. You can catch Jingle Bell, Jingle BAM! nightly through the end of the year.


Disney has introduced a new limited time special ticket offer, the 4 Park Magic Ticket, which gives guests the chance to experience each park for only $70 per day plus tax.

Holiday Craft Beer has opened in the Odyssey building between World Showcase and Future World, operating most days through December 30, 2016.

Along with her seasonal beers, will be a selection of snacks.

The 5 minute show features 300 Intel Shooting Star drones, intricately choreographed in 3D space over the lake at Disney Springs, and all synchronized to holiday music.

Making use of Disney's recently acquired FAA license to allow drone shows on its property, "Starbright Holidays" is the first time a drone show of this size has been performed in the United States.

The video below from WDWMagic shows a preview of "Starbright Holidays," performed November 16, 2016 at Disney Springs, Walt Disney World.


This show was a preview of what is planned to be a longer show. The tentative schedule calls for 3 shows per night, from November 20, 2016 through to January 8, 2017. Viewing areas are located along the waterside promenade between Characters in Flight and House of Blues.

Just in-time for the holidays, Disney is now offering eGift cards in addition to the standard physical gift cards.

You can buy eGift cards online, and have them delivered via email. eGift cards can be used at Walt Disney World Resort, Disneyland Resort, Disney Cruise Line, Adventures by Disney, Disney PhotoPass, DisneyStore.com or Disney Store locations in the U.S.

The eGift cards are redeemable directly from your phone by scanning the barcode, without the need to print them.

Visit the Disney.com site to purchase.