January 24, 2022
The Wave, especially the lounge, was one of my favorite spots to stop for a bite at Walt Disney World.  So I was understandably upset when they announced the permanent closure.  Steakhouse 71 is what moved in instead, and it celebrates the opening year of the parks and the Contemporary Resort.  It sounded like an acceptable replacement, but of course I had to give it a try for myself.
Upon walking in, black and white photos line the walls which I loved.  The lounge has an upscale retro vibe but our table was quickly called so we didn't get to sit and enjoy that area. 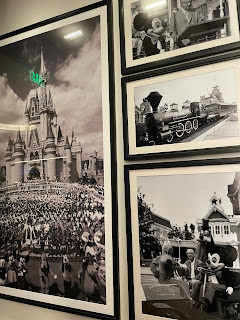 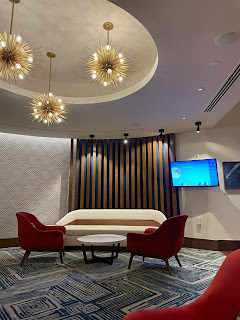 The menu sounded just wonderful, there were so many things I wanted to try.  We started off with some drinks and ordered appetizers. 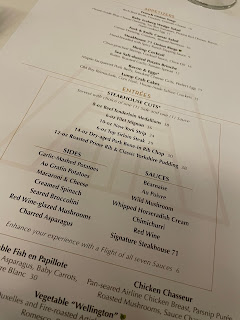 The cocktails were fine but not my favorites. I've definitely had more impressive cocktails across Disney property.  We opted to switch to wine after these initial drinks.  For appetizers we just couldn't narrow it down so we ordered one each.  The onion rings were our server's recommendation and they were great!  They are plant-based too which is great because anyone can enjoy them.  They are so light and crispy!  Next we went with the brioche bread.  I'm not a big fan of having to pay for bread service, but we gave it a try anyway.  This was the most disappointing appetizer.  It looks so buttery and golden but was dry inside. Also, it was $12! So not worth it in our opinion.  Finally, the Wave's popular appetizer "bacon and eggs" made the cut to stay on the menu so we gave that a go to see if it's as good as we remember.  It definitely was and was actually a highlight of the meal. Other appetizer options include French onion soup, shrimp cocktail and two salads to choose from.
This is where our meal unfortunately took a turn for the worst.  Our server came to take our order and when we said we were ready, he walked away.  Our water glasses and cocktail glasses were empty with no signs of refill.  We were exhausted and enjoy a leisurely meal, but this was starting to drag on and we didn't even have our entrees yet.
Thankfully, a manager stepped in to help our server and took over from here on out.  He was so helpful and patient with us, choosing a wine for the table and we ended up with Oberon which we truly enjoyed.  We got our steak orders in finally and unfortunately went back to waiting. 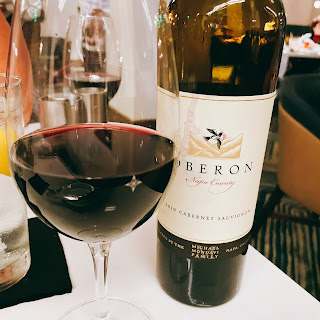 Since it is a steakhouse, we all ordered a steak but we all ordered different cuts to give them a try.  Between us we had the tenderloin medallions, the New York Strip and the prime rib.  We also opted to give the sauce flight a try because, well, why not?  I really wish I had better things to report from here on out, but there were multiple mistakes with our steaks and we were just very underwhelmed.  The NY strip was overcooked (ordered medium rare) and the tenderloin medallions were basically still mooing (ordered medium.)   Our new manager/server was quick to try to rectify the situation, but the new steaks didn't come out cooked correctly either!  He offered to try to correct them again but we were so tired at this point after a very long few days, we asked him not to try again and just wanted to settle the bill.  However, the prime rib was cooked beautifully and that Yorkshire pudding was delightful!
The mashed potatoes and mac and cheese were fine but nothing to write home about.  The sauce flight was a ton of fun though as different sauces really paired better with different steaks.  I liked the bernaise with the tenderloin, the red wine sauce with the NY strip and the au poivre (pepper) sauce with the prime rib.
Ultimately this experience doesn't have me rushing back to try Steakhouse 71 again anytime soon, but that's what's so great about Disney, I have plenty of other options to choose from!

Have you tried Steakhouse 71?  How was your experience there?  Let us know in the comments below!