For the first time, Disney will be introducing 'Rebel Rendezvous,' a ticketed merchandise event at this year's Star Wars Weekends.

On 5/15/2014, a day before the first day of the 2014 Star Wars Weekends, attendees will have the opportunity to purchase limited edition merchandise. Attending the 'Rebel Rendezvous' will be expensive - Disney is asking $250 per attendee. This does however include a Limited edition recruitment pack (includes a custom messenger bag, cadet hat, tumbler, lanyard, pin & medal set).
Registration is now open at the official Disney Merchandise site, where you can find more details and sign up.

From the Disney press release:
The Alliance leaders are summoning the most loyal Rebels in the galaxy to gather at the Rebel Rendezvous on Thursday, May 15, 2014 between 10AM and 5PM at Disney’s Hollywood Studios®.
Join the Rebel Alliance at this covert meeting place to gather supplies and other limited edition acquisitions in preparation for the upcoming Star Wars™ Weekends engagement. Look alert! The Rendezvous Point is located on the Outer Rim near the known whereabouts of Bounty Hunters and an Imperial presence!

Packages for the Rebel Rendezvous are $250 per person and include the following:

The Magic Kingdom's daytime parade is back with the brand new 'Disney Festival of Fantasy Parade.'
Click here to see the full performance, fromWDWMagic

The completely new parade features many of your favorite Disney characters on nine new floats:

The Princess Garden – This pageantry of princesses celebrates Disney royalty. Cinderella, Tiana and Belle accompanied by their respective princes, ride in a garden of topiaries with woodland creatures, birds and more. Cinderella’s dress playfully twirls like a turntable, while Swan Court couples lead the 50-foot-long majestic float, capped off with a special appearance by Anna and Elsa from Disney’s hit animated feature, “Frozen.”

Tangled – A massive long ship on the high seas showcases Flynn Rider and Rapunzel in search of adventure and another Best. Day. Ever! Rapunzel’s iconic tresses weave throughout this 36-foot-long float decked out with swaying pendulums carrying dastardly thugs.

Little Mermaid – Ariel and her friends sit atop a colorfully kinetic seashell music box that boasts an enchanting musical jubilee. There’s no shortage of whimsy on this Under the Sea float with conga dancing fish kicking up their fins and bubbles galore. Shimmering fabrics and intricately designed costumes for the Lion Fish, Coral Fish, Seashell and Sea Horse performers are runway-inspired.

Brave – Celtic couples and a vessel shaped like an enormous bagpipe announce the arrival of Merida perched high on her majestic crown. Scottish dancers step to melodies of the Great Highlands in celebration of the popular Disney*Pixar film, “Brave.”

Sleeping Beauty – The heroic Prince Phillip battles a Steampunk-inspired Dragon as the wicked Maleficent. This float stretches 53 feet in length and 26 feet tall with a prickly spinning wheel dead center of the float. With fiery eyes and glowing effects the spectacular dragon was built on an articulating chassis allowing the float to bend and flex as it moves along the parade route – a first for Disney parades. This float was designed in a partnership with Tony Award-winner Michael Curry. There’s Prince Phillip, thorn-inspired stilt performers, dramatic raven dancers, plus the three good fairies, Flora, Fauna and Merryweather glide along the parade route.

“The parade celebrates and pays homage to what the Magic Kingdom is all about,” said Randy Wojcik, senior show director Walt Disney Parks and Resorts, Creative Entertainment. “It has the most beautiful floats, enchanting characters, vibrant costumes that come to life; and the choreography is just glorious. Yet, it is also very kinetic, relevant and powerful on a scale never seen before at Walt Disney World.”

The parade has an original soundtrack inspired by favorite Disney films, composed by Mark Hammond, known for his work on World of Color at Disney California Adventure and the Flights of Fantasy parade at Hong Kong Disneyland. The parade has its own voice with a theme song customized for each float followed by a medley of songs woven throughout the cavalcade.

The 15 minute parade performs daily at the Magic Kingdom at 3:00 PM.

The winter side course of Winter Summerland Mini Golf is back open after refurbishment. The winter course closed in January 2014 without a reopening date, but work is now complete and the course is back open daily along with the summer course.

The outdoor festival will include food and beverage seminars, food and wine tastings and live music. Seminars will be led by the hotel’s chefs and certified beverage experts, while the hotel’s award-winning restaurants will showcase signature culinary selections to pair with tastings from more than 30 wineries.
Celebrity Chef Todd English will be in attendance to meet and greet with guests. English is a renowned restaurateur who has gained national acclaim through his line of restaurants and cookbooks, and other food-related enterprises. Todd English’s bluezoo is located in the hotel and features fresh seafood in a vibrant atmosphere.

With 17 restaurants and lounges, and a distinguished culinary and beverage team, the Walt Disney World Swan and Dolphin Hotel continually earns national recognition for its food and beverage program. The hotel features more than 70 certified wine sommeliers and 1,400 wine selections.

Epcot is introducing a new dessert party offering during the nighttime firework spectacular IllumiNations Reflections of Earth. For $49 per adult and $29 per child, the 'Illuminations Sparkling Dessert Party' gives guests a special viewing area in World Showcase Plaza, complete with a selection of desserts and sparkling wines.
The 'Illuminations Sparkling Dessert Party begins on 3/12/2014, and is available on Wednesdays, Fridays and Saturdays from 7:45 PM to 9:20 PM. Reservations can be made on 407 WDW-DINE.

Disney has now made MagicBands available to all Annual Passholders, giving them the ability to take part in advance reservation FastPass+ with a MagicBand or RFID pass.
To get your MagicBand, link your pass in 'My Disney Experience' and you will see an option to customize MagicBands. Choose a color and name to be printed on the band, and it will be shipped in late March, arriving in 7 to 10 days.
The MagicBand package will include the MagicBand, a discount card, and an Annual Passholder exclusive MagicSlider to customize the band. The discount card is either gold or black, with only gold indicating that parking is included. To validate parking, guests can either present a MagicBand, RFID pass, or the gold discount card. To obtain discounts on merchandise or dining, passholders will need to present either the discount card with photo ID, or the actual Annual Pass and photo ID. Ultimately, the MagicBands or RFID media will allow access to discounts and the discount card will not be required.
MagicBands are only being shipped to within the USA at this time, and no local pickup of MagicBands is available at Walt Disney World for passholders. For international guests with no USA delivery address, the only option is to continue to use the RFID ticket. 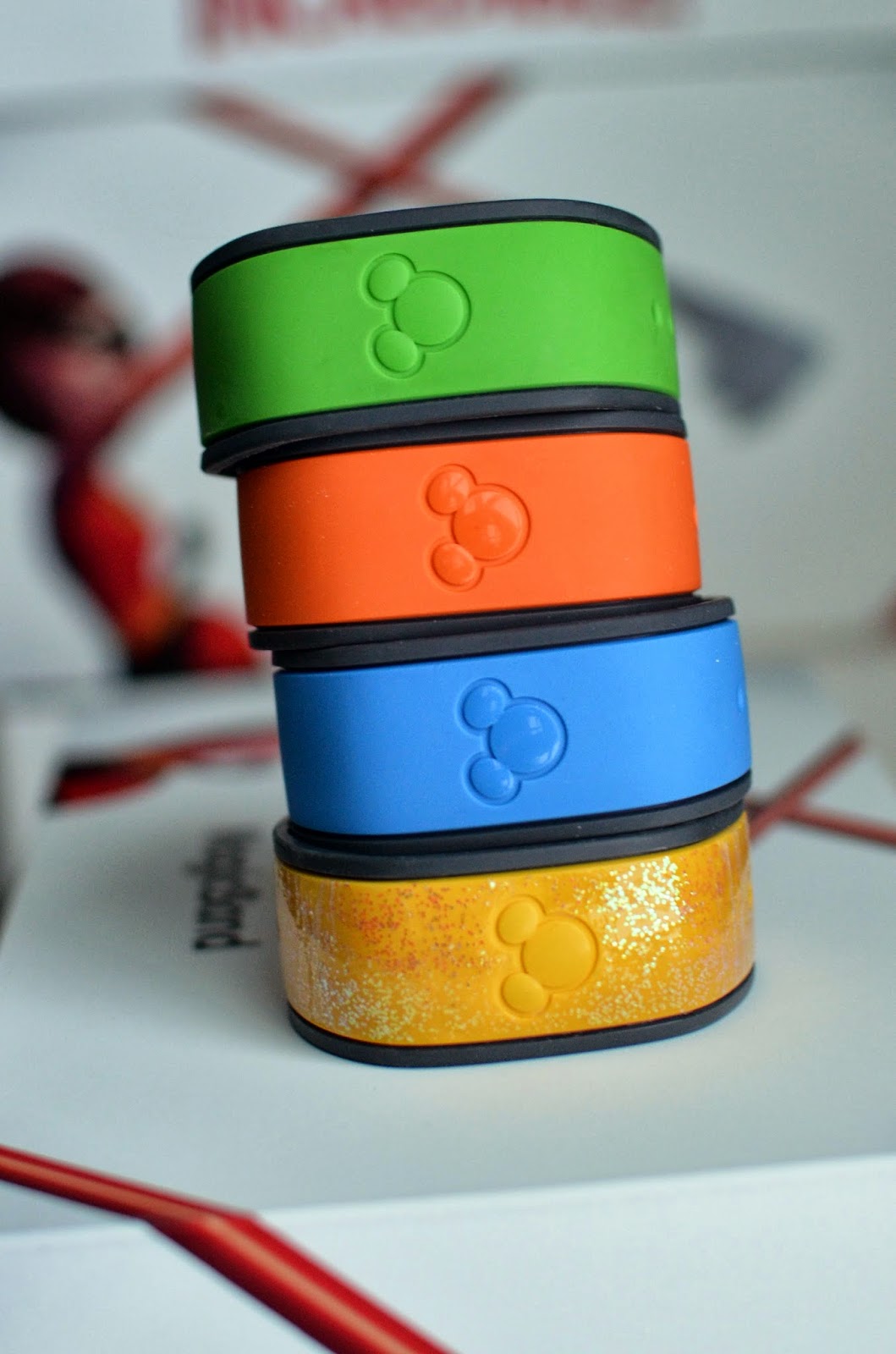 The FastPass+ reservation window has been reduced to 30 days for Annual Passholders not staying at a Walt Disney World Resort hotel.

More will be closing next week to allow construction work for Disney Springs. Beginning 3/18/2014, parts of lots E, F and G, which are all in the area outside of T-REX and Pollo Campero in the Marketplace, will be closed. The affected areas are the top side of the lots, closest to T-REX and the other buildings.

The overflow parking options at Team Disney and the Casting Center remain in use as required, so if parking at Downtown Disney, be sure to follow signs to these overflow areas