The Epcot International Food and Wine Festival will be longer than ever next year, beginning for the first time in August.

Express Bus Transportation is coming to Walt Disney World later this month, enabling quicker transfers between its theme parks, for a price.

Costing $15 per person for a single day, Express Bus Transportation will pick guests up directly inside the parks, then by making use of backstage areas, will reach the destination faster than using the regular bus service. 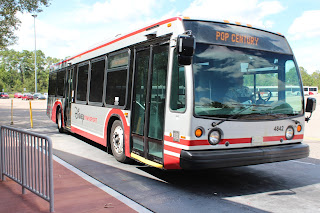 The service can be added when purchasing Park Hopper tickets, or upgrading at a later date via guest relations. In addition to the $15 per day option, there is also the ability to add multi-day service for $24 per person. Annual Passholders can purchase the service on a per day basis.

Express Transportation began on December 7, 2016, and will operate from 10:00 AM to park close, departing every 30 minutes.

The Magic Kingdom pickup area will be by the Buzz Lightyear Space Ranger Spin exit, Epcot near to Guest Relations by Spaceship Earth, Disney's Hollywood Studios near to Rock n Roller Coaster courtyard, and near Kilimanjaro Safaris entrance at Disney's Animal Kingdom.

The white water river raft adventure now opens an hour after park opening, which means a 10:00 AM start for most of December, and 9:00 AM for the busy Christmas week when the park opens at 8:00 AM.

Kali Rapids will close for a month long refurbishment on January 3, 2017.

T-Rex Cafe at Disney Springs is offering a special breakfast buffet experience this Christmas, including a photo op with Santa and early bird shopping at World of Disney.

The breakfast buffet includes:
A T-Rex Retail Discount of $10 off a $50 purchase is also included with Breakfast with Santa!

"Star Wars: A Galactic Spectacular” will return to Disney’s Hollywood Studios on December 16, 2016.

The Star Wars nighttime spectacular will join the holiday themed “Jingle Bell, Jingle BAM!” as a second nightly fireworks spectacular at the park through December 31.

The seven-hour tour includes:
Younglings ages 4-12 on the guided tour package can also train in the way of The Force in Jedi Training: Trials of the Temple.

Priced at $129 per person, tours begin January 2, 2017 and will be offered on Mondays and Saturdays throughout 2017. Reservations for January tours can be made soon.

The “Star Wars: A Galaxy Far, Far Away” stage show will receive an update later this month to include elements from the upcoming "Star Wars: Rogue One" movie.

Guests will get a first look at AWR Troopers from “Rogue One: A Star Wars Story.” Outfitted in their specialized Stormtrooper armor with a dark, ominous gleam, these soldiers serve as bodyguards and enforcers for Director Krennic, a highly placed officer within the Advance Weapons Research (AWR) division of the Empire. A new Troopers sequence will join the show December 16, 2016.

Celebrating the upcoming 'Rogue One - A Star Wars Story,' Epcot's Spaceship Earth transformed into the Death Star for a one night event.

Using lasers and digital projection mapping with imagery supplied by Industrial Light and Magic, the 180ft tall Epcot icon took on a very different look. See the video below or by clicking here.

In a new "What's New, What's Next" press release, Disney points to a 2017 opening for Rivers of Light.

The Animal Kingdom nighttime spectacular has faced numerous technical difficulties during its development, and missed its publicly announced April 22, 2016 opening. Since then, Disney has remained silent on the show's future, although recent Cast Member previews over the last few weeks have given hope of an impending opening.

Of course, Disney may be playing it safe with such a vague timeline, but this new press release is the first official update since the Spring delay. Here is the full text:

Rivers of Light – Coming in 2017, this powerful theatrical production takes Disney’s Animal Kingdom guests on a magnificent emotional journey – a visual mix of water, fire, nature and light choreographed to an original musical score. Continuing the park’s transformation from a day-into-nighttime experience, the amazing after-dark show on the banks of Discovery River celebrates the majesty of nature and the connection between animals and humans in the world. With innovative and never-before-seen technology, Rivers of Light will be unlike any other production ever staged at Walt Disney World Resort.

The Magic Kingdom's ticketed event, "Disney After Hours" will make a return in the new year, at a drastically reduced price.

Originally priced at $149 per person when it launched last Spring, the event will now cost $119 plus tax for ages 3+.

Like before, the event gives guests extra time in the park to enjoy attractions after regular park closing. There are 7 dates currently planned, January 20 and 27, February 2, 9 and 16, and March 2 and 9, 2017.

Disney After Hours at the Magic Kingdom tickets get you into the park from 7pm, lasting for 3 hours after regular park close, and includes complimentary ice cream novelties and beverages.

Extra Magic Hours for Disney resort hotel guests are not impacted by this event, with Disney After Hours taking place on non-EMH nights.

Attractions operating will include:

Disney has updated its iOS "My Disney Experience" app to include new PhotoPass editing features.

You can now add stickers, filters, borders and crop to purchased images, which can then be saved to your device camera roll for sharing.

The update is available now.