December 27, 2021
I have dined at Toledo twice. Shortly after Grand Destino Tower at Disney’s Coronado Springs opened in 2019, I ate there with my mom, and most recently with my fellow agent Maci during our visit for Magic Kingdom’s 50th Anniversary.

Located on the 16th floor, the atmosphere at this dinner only restaurant is just lovely. Floor to ceiling windows with tasteful décor offer lots of light. You will get a view of all the parks, but some are certainly better than others depending on which area of the restaurant you dine in. Even if you aren’t facing the windows, the ambiance of the orange and pink stain glass on the ceiling and greenery from the trees in the restaurant are a welcome sight. 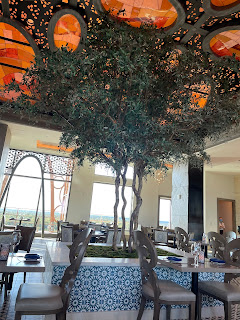 Toledo is self described as serving Tapas, Steak, and Seafood. I ended up only ordering tapas and drinks both times I dined here. On my first visit, my mom and I weren’t too hungry and on my most recent visit, they were unable to serve us the special 50th Anniversary dish because it was technically the day before. Alas! In 2019, we ordered what is now half of the Pintxos, Pan con Tomate (not pictured, and neither of us were a fan) and the Tequila Daisy. 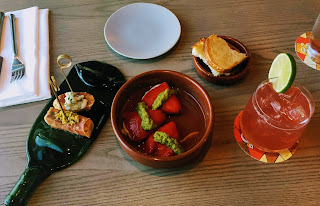 We enjoyed the 'Tortilla Española' Spanish Potato Omelet and Valdeón Blue Cheese with Fig and Honey, but we didn’t enjoy sharing these adorably sized bites. Yes, it’s tapas - we could have just ordered more. The pintxos was the star for me food wise. Each bite was bright and full of flavor. You can now find them as a side dish. The Tequila Daisy was refreshing on a warm day.

Even though we weren’t terribly hungry when we arrived, we still felt that the portions were pretty small for the price compared to options elsewhere. Regardless, my mom loved the views and we had a wonderful time trying a new restaurant together.

When Maci and I sat down we immediately knew we wanted the Spaniard for two. We also ordered some drinks. I ordered the Tequila Daisy again and Maci ordered the Sangria Martini. While I certainly enjoyed the same drink (I clearly have a type. Spoilers: it’s tequila), the sangria was just a little bit better. 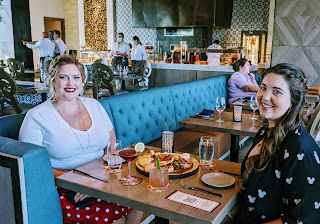 The Spaniard for Two is Toledo’s charcuterie board. Everything on it was delicious! Well, everything we tried. Full disclosure- neither Maci or I like olives, and we found that out after the board arrived. We both incorrectly assumed the other person would appreciate the extra. The way they introduced every item on the board as it was set on our table made me feel like we were in for a treat. Many times when I enjoy cheese and meats at a restaurant in this style, I feel pretty confident that I could replicate something similar at home. For this board, I don’t know that I could say that for most of the meats. Every combo that we had was a delight! 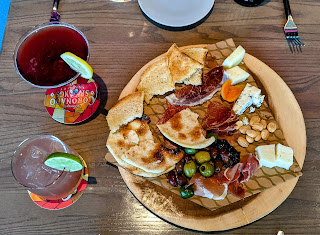 I would recommend Toledo for a date night, but with a caveat. As much as we enjoyed our time here, the bill was a little under $100 for the Spaniard for Two and three drinks plus tip. This isn’t particularly steep for a delicious meal for two at Walt Disney World, but as we spent similar amounts for significantly more food that was just as good if not better, it made me less interested in going back. That doesn’t mean I won’t. I would definitely like to try some of their entrees, and perhaps then my mind will be changed. In the meantime, this one isn’t quite going to make my “must do” Disney dining list.

Elizabeth Guffre
Elizabeth's priority as your travel consultant is to make your vacation as fun and stress free as possible. You can email Elizabeth at liz@kingdomkonsultant.com.

September 07, 2022
I recently sailed on Royal Caribbean Cruise Line's Liberty of the Seas for my Honeymoon.  The trip itself was quite amazing, but we had a special dinner at Sabor that wasn't on any pre-planning options.  While at dinner at the Chef's Table earlier in our cruise, a nice gentleman from Sabor came by and told us about a similar experience they were trying out at that restaurant.  Of course we decided we had to give it a try! We got the menu to look over and our host for the night came to greet us and go through what to expect etc. This was a new thing they were trying, so we didn't really know much about it going in other than "if you liked the Chef Table, come try this!" He was wonderful, and we had a great time with him. We were at a big table off to the side as you went in (our whole Chef's Table party decided to go for this, so we were old friends at this point!) The table was semi-private, but still somewhat part of the normal dining area so we could pee
Post a Comment
Read more

August 26, 2022
Breakfast at Topolino's has been getting quite the hype since it opened, so I was thrilled when I snagged a reservation with my fellow Agent Maci on our trip to celebrate Magic Kingdom's 50th birthday. This restaurant is located on the 10th floor of Disney's Riviera Resort, the newest to open on Walt Disney World property. The décor is modern and bright, with floor to ceiling windows and a balcony to continue to take in the views right outside. Breakfast is a character dining experience, with Mickey and friends being dressed in their artsy best! Park attire is welcome, but you could just as easily get a little fancy and feel comfortable. We were told it would be about 10 minutes so we went to the bar where I ordered a Bellini and Maci got a Mimosa, light on the OJ! The excellent bartender barely had time to make our drinks before our table was ready. We were quickly greeted by our server Chris from Orlando and we're pretty sure we found the OG! For
Post a Comment
Read more