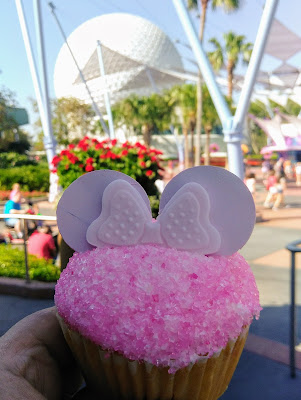 In case you didn't know it, Rose Gold is so over. The color du jour is "Millennial Pink", (aka baby pink, bubble gum pink, cotton candy pink, or just plain old light pink). Disney Parks have hopped on board with the trend, and are offering various snacks adorned in the hue. Just this past week I was able to try out a couple of these treats, so allow me to share with you these pinkalicious wonders! 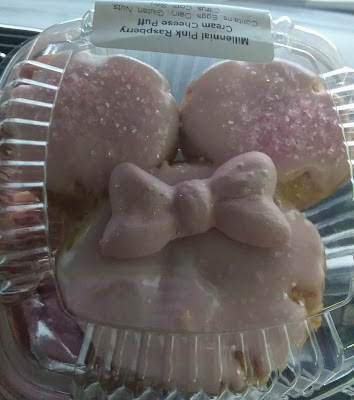 This little lady was super unique and interesting. Found in the chilled display case in the Market; it looked more like a doughnut than a cream puff. The mouse-shaped pastry had a millennial pink icing over the whole thing, a white chocolate bow on top, and a few pink sanding sugar sprinkles for decoration. It was made up of three separate cream puffs, stuck together. As you can see, the sticker called it a "raspberry cream cheese puff." What does that mean? Was it going to be like cheesecake inside? A sweet cream cheese with pureed raspberries? Well, wonder no more... 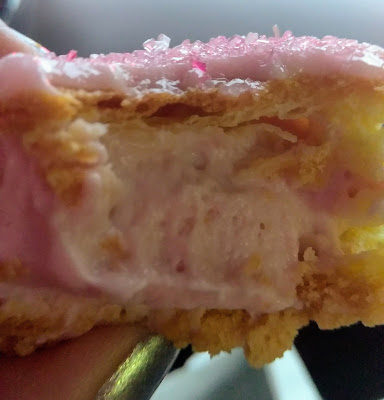 The choux pastry was really nice. It wasn't dry at all and had a nice sweetness to it. The icing was just a basic royal icing, with no real flavor. The bow went to the hubs, because I do not enjoy white chocolate. Now, the filling... It was a sweetened, raspberry flavored cream cheese mixture. At first, I wasn't really sure what to think of it. It was sweet and creamy, but even more tart and tangy than cream cheese filling would usually be. I was struggling to decide if I liked it or not, so I kept eating it. Turns out, I did like it, because next thing I knew, I had eaten the whole thing! There was tons of filling inside each of the three puffs and I really ended up loving it. The sugary sweet icing balanced out the tangy filling and the pastry was some of the best puff pastry I have ever had. I highly recommend you give this one a shot, but only if you like cream cheese filling... like, A LOT. I know I'll be going back for another! 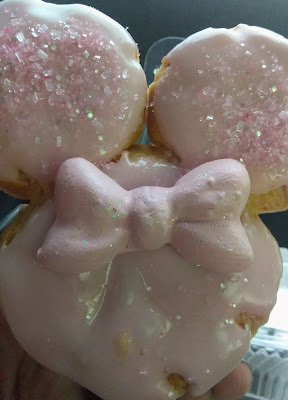 Found in the pre-packed case at Epcot's Starbuck's location, this beauty was MADE for picture-taking! I mean, come on! SO cute! It was a vanilla cake, filled with a strawberry pastry cream. The top had vanilla buttercream frosting, pink sugar sprinkles and a fondant set of Minnie ears and bow. I liked this cupcake a lot. The strawberry cream was light, refreshing and not overly sweet. The buttercream was a perfect amount and it was coated in sprinkles. Personally, I would prefer some other type of sprinkles over straight sugar, as I find sugar crystals to be an oddly crunchy topping, but that's just me. The ears were also quite yummy. I love fondant and prefer it to white chocolate any day. I'd get this cupcake again, for sure.

Compared to the cupcake above, from the Fountain View, this cupcake was a little more ornate, but kind of gaudy looking to me. Don't get me wrong, I love glitter, but this one was kind of like Tinkerbell exploded on it. And, I don't think I'd classify this as "Millennial Pink." To me, this confection was more hot pink than anything. Still pretty to look at, but a little extra.

This cupcake was located in the refrigerated case at The Mara, (Jambo House's counter service location, at Animal Kingdom Lodge), pre-packaged in a plastic case. The cake was chocolate and filled with an airy raspberry mousse. The frosting was a pink vanilla buttercream, and then it was topped with (lots of) edible glitter, a fresh raspberry and white chocolate Minnie ears. Because these cupcakes are kept in a refrigerated case, it was cold, and therefore the frosting was a solid blob and the cake was a little stiff. I'd recommend letting it sit out for a bit before eating it. Flavor-wise, it was very nice. The mousse was light and creamy. I could easily eat just a cup of that! The buttercream was very good too. I tossed the ears since, again, I don't do white chocolate. (It isn't even chocolate! It only calls itself that!) Overall I'd say it was enjoyable, but I much preferred the vanilla/strawberry combo from the Fountain View. 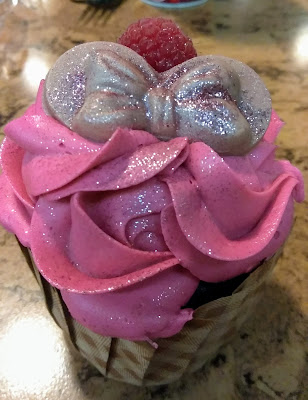 Ok, so I will admit, I made a special trip to The Magic Kingdom for this shake. I mean, it looks like a candy-covered dream come true! Here's the Disney promo pic:

I am sad to report that it didn't look quite as impressive in person. Here's mine: 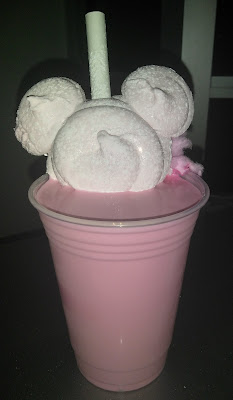 It seems that they don't give you nearly as much cotton candy as appears in the promo picture, and I get why: as soon as the cotton candy hits the moisture of the shake, it dissolves into a gooey mess. In fact, if you look closely at the promo shot, they kind of cheated and put a lid on the shake, before putting the candy floss, (old timey name for cotton candy), on top.

Speaking of lids.... I really wish this shake included one. Wanna know why????

I don't usually use pictures that show my kiddo's faces, but this one is pretty fuzzy and timed PERFECTLY. Don't worry, we didn't lose the whole thing! We were still able to try it out.

The shake itself was strawberry flavored and I'd say it was more similar to the flavor of strawberry milk than to that of actual strawberry ice cream. It was super sweet and kind of a weird, goopey consistency, which I believe was due to the dissolved cotton candy. The marshmallow was pretty amazing, though. It was clearly a handmade marshmallow, with a light fruity flavor and sparkly edible glitter on it. We enjoyed that more than the shake itself. In fact, after a couple of sips each, we were kind of all done with the shake and ended up tossing it in a trashcan.

Overall, this pink treat was pretty to look at, and I'm glad we tried it, but I wouldn't get it again. It was my least favorite of my Millennial Pink dining experience.

What sounds good to you? Will you be trying some Millennial Pink treats for yourself? Oh, don't worry, Rose Gold fans, there' still plenty of that pinky-gold sparkle to be found in the parks! 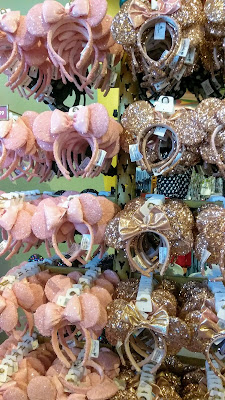 If you need help planning your next trip to any of the incredible Disney Parks, the crew over at Kingdom Konsultant Travel would be tickled pink to help you! (See what I did there?) Contact an agent today!

Until next time, you trendy Disney snackers, have a MAGICAL week!