Epcot International Festival of the Arts 2022 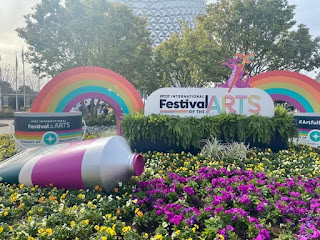 The Epcot International Festival of the Arts is a combination of numerous displays of art through food, music, visual art and even art you take home to enjoy for years to come. I came to this event only one other time a couple of years ago and have been dying to come back ever since. We moved to Florida this past summer so now was my chance & I got to share my excitement with my husband.
They don’t open any of the booths until 11am so we had a little time to get an Art Festival gift card wristlet. It helps me to have that band so I don’t have to pull out a credit card every time I want to eat. 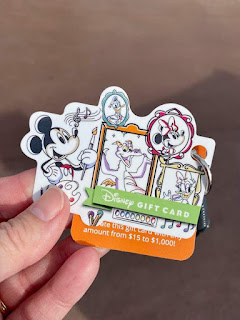 By the time I bought it and added money to it, the booths were open so off we went. We started at the “Deconstructed Dish” booth with the deconstructed BLT and the deconstructed Key Lime Pie. We weren’t that impressed with the BLT, thinking it was kind of plain with each piece separated, but we loved the Key Lime pie. 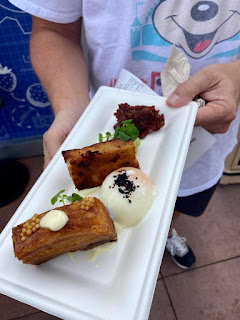 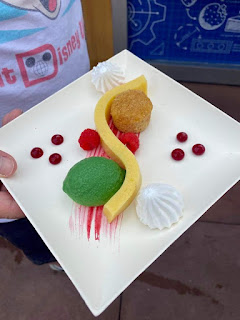 The next food booth we ate at was the Encanto Cocina, between France and Morocco. We split the Chorizo & Potato Empanada. It was a little spicy for both of us, but the aioli drizzled on top helped cool down the spices. Overall, it might’ve been my favorite food item of the day. 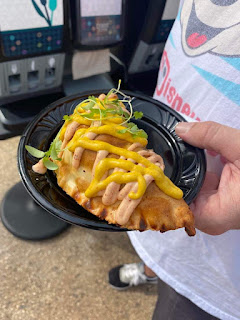 As we walked to enjoy more food, we had a chance to look at the various art pieces for sale located throughout all of Epcot. As well as having a chance to look at how each artist expresses him or herself with different mediums (on canvas, metal, wood or using paint, chalk, etc.), we also had the chance to see how each artist has a different way of how they “see” Disney characters in their minds. It is amazing to me! Each booth was another “oh yes, I can see that too” type of moment for me. One more aspect of this Festival that you can enjoy is that many of the artists are here for you to meet in person. You get the chance to talk to them about their art and, if you buy one of their pieces, they will sign it & personalize it for you. 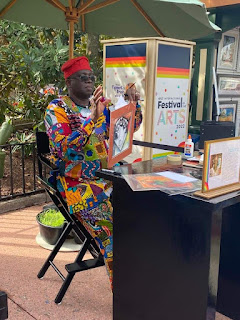 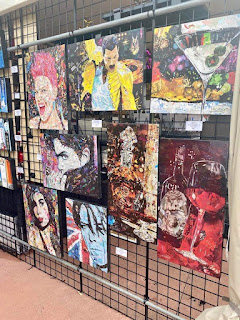 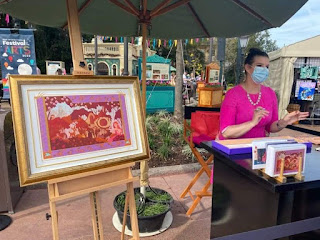 The next food booth we visited was “The Artist’s Table” in the section of America. We chose the Beef Wellington and the Pan-seared Scallops. I’m not a big scallops fan, so my husband “took one for the team” and ate every morsel of it. He loved the combination of scallops with the vanilla-butternut squash puree pairing. I thought the beef paired with a red wine demi-glace was also a great selection.
One booth I usually like to try out is the “Animation Academy” where you get a chance to try to draw a Disney character with an actual artist. They are now offering this outside at the American Gardens Theater at only two different times. We missed both times they were doing the drawings, but I am sure Walt himself would be grateful since drawing isn’t my skill. 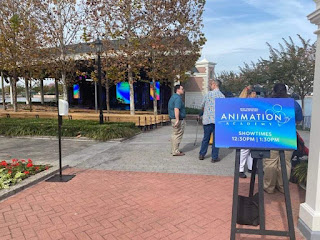 Another piece of the fun at the Festival is the photo ops. We felt a little silly trying to look like ‘Mona Lisa’ or the face from ‘The Scream,’ but we were there to enjoy it all, weren’t we??? 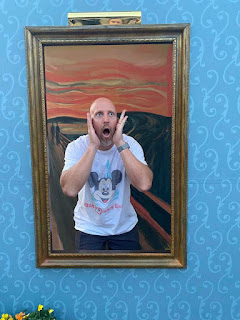 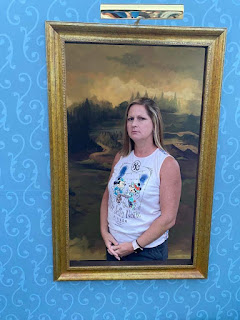 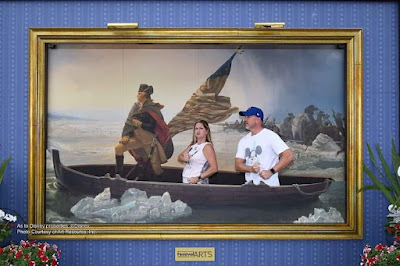 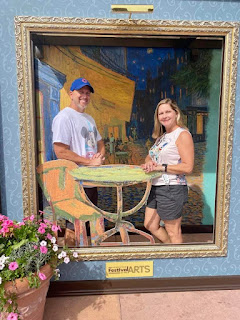 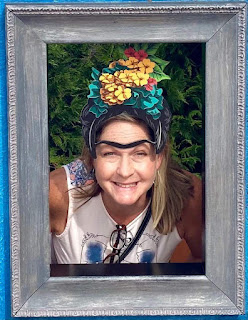 We made sure we participated in the “Expression Section: a Paint-by-Number mural,” admired the Chalk Art and watched some Chalk Art in progress. 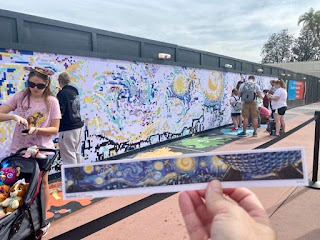 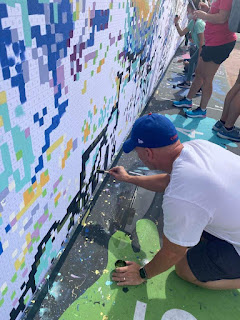 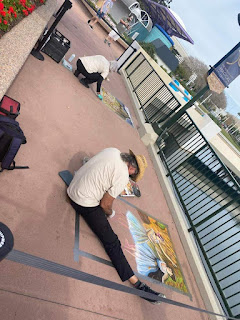 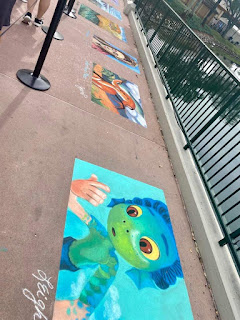 Before we left, we made sure we devoured more food items such as Tomato Soup with Bacon (do NOT miss this soup, even if it’s hot outside), Apple & Brie Grilled Cheese and Almond Frangipane Cake at the Pop Eats stand (that cake was pretty sweet), Blood Orange-braised Beet Carpaccio in Canada (my husband loves beets so he said this was good) and ended the feast with the Vanilla Donut with Strawberry ice cream at the Donut Box (huge portion and just the right amount of strawberry for us). 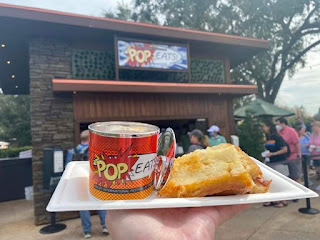 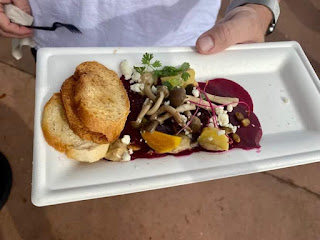 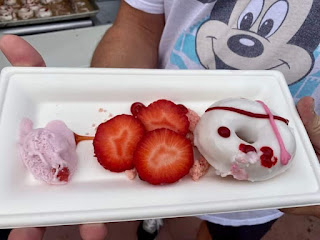 We did complete the “Wonderful Walk of Colorful Cuisine” by eating the five menu items so we could get a complimentary culinary treat, but we were so stuffed that we decided we will save it for another day to redeem. 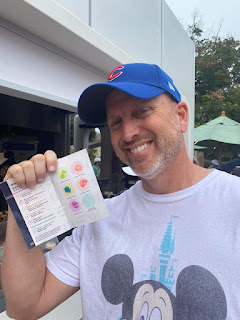 We ended the day at the “Disney of Broadway Concert Series” to hear Arielle and Adam Jacobs. We were so glad we did! She previously played Jasmine and he previously played Aladdin, but not at the same time since they are siblings. They are both incredible singers and performers and kept us very entertained. They sang songs not just from Aladdin, which was familiar to them, but also from other Disney shows like The Lion King, Newsies and High School Musical. We were definitely disappointed when the 25-minute set was over. 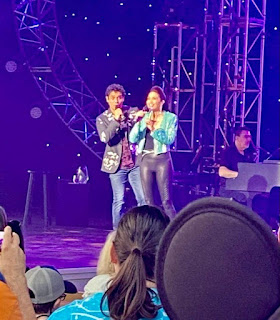 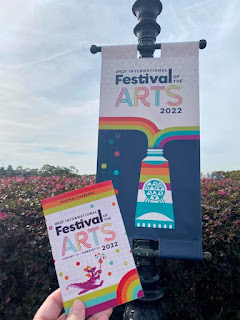 As we left the park, we reflected on our day. It was a long day, but a good one filled with so many forms of art that we knew it was a day well spent at Epcot. I hope that you can go with your family and have as much fun as we did.
The Festival of the Arts began on January 14th and runs through February 21, 2022.

Pam Gaston
Pam G (or PG) is a new Floridian and is taking advantage of the close proximity to Disney World as much as possible! You can email Pam at pamgaston@kingdomkonsultant.com.