In Part 1 of our Walt Disney World 50th Anniversary Foodie Guide, Agent Maci kicked off our series to review the new sips and bites you can find around the Walt Disney World Resort for the World's Most Magical Celebration. The celebration continues for the next 18 months so you'll have plenty of time to try these new tasty treats. We did our best to chip away at the extensive list of celebration food and drinks on our trip over the 50th Anniversary kick-off weekend so we could report back to you. It's a tough job, but somebody's gotta do it!

The Caramel Apple Tart dessert at the ABC Commissary was absolutely delicious! I'm a fan of cheesecake and any apple desserts so I was very happy that this dessert didn't disappoint. The cheesecake is rich but it's a decent size so you can easily share it with a few people. It also looks really cute. For $5.49, I thought this was a really good value for a dessert that you can share. I would happily order this again. 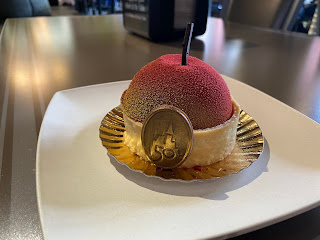 The Glimmer and Shimmer Blondie sounded really good so I was really bummed when it didn't live up to my expectations. I thought it was good but it was way too sweet. It also would have been way better if it was served warm with vanilla ice cream on top instead. We split this dessert and all of us agreed that it was just lacking. If you do decide to try this treat, it's another great one to split and at $4.49, is a good value if you actually like the flavor.

Brew-Wing at the EPCOT Experience (EPCOT)

EARidescent Croissant Doughnut - Croissant Doughnut with Blue Icing and Sprinkles
When I heard that the croissant doughnut was coming back to Epcot, I was SO excited! This was one of my favorite treats in all of Walt Disney World so it makes it even more disappointing that I didn't like this 50th anniversary treat. The icing was too sugary sweet and overpowered the flavors of the croissant doughnut which in my opinion is pretty awesome by itself. If this was served with less icing it would be enjoyable but as it is, I just couldn't enjoy it. I'm so sad to report that I would not order this again. It was very pretty though and the EARidescent sprinkles were cute but that was all it had going in its favor.

Tropical Serenade - Pineapple-Orange-Guava Juice, Coconut Soft-serve, and an Upside-down Pineapple Cake Pop
Aloha Isle has quite a few treats to celebrate the 50th anniversary but on this trip I opted to only try one. I tried the Tropical Serenade and it was delicious! I loved the Kakamora Float that had previously been available at Aloha Isle so I was happy that this new treat was as enjoyable. (I still prefer the Kakamora Float but this one was right up there in my book.) The cake pop was also really good. If you like POG juice and coconut, this is a must try snack!

Mr. Toad Dome Cake - Peanut Cake, Chocolate-Peanut Butter Mousse, and Salty Caramel Center
I thought this dessert looked and sounded really good when I saw it on the menu but it was neither of those things in real-life. The chocolate topping with Mr. Toad on it was very cute but the dome cake looked like it was covered in yellow mustard. It did not look appetizing. I tried not to judge a book by it's cover and was trying to stay optimistic that it might taste better than it looked. Again, I was disappointed. The flavors just weren't good and the inside looked like cat food which really messed with my mind while I was trying to eat it. I would save your money and avoid this lackluster dessert.
The Wild Ride - Frozen Wild Sour Cherry, Blue Raspberry, and Sour Apple topped with Whipped Cream and a Black Licorice Wheel
While at the Friar's Nook we also tried The Wild Ride drink. I was hoping this snack would be better than the dome cake. It was only slightly better. The sour apple was really sour. I guess I shouldn't be surprised since it said in the description "sour" apple but I underestimated the level of sourness. The cherry and raspberry were much more enjoyable and those part of the drink were very refreshing on a hot Florida day. The licorice wheel was as hard as a rock so I wouldn't recommend eating it. It's a much cuter decoration than it is tasty. Even though I enjoyed parts of this drink, I wouldn't order it again.
Next time I visit the Friar's Nook I plan on trying The Toad Burger, which looked really cute and hopefully tasted better than these two items!

50th Celebration Hot Dog - All-Beef Hot Dog topped with Strawberry-Bacon Jam, Crisp Funnel Cake Pieces, and Powdered Sugar
This snack sounded so weird to me when I read the description but to my great surprise, the flavors worked really well together! The strawberry-bacon jam with the hot dog, funnel cake and powered sugar was actually really tasty. I found my crisp funnel cake pieces just a little too crispy but other than that, I really liked this dish. 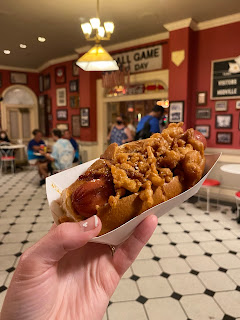 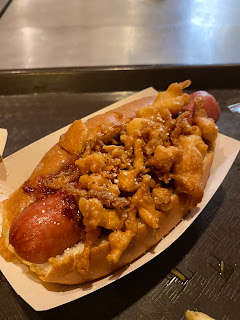 50th Anniversary themed Cake Pop
I tried this 50th treat by pure accident. I had originally ordered the Pressed Penny Silk Pie (another 50th celebration treat) but by the time I went to Casey's Corner they were out. I was really bummed but the sweet Cast Member offered to give me a 50th Anniversary themed Cake Pop and a couple bottled waters to make up for it. :) This Cake Pop is available if you order the 1971 Meal from Casey's. The Cake Pop was very tasty and reminded me of Hostess Ho-Hos. If you're a fan of Ho-Hos, you'll enjoy this Cake Pop!

Our lunch at Liberty Tree Tavern was enjoyable, as always, and we also managed to try all of the 50th beverages and an entrée on our visit. There are four specialty beverages available at Liberty Tree Tavern; two that contain alcohol and two non-alcoholic options.
Pennsylvania Pot Roast - Our Famous Pot Roast with Mushrooms, Pearl Onions, and Carrot in a rich Gravy
The Pennsylvania Pot Roast was delicious! It had really great flavors and I would happily eat it again.
Tavern Punch (Non-Alcoholic) - Frozen DOLE Whip® Lemon and Sprite®
The Tavern Punch is a frozen, non-alcoholic drink, so it's perfect to cool down on a hot Florida day.
I Cannot Tell a Lie (Non-Alcoholic) - Vanilla and Cherry Shake garnished with a Brown Sugar-Graham Cracker Rim
This was the beverage that I ordered with my meal and although I thought it was really tasty, it felt more like a dessert than a beverage. Since it was a shake, it was a little heavy and took up a lot of real estate in my stomach that could have been filled with the fabulous food instead.
Liberty Sangria - Red Wine with hints of Apple and Spice
No complaints from the diner who ordered the Liberty Sangria! She said she would absolutely order it again so it must have been good.
Spirit of '76 Cider Shandy - Sam Adams Lager topped with Angry Orchard Crisp Apple Hard Cider
My husband ordered this drink and he didn't like it so I ended up drinking it. I thought it was pretty good but it wasn't my favorite. I don't think I would order it again but I'm normally not a Hard Cider fan so I'm not the best judge.

EARidescent Sip-a-bration (Non-Alcoholic) - Minute Maid Premium Lemonade, Fruity Strawberry Punch, Served in a souvenir 50th Celebration Cup with a Surprise Character and a little bit of magic.
This was the non-alcoholic 50th beverage option at Citricos and I figured I'd give it a try. The way this drink works is really cool! You are brought the Minute Maid Premium Lemonade in your 50th celebration cup and a special character (in my case, Mickey Mouse) to drop into your drink to make some magic. As your surprise character dissolves in the lemonade, you are left with an EARidescent treat! The drink was good but a little sweet. The iridescent shimmer of the drink was really neat. I think this is something that kids and adults will find enjoyable. I'm looking forward to trying some more of these EARidescent drinks on future trips.

Want to see a full list of all the sips and bites you can try? Check out the 50th Anniversary Celebration Sips and Bites Guide on the My Disney Experience mobile app. There are over 100 new food items to try so stay tuned for more in this series as we continue to try these new treats over the next 18 months.

What has been your favorite celebration treat so far? Let us know in the comments.